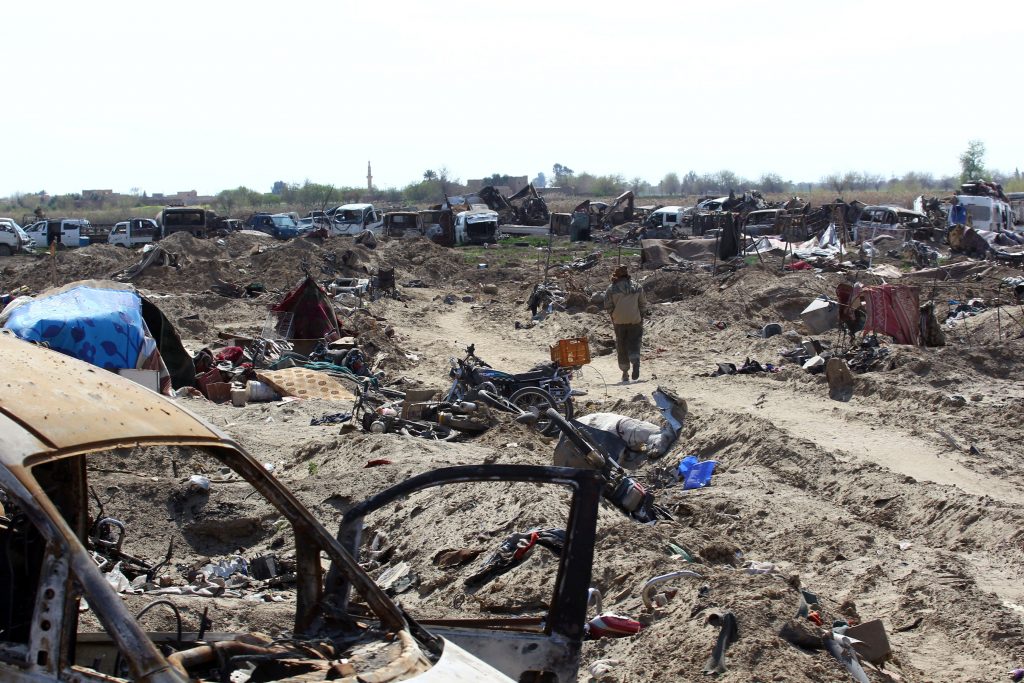 U.S.-backed Syrian fighters on Sunday were clearing explosives in the last area retaken from the Islamic State terror group a day after declaring military victory over the terrorists and the end of their self-styled caliphate.

A spokesman for the Kurdish-led Syrian Democratic Forces who goes by the nom de guerre Mervan the Brave said Baghouz, the village where the terrorists made their final stand, is “full of all kinds of explosives.” He said SDF forces were clearing the area and have detonated land mines and suicide belts the terrorists left behind.

A Syrian driver working with NBC News reporters was killed Saturday by an explosive device that went off in a house used as an SDF command post and a media center for journalists covering the fighting in Baghouz.

Noah Oppenheim, the president of NBC News, said in a statement that network employees escaped unharmed. He expressed “deepest sympathies” to the driver’s family and loved ones.

“We are still gathering information from today’s events, and are in touch with the driver’s family to support them however we can,” he said. It was not immediately clear what caused the explosion.

The victory announced in Baghouz on Saturday marks the end of a devastating five-year campaign by an array of forces to retake territories held by IS in Syria and Iraq. At its height, IS controlled a sprawling self-declared caliphate the size of Britain that was home to some 8 million people. The campaign against the group came at a staggering cost, with entire neighborhoods and towns destroyed across a swath of Syria and Iraq.

Unknown numbers of terrorists and supporters are believed to have gone underground, and the group has continued to carry out terror attacks in areas that were liberated months or even years ago.

It’s not known whether the group’s leader, Abu Bakr al-Baghdadi, is still alive or where he might be hiding.

“This is an historic moment, but we cannot be complacent,” tweeted Maj. Gen. Christopher Ghika, the deputy commander of the U.S-led coalition against IS.

“Even without territory, Daesh will continue to pose a threat to the people of Iraq and Syria, as well as to the wider world. The coalition must remain firm in its determination to counter Daesh,” he said, referring to the extremist group by an Arabic acronym.

Thousands of people, including IS terrorists and their family members, left Baghouz in recent weeks and were taken to detention centers and camps for the displaced elsewhere in eastern Syria. The terrorists were holding hostages and had detained civilians, whose fate remains unknown.