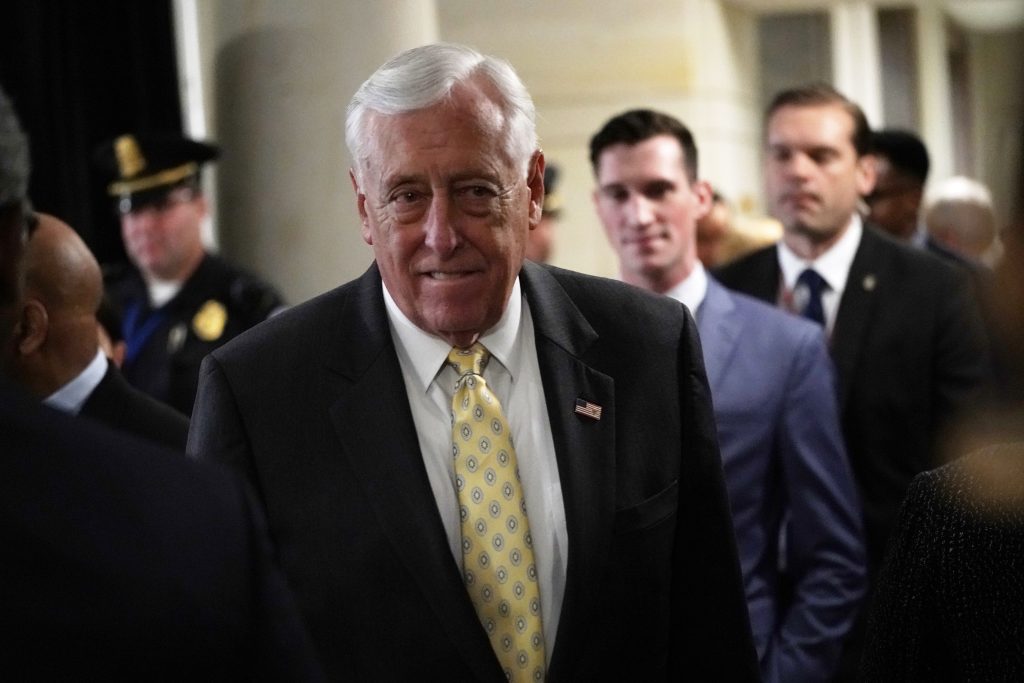 Hoyer, a longtime ally of Israel, came down squarely on the side of standing with Israel at a time when younger Democrats and some contenders for the party’s 2020 presidential nomination criticize Prime Minister Benjamin Netanyahu’s rightward shift and his moves closer to President Donald Trump and Republicans.

“I stand with Israel, proudly and unapologetically. So, when someone accuses American supporters of Israel of dual loyalty, I say: Accuse me. I am part of a large, bipartisan coalition in Congress supporting Israel. I tell Israel’s detractors: Accuse us,” Hoyer said at the American Israel Public Affairs Committee’s annual conference at Washington’s Convention Center.

The meeting was supposed to ease tensions between Muslim and Jewish Democrats. It ended with tears

Hoyer’s “dual loyalty” remarks served as a rejoinder to Rep. Ilhan Omar (D-Minn.), the first-term lawmaker whose recent remarks have sparked the heated debate inside the Democratic caucus and across the nation among liberal activists.

This month, Omar suggested Israel’s supporters are motivated by political donations and have “allegiance” to a foreign country, sparking a messy public reckoning over anti-Semitism. That led to several days of heated debate among Democrats about whether to condemn those remarks, before they eventually reached a compromise on a broadly worded resolution that condemned many forms of hate.

But the issue has not gone away. A new resolution sponsored by Reps. Jerrold Nadler, D-N.Y., and Bradley Schneider, D-Ill., rejects the global boycott, divestment and sanctions movement, or BDS, which tries to apply economic pressure to compel Israel to change its policy toward the Palestinians. Israel’s allies in Congress say the changes BDS supporters want would effectively end Israel’s identity as a Jewish homeland.

AIPAC backs the resolution, and Hoyer on Sunday threw his full support behind it with a promise to “defeat BDS.”

The organization’s annual Washington gathering is reviving many of the heated discussions from early March. Hoyer was the first of several top-ranking Democrats to speak to the powerful group, followed later this week by House Speaker Nancy Pelosi of California and Senate Minority Leader Chuck Schumer of New York.

Netanyahu, who arrived in Washington on Sunday, meets with Trump on Monday and will address the conference Tuesday just weeks ahead of a tense reelection battle back home.

Hoyer began his remarks by explaining that, although he is not Jewish and does not have many Jewish constituents, he has traveled to Israel 15 times, many of those AIPAC-sponsored trips with him serving as the lead Democrat.

He delivered some mild criticism – that the United States and Israel at times fail “to follow our own ideals” – but he said politicians do a disservice to that by using tropes about Jews and money. In early February Omar suggested that U.S. politicians had a loyalty to AIPAC that was “about the Benjamins.”

“What weakens us, though, is when, instead of engaging in legitimate debate about policies, someone questions the motives of his or her fellow citizens or tries to silence others through exclusion, disenfranchisement, or fear,” Hoyer said.

“In a region of dictatorships and dynasties, Israel remains a beachhead of freedom and representative government. In Israel’s democracy, where rule of law is upheld and freedom of expression is assured, Americans see a mirror image of our own.”

Republicans have tried to use the controversy to split Democrats from one of their traditional blocs of support – a recent Gallup poll found that only 16 percent of Jewish Americans identified as Republicans last year.

Trump recently called the Democratic Party “anti-Israel” and “anti-Jewish” after House leaders broadened a resolution responding to Omar by condemning all forms of hatred.

“We are loyal Americans, patriots who believe it is in America’s interest that Israel remains strong and free and supported as a place of refuge from the haters of the world,” Hoyer said, concluding his remarks with another rejection of the “dual loyalty” charge.

“We proudly stand with Israel. Accuse us.”