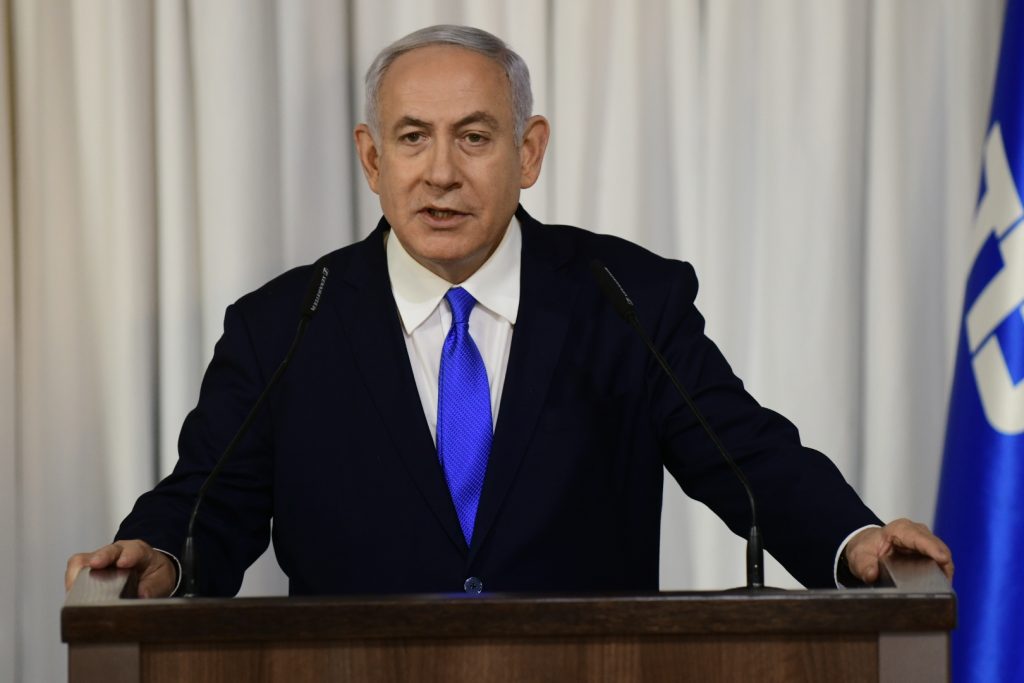 Prime Minister Binyamin Netanyahu left for the United States early Sunday, on his way to the AIPAC Conference and two meetings with President Donald Trump. Netanyahu is set to meet with Trump on Monday, and has been invited to dinner with the president Tuesday night.

“I am leaving for Washington for important meetings with President Trump, and I will also meet with members of Congress and speak at the AIPAC Conference,” Netanyahu said at Ben Gurion Airport before departing. “I will speak with the president about the Golan and about his historic declaration, about Syria, about the continued pressure on Iran, and about sanctions on Iran that have been imposed and will yet be imposed.”

Netanyahu arrived at the airport directly from the studios of Channel 12, where he gave an impromptu interview regarding the sale of stocks in a company that would eventually supply technology to Thyssenkrupp, the German company that sold Israel submarines in a 2014 deal. Blue and White candidates have in recent days played up the possibility of a conflict of interest in that sale, but in the interview Netanyahu dismissed the allegations, accusing the Blue and White candidates of lying, and the media of treating him unfairly.

As expected, the opposition slammed Netanyahu for his comments. In a statement, Blue and White said that Netanyahu is “hysterical and has been changing his story on this matter. We didn’t get any answers on how he made NIS 16 million on this deal. The one thing we can conclude from this interview is that he now realizes he will lose the election.” Former IDF Chief of Staff Gabi Ashkenazi said that even though Netanyahu sold the shares in SeaDrift, the technology company that would eventually merge with another firm that supplied parts to Thyssenkrupp, he was already planning the purchase of the submarines. “He sold the shares after he showed me his plan to buy the submarines,” Ashkenazi said in an interview Sunday. He did not explain how Netanyahu knew in advance that SeaDrift would merge with Graphtec, and that the company would eventually sell parts to Thyssenkrupp.

In the interview, which was punctured by many interruptions and even shouting on the part of interviewer Karen Marciano, Netanyahu said, “We see many high-tech companies that are sold for hundreds or thousands of percent higher than when they started out. This was a company with great technological potential, but was poorly managed.” Netanyahu told his interviewers that it was unfair to blame him for a successful investment. “I say this emphatically – there was no connection between my investment and the submarine purchase. I sold all my shares in that company a year and a half before the first submarine was sold to Israel.”

Netanyahu also slammed the media – and Channel 12 – over the coverage he has received. “There is an attempt here to divert the attention of the public from the fact that we are choosing between a prime minister who has brought the country to its best situation ever, and a leftist government with Yair Lapid as prime minister that will rely on Meretz and Arab parties, who support terror,” Netanyahu said. “We are doing the good work here.

“They make fun of my wife and my son,” he continued. “They show us with the faces of pigs. You do this kind of satire every night. You spill my blood in the news broadcasts. This story of the stocks is another blood libel against me. SeaDrift had no connection to the submarines and I received all the necessary permits to hold and sell the stocks. I am not asking for you as reporters to treat me with kid gloves, as you do my rival party. All I want is to give my answers.”