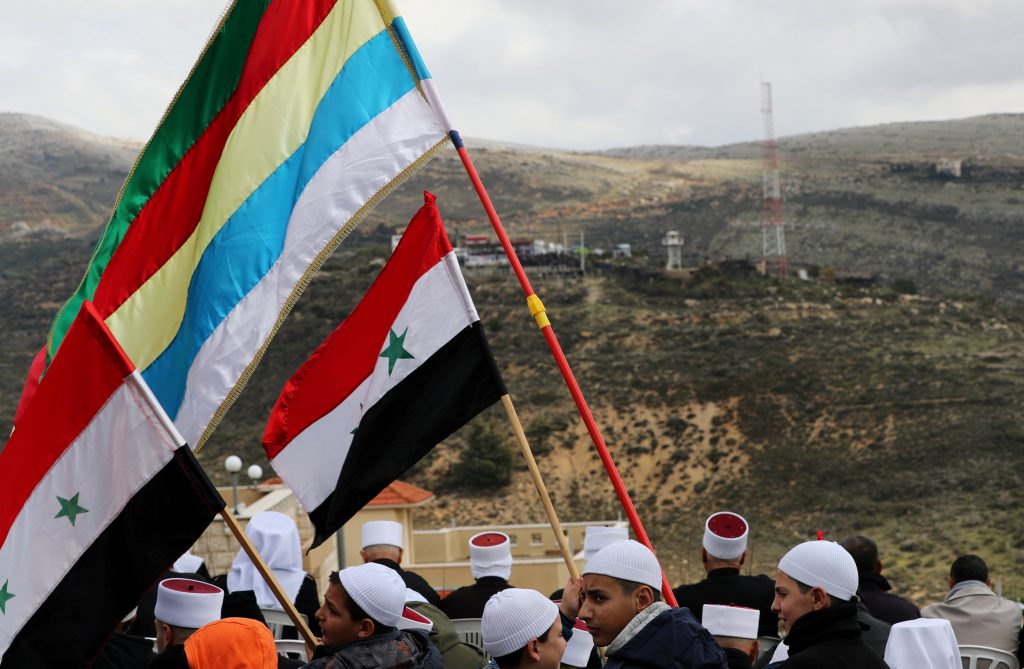 Responding to the declaration by President Donald Trump that the United States would recognize Israeli sovereignty over the Golan Heights, several hundred Druze residents of the northern Golan protested over the weekend, proclaiming that the Golan would “was and will forever remain Syrian.” Speaking to Channel 12 news, one of the protesters said that the Druze “are an integral part of the Syrian nation and we are proud of our army and our President Bashar al-Assad.

“We tell Trump that the Golan is Arab and Syrian, no matter how long the occupation continues,” the protester said. “We send our blessings to President Assad and declare that the Golan will remain Syrian forever.”

Last Thursday, Trump wrote in a social media post that “after 52 years it is time for the United States to fully recognize Israel’s Sovereignty over the Golan Heights, which is of critical strategic and security importance to the State of Israel and Regional Stability.”

U.S. Defense Secretary Mike Pompeo, after meeting with Prime Minister Binyamin Netanyahu, said that “President Trump made the decision to recognize… [the Golan Heights] is proper to be a sovereign part of the State of Israel. The people of Israel should know the battles they fought, the lives that they lost on that very ground, were worthy and meaningful.”

Speaking with reporters after a joint press conference with Pompeo, Netanyahu called the move a “Purim miracle.” In a social media post, Netanyahu wrote, “At a time when Iran seeks to use Syria as a platform to destroy Israel, President Trump boldly recognizes Israeli sovereignty over the Golan Heights. Thank you, President Trump.” The comments came after Pompeo, together with Netanyau and U.S. Ambassador to Israel David Friedman, visited the Old City of Yerushalayim, including the Kosel.

Friedman, in a social media post, thanked Trump “for your moral, courageous and just decision to recognize Israeli sovereignty over the Golan Heights. Once again, under your leadership, the United States stands resolutely with the people of Israel.” Israeli Ambassador to the U.N. Danny Danon said that “we are at the beginning of a historic moment for the State of Israel. President Trumo once again proves the strength of the U.S.-Israel relationship, and that the Golan Heights is an inseparable part of Israel.”

Trump’s comments took Israelis somewhat by surprise, but there had been rumors that official American recognition of Israeli sovereignty over the Golan would come this week.