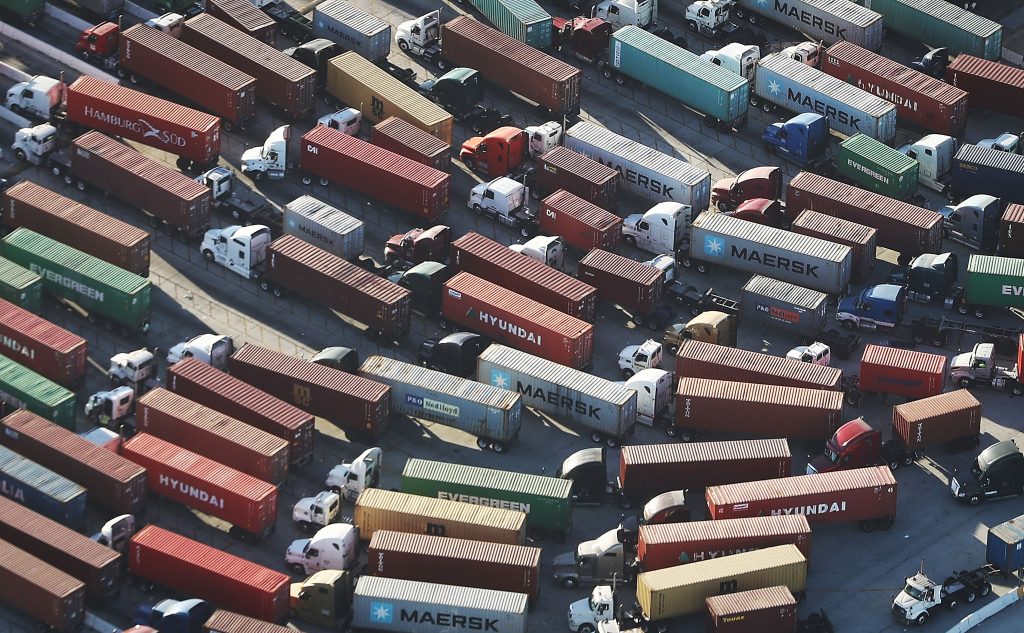 A fierce struggle over automation has erupted at the Port of Los Angeles, as local union officials representing some 12,000 dockworkers demand that one of the world’s largest shipping firms abandon a plan to introduce driverless electric cargo trucks.

Shouting, whistling and jeering, more than 1,200 union members, local business owners and community activists packed a four-hour hearing Thursday before the Los Angeles Board of Harbor Commissioners. The board voted to postpone a construction permit for the automated system after an offer by Mayor Eric Garcetti to mediate the dispute.

“The decision before the board may have far-reaching impacts on the pace of automation at our port and could define how the port will compete and sustain jobs into the foreseeable future,” Garcetti wrote in a letter unveiled at the hearing.

The mayor called for a 28-day delay in deciding on the permit, adding that negotiations “should serve as the basis of a new task force to explore automation and its impacts on the future of the Port of Los Angeles and others across the state.”

Port automation dates to the 1960s, when dockworker unions agreed to the introduction of containers, and consequent job losses, in exchange for higher pay and benefits. Today a typical full-time Southern California longshore worker earns more than $100,000 a year. But thousands of so-called “casuals,” who are not yet registered union members, earn far less, are eligible only for part-time hours, and do not yet get health or retirement benefits.

A 2008 International Longshore and Warehouse Union contract, renewed in 2015, explicitly allowed West Coast ports to continue automating. Two large terminals — one at the Port of Long Beach and one in Los Angeles — have already introduced the driverless vehicles known as UTRs, or utility tractor rigs.

But automation at the 484-acre facility operated for Denmark’s Moller-Maersk by APM Terminals is prompting an uproar from local union members who are having second thoughts about the current contract and believe the permit will lead to automation across all 12 of the port complex’s terminals.

The struggle comes as Los Angeles and Long Beach, the busiest ports in the nation, are enjoying record cargo traffic, despite the threat of an escalating trade war with China. The twin ports handle a third of U.S. container traffic, but they have lost market share to facilities along the Gulf of Mexico and, since the widening of the Panama Canal, along the East Coast.

APM officials decline to say how many jobs will be eliminated if what they call “self-guided container handling equipment” is introduced. Union officials say hundreds are at stake. One in nine jobs in the five-county region is linked to commerce flowing through the port complex, according to port officials.

APM characterizes its proposed automated, battery-powered vehicles, which would replace diesel-fueled rigs, as a response to the port’s clean air rules. But union officials say APM could introduce manned electric vehicles instead.

“This proposal is not about clean air and streamlining business practices,” Mark Mendoza, president of ILWU Local 13 told the five-member commission. “It is about Maersk maximizing their profits at all costs … It will ultimately ensure the economic demise of the Southern California region.”

“Robots do not pay taxes,” Local 13 Vice President Gary Herrera told the hearing, as hundreds in the audience rose to their feet applauding and yelling approval. “Robots do not shop in our communities. Robots do not vote!”

Port staff members have recommended approving APM’s permit request to install infrastructure to support the automated vehicles, along with scaffolding for containers and an upgraded Wi-Fi system. Economic impact is not part of the permit process, which falls under the port’s coastal land-use plan, port officials said.

The permit “is in compliance with the port’s master plan and the California Coastal Act,” said Eugene Seroka, the port’s executive director.

Maersk attorney Peter Jabbour said at the hearing that “there is no legal basis” for the union’s opposition to granting the permit. The company proposes only “minor infrastructure changes to the terminal, with no adverse environmental impacts. Objections to automation are not part of the coastal development process.”

James McKenna, president and chief executive of the Pacific Maritime Assn., which represents 70 port companies, accused Local 13 of making “an end run around the current Pacific Coast Longshore contract, the federally governed collective bargaining process that led to it, as well as the ILWU’s democratic election that resulted in its ratification.”