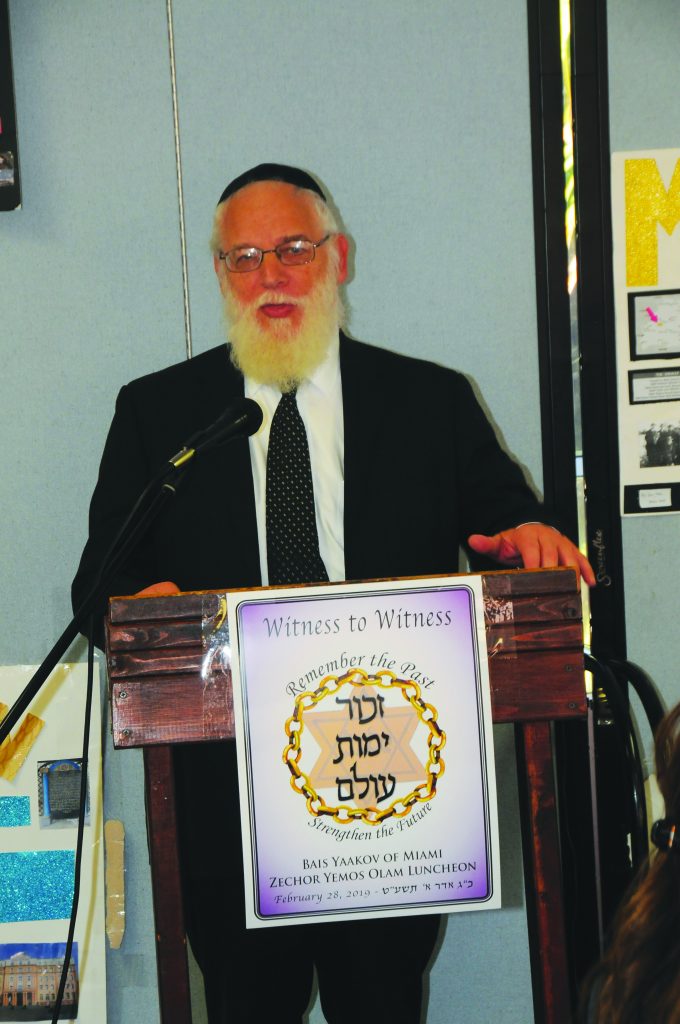 The Zechor Yemos Olam program (also known as the ZYO program) is run by Mrs. Chanie Mandel and serves as a great source of pride for Bais Yaakov Miami. Since its inception a number of years ago, the goal of the ZYO program has been to “Remember the Past, Strengthen the Future” by promoting awareness of Churban Europa in the school and by extension, in the community.

This program imparts a deep understanding of pre-war Europe and the Holocaust, all through the lens of Torah. Through the Witness to Witness project, the senior class had the privilege to interview survivors. These stories were recorded and transcribed. They were then compiled into both an audio/visual presentation and a booklet, which were distributed at the luncheon.

This year’s luncheon was a tremendous success. All the guests, including survivors, family members, Bais Yaakov staff, and students, had time to meet and enjoy a delicious lunch. Welcome remarks were given by Mrs. Chanie Mandel, followed by an introduction by Rabbi Ephraim Leizerson, principal of Bais Yaakov of Miami.

The crowd of close to 150 people then had the opportunity to hear from two of the survivors themselves. Students Naomi Amsellem and Nechama Wulwick introduced Judge Samuel Colman who spoke about the positive outlook he maintained, even throughout the darkest moments of the Holocaust.

Tehila Galbut then introduced her great-grandmother, Mrs. Phyllis Margules, who provided details of her experience, and declared that her mission as sole survivor of her family was to pass the message along to future generations.

Finally, attendees heard an inspiring account from Esther Meth, who told the story of her great-grandmother, who worked in the munitions factory of Auschwitz and contributed to the prisoners’ revolt.

The luncheon concluded with a moving video presentation, a compilation of all the Witness to Witness interviews. Each girl also gave a short message about what she gained from the program and the aspects of the interviews they conducted that impacted them the most strongly.

One of the common themes that the survivors emphasized throughout the video interviews was how they maintained, even through the most difficult times, faith in Hashem. It was through this faith that they had the determination to survive and prevail over their tormentors. Many also said that their greatest joy, and their greatest revenge, are the beautiful families they have built from the ashes.

As Rabbi Leizerson said during his address, in the generation after the war, everyone’s parents were survivors. They thought that was normal. We need to recognize the great strength that these survivors demonstrated, going through their experiences and building families.  We must not take it for granted.