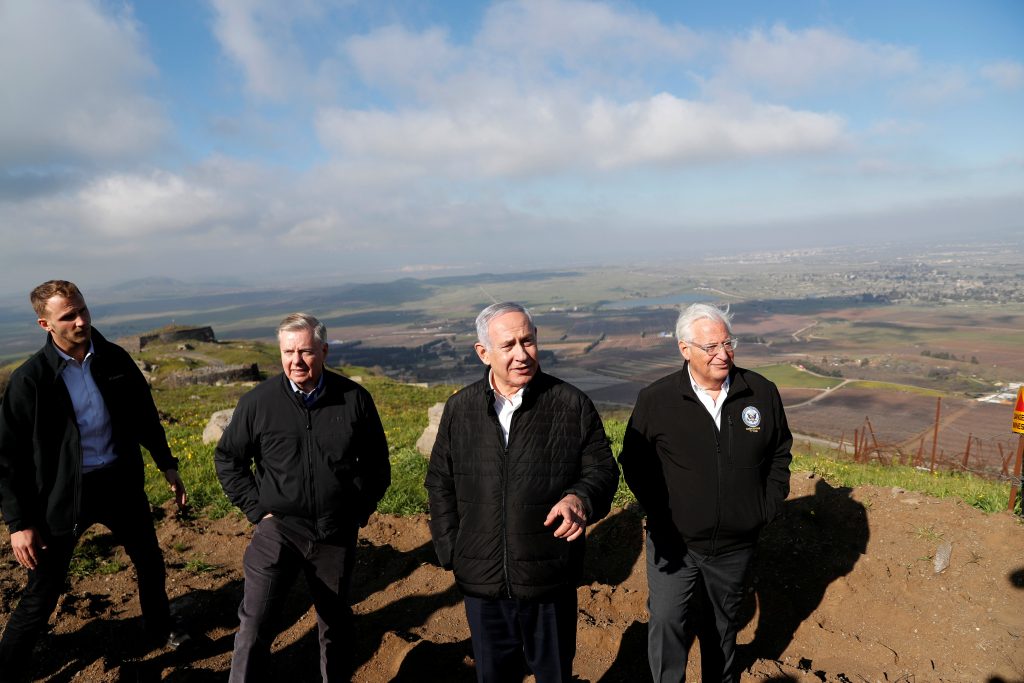 President Donald Trump’s statement that the United States should recognize the Golan Heights as part of Israel was widely welcomed by Israelis on Friday but also triggered criticism that he was interfering in a close election campaign to help Prime Minister Benjamin Netanyahu.

The White House endorsement of Israeli sovereignty over the plateau, which was seized from Syria in 1967, fulfills a request from Netanyahu and came less than three weeks before Israeli voters decide on April 9 whether to reelect their longtime leader for a fifth term.

“It’s clear that Netanyahu has managed to influence Trump to do this for his own electoral benefit,” said Jonathan Rhynhold, a professor in political science at Israel’s Bar-Ilan University. “It is clear intervention in the Israeli electoral process.”

In an interview with Fox Business aired on Friday morning, Trump denied he was trying to help Netanyahu politically. “I wouldn’t even know about that,” Trump said. “I have no idea. I hear he is doing okay.”

The president said he’d been thinking about the move for a “long time.”

But the decision adds to the list of wins that Netanyahu has been touting, including U.S. steps to scrap its participation in the nuclear deal with Iran and the transfer of the U.S. Embassy to Jerusalem which it recognized as Israel’s capital.

The timing is particularly favorable for Netanyahu, as his political opponents have been trumpeting more corruption allegations against him. His main election opponents in the Blue and White Party, headed by former army chief of staff Benny Gantz and Netanyahu’s longtime rival Yair Lapid, have called for an investigation into allegations that the prime minister made $4.3 million in connection with an Israeli submarine contract with a German firm.

The Israeli attorney general has already announced his intention to indict Netanyahu in three other corruption cases, pending a hearing in which the prime minister can offer a defense. Netanyahu has not been named as a suspect in the submarine case, known as Case 3000, but his close aides and personal lawyer have.

Netanyahu has strongly denied any wrongdoing in connection with the four cases and on Friday instructed his lawyers to sue Gantz and Lapid for libel.

“You don’t have to be a conspiracy theorist to speculate that given the extremely intimate level of coordination between Trump and Netanyahu’s teams, the timing is no coincidence,” Israeli journalist Anshel Pfeffer wrote in a front-page article in the Haaretz newspaper entitled “Why Trump dropped his bombshell now.”

An analysis in the Jerusalem Post called Trump’s statement “the election gift Netanyahu dreamed of.”

“All of a sudden the submarines and Blue and White Party allegations that Netanyahu illicitly profited from the deal seem like toy boats in a bathtub,” the newspaper analysis said. “Netanyahu will come to the voter and say, ‘submarines, schmumbarines, I’ve brought you U.S. recognition that we can stay on the Golan.'”

Raviv Drucker of Israeli Channel 13 called Trump’s statement “a clear attempt to help Netanyahu.” Drucker said that Netanyahu’s Likud Party also indicated that more “gifts” are expected from Trump, adding that he will “go out of his way” next week when Netanyahu visits Washington to help him.

The latest polls show the Likud Party and Blue and White Party battling it out for first place in the elections. Israel Hayom newspaper on Friday projected Blue and White would win 30 seats in the 120-seat parliament, compared with 26 for Likud. The ultimate test will be which leader is able to assemble a governing coalition from various parties.

“Small changes can make huge differences,” said Rhynhold, suggesting that Trump’s announcement could make a difference. “If it means one seat goes to him and not the left, it can change the whole coalition-building process.”

He said that Israeli voters are less attuned to the damage that Netanyahu is doing to the relationship with the U.S. Democratic Party by tying himself so closely to Trump. Polls have shown a slide in support for Israel among young liberals in particular and veteran Democrats formed a new group – the Democratic Majority for Israel – earlier this year to counter claims the party is not behind Israel.

“They are anti-Israel,” Trump said before departing for Florida on Friday. “Frankly, I think they are anti-Jewish.”

The United States has been accused of putting its thumb on the scale in previous U.S. elections, including in 1996 by backing Ehud Barak, whose bid for reelection still failed. However, Trump and his policies have resonated with Israelis.

The Golan move was welcomed across Israel’s political spectrum. Lapid, whose Blue and White party had promised to strengthen Israel’s hold on the Golan, called the decision a “dream come true.”

But Israelis are now pondering what the Trump administration may ask from Netanyahu in return, especially since a long-awaited White House peace plan for the Middle East is expected after the elections.

Rhynhold said Trump likely takes the attitude “if I do you a favor, you do me a favor” and the favor expected of Netanyahu would be to back the peace plan. But that plan could involve setting up a Palestinian state with a role for terrorist groups like Hamas.

Israeli politicians have been wary of the price for the Trump administration’s pro-Israel moves. “With all the joy of American recognition of the Golan Heights, it is essential to say: The ‘Golan in exchange for Hamastan’ deal is a danger to Jewish settlements and to Israel,” Rhynhold said.

Just over half of the population on the Golan Heights are Arabic speaking Druze who live alongside Israelis who have settled there since it was captured in the 1967 war. The elevation of the plain makes it highly strategic, with Syria using as a shelling position during the conflict.

Israel’s 1981 annexation of the territory was not recognized by the United Nations or the rest of the international community.

“The Golan Heights are either Israeli or Syria,” tweeted Nikki Haley, the former U.S. ambassador to the U.N.

“America should never support giving an inch of territory to the barbaric war criminal Assad,” she said, referencing Syrian President Bashar Assad. Syria, along with its allies Iran and Russia, has slammed the U.S. move.