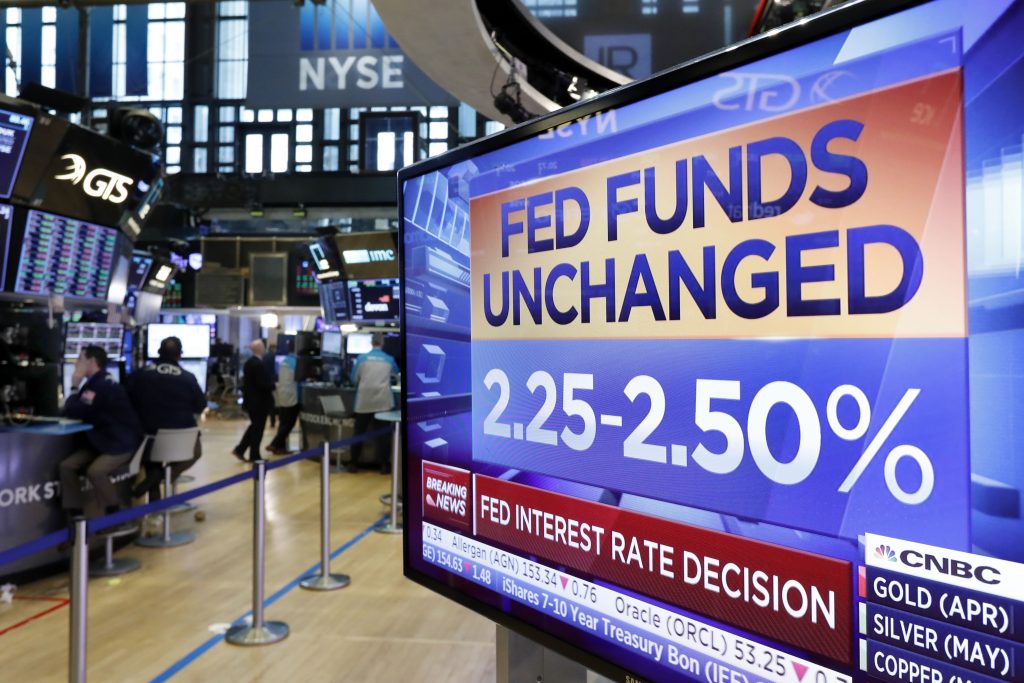 That’s a marked change from three months ago, when the central bank projected two rate hikes this year.

The Fed policymakers, emerging from a two-day meeting, also projected that the U.S. economy would grow more slowly this year and next, a change from the panel’s projections just three months ago. The Fed officials also forecast that the nation’s unemployment rate will rise slightly from this year through 2021.

Bond prices continued to climb after the Fed announcement, sending yields lower. The yield on the 10-year Treasury fell sharply, to 2.53 percent from 2.61 percent late Tuesday.

Financials and health-care companies took the heaviest losses, outweighing gains in communications, energy and other sectors.

Stocks closed on a soft note Tuesday, ending a weeklong rally. The market is still off to a roaring start to the year. The S&P 500 index is up 13.3 percent so far in 2019. That’s better than the full-year gains for the benchmark index in four of the past five years.

Traders also had their eye on developments in the trade talks between the U.S. and China.

President Donald Trump said if negotiations result in a deal, tariffs could stay in place for some time to ensure Beijing “lives by the deal.” Trump added that the White House was discussing keeping tariffs for a “substantial period of time,” adding that China has had “problems living by certain deals.”

Administration officials are set to visit China for more negotiations late next week for another round of negotiations. Trump said the talks are “coming along nicely.”

Wall Street is hoping for a resolution to the damaging trade war between the world’s largest economies, which has made goods more costly for companies and consumers.

The average had been down more than 216 points earlier. The S&P 500 was up 0.2 percent after declining much of the day. The Nasdaq composite rebounded, adding 0.7 percent.

DAMAGED PACKAGES: FedEx fell 4.8 percent after the company told investors that weak economic growth and higher costs will continue to cut into profit and revenue.

The package delivery company’s third-quarter profit fell more than expected as it dealt with slower economic growth and weak global trade. Revenue also fell short of forecasts. Looking ahead, the company cut its full-year profit forecast for a second time.

GAME ON: Google jumped into the video game arena, unveiling is Stadia platform and sinking shares of Sony and Nintendo.

Stadia works by streaming games on existing platforms, such as laptops and phones and can be shared directly to YouTube. It will potentially compete with more traditional console-based video game platforms, like Sony’s PlayStation. Sony’s U.S.-listed stock slid 5.4 percent in relatively heavy trading. Shares in Google parent Alphabet added 0.7 percent.

RISING DOUGH: General Mills blew away profit forecasts for the third quarter as higher prices on some of its products lifted revenue. The stock rose 2.6 percent.

The maker of Cheerios, Lucky Charms and Pillsbury, has been facing tougher competition as consumer tastes continue to shift to healthier food options. The company has been working to build a broader mix of healthier products, along with raising prices on certain brands.

The company now expects adjusted full-year earnings per share to be flat to up 1 percent from last year’s $3.11. Previously it forecast a decline of up to 3 percent.

OIL SPIKES: News of tighter supplies of oil and continued production cuts helped to briefly push the price of benchmark U.S. crude oil above $60 a barrel. It hadn’t closed above that price since November. It fell back slightly in afternoon trading, holding on to a gain of 1.2 percent to $59.53 a barrel.

The rise came after the U.S. government reported that supplies of oil fell 9.6 percent last week and news that OPEC plans on maintaining deep production cuts.