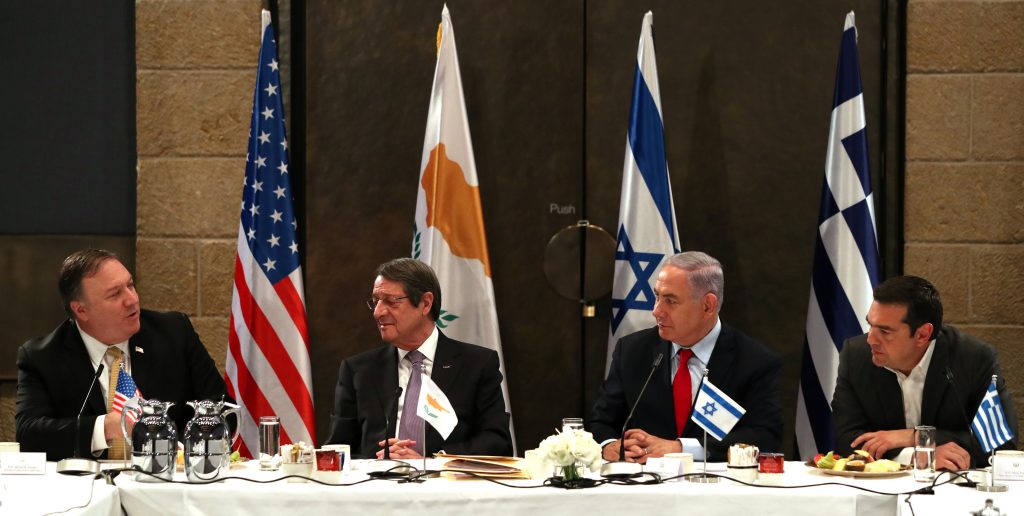 Israeli Prime Minister Binyamin Netanyahu and U.S. Secretary of State Mike Pompeo met in Yerushalayim on Wednesday, proclaiming that the bilateral relationship has never been stronger and that stopping Iran is a shared objective.

With Iran on the agenda, Netanyahu told Pompeo that the “time had come for the United States to recognize Israeli sovereignty over the Golan Heights,” during their meeting.

“Only last week we exposed Hezbollah’s efforts, backed by Iranian funding, to establish a military base in Syria on the border of the Golan Heights,” Netanyahu said. “I think that for this and other reasons, it is time for the U.S. to recognize Israel’s presence in the Golan, which officially belongs to Israel.

“With the threats of annihilation that Iran is making against Israel, we are committed to Israel’s security and its right to self-defense,” Pompeo affirmed, sidestepping the issue of sovereignty over the Golan. “With rocket threats from Gaza and threats from the North, we are proud to stand by your side.”

Pompeo stressed that the purpose of the visit was to advance the effort to build a regional alliance against Iran: “More than 60 countries met in Warsaw and there was a historic conference,” Pompeo said. “Arab leaders and Israel discussed terrorism and how to stop Iran’s campaign of destruction in the region.”

Netanyahu praised the Trump administration for its support of Israel. “Under President Trump, this partnership brought recognition of Jerusalem as the capital of Israel and the transfer of the U.S. embassy to it,” Netanyahu said. “U.S. Ambassador David Friedman does not have to travel through the traffic jams in Tel Aviv, which we are trying to relieve anyway,” he quipped.
Prior to his arrival, Pompeo denied that the visit was intended to give a boost to Netanyahu’s reelection campaign, insisting that regional alliances was the reason for coming. However, the Secretary of State is not expected to meet with Netanyahu’s political rivals during his stay.