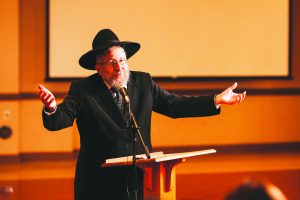 “International Yid” would be a most fitting title for Harav Moshe Goldberg, zt”l, who was niftar in Toronto on Thursday morning, Rosh Chodesh Adar II, at the age of 69. This moniker would not be a result of his travels or of his fame. Rather, it would describe the esteem in which he was held by such a wide cross-section of society, ranging from right to left and all shades in-between.

Rav Moshe was born in Chicago to a typical American Jewish family in 1950. After attending Arie Crown Hebrew Day School, he entered Yeshiva Telshe-Chicago for high school, where his younger brother, Harav Aharon Dovid, later to become Rosh Yeshivah in Telshe, was already making his mark as a superior talmid. Although his parents, Rabbi and Mrs. Yitzchok and Betty Goldberg, might have expected him to attend college, it was soon obvious that Rav Moshe was totally enamored by Torah. During the off hours he completed several masechtos with his brother, and he was well on his way to dedicating his life to the study and promulgation of Torah.

Throughout his metamorphosis as a ben Torah, he never changed the essence of his nature. He remained accessible, friendly, and the same cheerful and normal “American boy” he always had been. Whether shmoozing with his talmidim in Yeshiva Or Chaim, a Bnei Akiva-type yeshivah where he taught each morning, or speaking in learning with his afternoon talmidim in Yeshiva Zichron Shmayahu, he was beloved and respected equally. He managed to touch the lives of nearly everyone in the Toronto community, where his tremendous ahavas haTorah, ahavas Yisrael and ahavas habrios were palpable.

As he met the various residents of Toronto, he invariably greeted them with, “Let me tell you…” On a regular day, he might regale his companion with the latest story of a Gadol, enhancing the tale with the enthusiasm that helped draw the listener in to the world of our great leaders. A yeshivahman might be buttonholed with a chiddush on the sugya he was learning, as Rav Moshe’s love of Torah overflowed during the discussion. During the chagim he would share with others the Torah he had seen about that Yom Tov, relating the shtikel while brimming with excitement.

“My father would need to spend some time each day to horeve in learning,” he son recalled, “without which he couldn’t function during the day. It made no difference if it was Erev Pesach or Erev Rosh Hashanah, his need to horeve was like others need their morning cup of coffee. At times, when I wanted to speak with him, he would excuse himself, saying, ‘I’m sorry, but I’ll call you back soon since right now I’m in middle of horeven in lernen.’

“He would call back several hours later, making sure to give me as much time as I needed, but the lesson of the time in-between was never lost. Most of all, my mother is the one who enabled him to spend this time as he wished, making sure that nothing stood in the way of his precious [learning].”

A talmid of Rav Goldberg from Or Chaim made a novel observation. “Rav Goldberg showed us that ‘Torah is not in Shamayim.’ He showed us the geshmak that he had in Torah, the sweetness he felt in learning, the enjoyment he had in his life through learning Torah.” His talmidim were familiar with the tune he used when learning for hours on end.

One talmid mentioned that when he entered Rav Goldberg’s shiur, his older brother warned him to “stay out of the bruise zone.” It seems that because of his excitement in learning, he would often playfully grab or slap the arm of those talmidim who sat nearby. Yet these very same talmidim grew to adore him as his infectious passion for Torah inspired them to raise their own attachment to Torah.

Eitan, a talmid, came to be menachem avel and told a story that epitomizes the way Rav Goldberg encouraged and motivated his students. “The school had an outing scheduled for one morning, but due to some technical mix up, the trip was canceled. Besides me, no one showed up for class that morning, and I was left to learn with my Rebbi one-on-one. As we were delving into the intricacies of the Rashba together, Rebbi turned to me and exclaimed, ‘Eitan! It was k’dai for you to be born just so we should spend this morning learning this Rashba together!’ And later in the day, I wrote those words into the margin of my Rashba.”

When it came to his caring for another person, Harav Moshe Goldberg was in a league of his own. Each Friday, he had a list of people he called, checking up on them and offering them friendship, encouragement and chizuk. The recipients of these phone calls included widows and others who were down on their luck.

One person called last Wednesday morning, the morning after Rav Goldberg suffered a heart attack, worried that he had not heard from him the previous evening. “Rav Goldberg would always call me twice each day. At 11:00 in the morning, at his break, he called to find out how I was doing, and at 7:30 in the evening he called again to see how my day went. I heard from him Tuesday morning, but when I didn’t hear from him in the evening, I knew something had to be wrong.”

A yungerman made a bris one Sunday morning, and since Rav Goldberg was teaching at that hour, he was unable to attend. On Monday morning he asked the father of the child to please repeat to him the shtikel Torah he had said at the bris. Rav Moshe listened intently, and then asked the father to repeat it once again. That day he called both the mother and mother-in-law of the yungerman and praised the wonderful shtikel Torah their son had said at the bris, thereby giving them an extra bit of nachas in their time of joy.

His chessed extended to his own talmidim as well. In Yeshiva Zichron Shmayahu where he taught in the afternoons, he was aware that many bachurim were in the dormitory, and in order to make their stay more comfortable, he would bring along a bag of cookies or some other nosh each day. On days when he was not in town, he provided money for someone to purchase and distribute the nosh.

Once, someone questioned his practice, claiming that it was below the kavod of a Rebbi to provide refreshments for his talmidim. In his inimitable manner, Rav Goldberg explained why he would continue this practice. “I am not a person of means, so in Shamayim they will never have any complaints why I did not perform great chassadim. But if they come with complaints why I did not do small acts of chessed, I will not have any terutz. Therefore, I feel compelled to perform this small act of chessed for my talmidim.”

The unusual sight at his levayah, where his talmidim at Or Chaim stood sadly in their kippot serugot side by side with his talmidim of Zichron Shmayahu in their black hats, was characteristic of his accepting nature of all Yidden. “He was a man without any agenda,” his son said. “It made no difference how the person dressed; he was color-blind to it all. And that is why he was so beloved by the entire city of Toronto and beyond.”

The reverence in which he was held extended to the gentile neighbor who lived across the street and referred to him as “the holy Rabbi.” As the neighbor told the niftar’s brother, Rabbi Yehudah Goldberg, “My property had a large patch of grass on the side, and a while back I asked the zoning board to grant me permission to sub-divide it and build a second house on the grassy patch. Under normal conditions, I should not have been granted permission to build a second house there, but lo and behold they allowed me to build on the property.

“The only reason that I could offer for this is because the holy Rabbi would learn on his porch, and in back of the grassy patch there was a pool which could disturb his studies. I guess I was permitted to build there because this would separate the pool area from the porch where the holy Rabbi studied.”

As the city of Toronto mourns the loss of Harav Moshe Goldberg, all take comfort in the knowledge that their heilige Rebbi will certainly continue to be an inspiration for them, and will serve as a meilitz yosher for his outstanding family and the rest of Klal Yisrael as well.