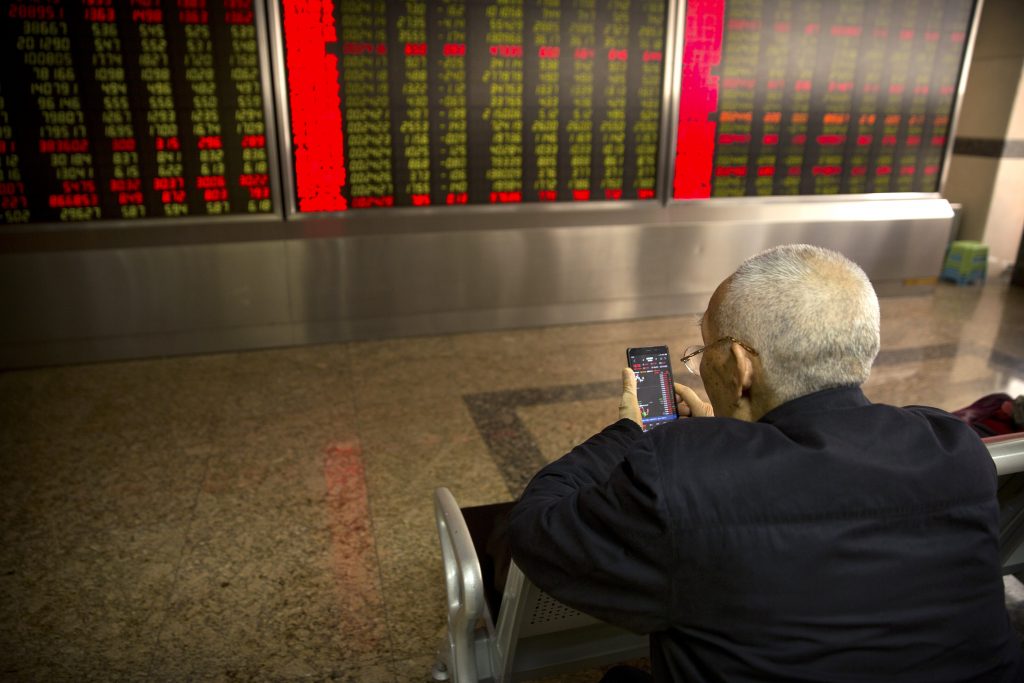 Asian shares slid on Wednesday as investors took profits ahead of a policy decision by the Federal Reserve which is expected to shed more light on its interest rate plans for the rest of the year.

European stocks were expected to open lower, with futures tracking Britain’s FTSE, France’s CAC and Germany’s DAX indexes down between 0.5 percent to 0.7 percent in early trade.

Wall Street shares were narrowly mixed on Tuesday, with the S&P 500 losing 0.01 percent and the Nasdaq adding 0.12 percent.

Some market players said selling was triggered by a report of U.S. concerns that China is pushing back against American demands in trade talks.

Still, on the whole, many market players held on to hopes of a trade deal between Washington and Beijing as officials from both sides remained locked in negotiations.

U.S. Trade Representative Robert Lighthizer and Treasury Secretary Steven Mnuchin plan to travel to China next week for another round of trade talks with Chinese Vice Premier Liu He, a Trump administration official said on Tuesday.

“China is eager to come to an agreement so I’m not too worried. As long as they are holding meetings, many things will work out,” said Wang Shenshen, strategist at Tokai Tokyo Research Center.

Confidence among Asian companies remained near three-year lows in the first quarter as the U.S.-China trade dispute dragged on, pulling down a global economy that is already on a downward path, a Thomson Reuters/INSEAD survey found.

Companies in the survey listed the global trade war as the top business risk, followed by higher interest rates and the slowing Chinese economy.

The Federal Reserve is widely expected to keep rates steady later in the day, putting the main market focus on its policymakers’ rate projections for the next few years.

Since the beginning of year, Fed Chairman Jerome Powell has said the central bank would be patient – interpreted as a code word for holding off on a rate hike – on signs of slowing economic growth in the United States and many parts of the world.

Financial markets have gone even further by pricing in a rate cut this year. Fed funds futures point to about a 30-percent chance of a cut by the end of year.

The Fed is also expected to lay out a plan to stop shrinking its $4 trillion balance sheet, or so-called quantitative tightening. Many policy makers have suggested the Fed is likely to conclude the process and stabilize its bond holdings by the end of this year.

“I think market consensus centers around an end in September but we expect the Fed to end its balance sheet rolloff in June, at around $3.85 trillion yen, based on our calculations on the amount of excess reserves the Fed will need,” said Shuji Shirota, head of macroeconomic strategy at HSBC Securities in Tokyo.

Expectations of a more cautious Fed have dented the U.S. dollar, which has already been under pressure this year after Powell all but signaled a pause to the tightening cycle at the previous meeting.

The Australian dollar dipped 0.1 percent to $0.7080 , as the country’s bond yields extended their breakneck decline to multi-year lows on expectations of a domestic rate cut.

It was not helped by a 6-percent fall in China’s iron ore prices on expectation of higher supply as Vale SA is set to resume work at its largest iron ore mine in Minas Gerais state.

The British pound remained hostage to headlines on Brexit.

Prime Minister Theresa May is expected to ask the European Union to delay Brexit by at least three months after her plan to hold a third vote on her deal was thrown into disarray by a surprise intervention from the speaker of Parliament.

May had earlier warned Parliament that if it did not ratify her deal, she would ask to delay Brexit beyond June 30, a step that Brexit’s advocates fear would endanger the entire divorce.

On the other hand, the EU’s chief negotiator, Michel Barnier, has said an extension would only make sense if it increased the chances of May’s deal being ratified by Britain’s House of Commons.

Oil prices held close to four-month highs on expectations that OPEC would continue production cuts through the end of the year and after data from the American Petroleum Institute (API) showed a surprise draw-down on crude inventories.

U.S. West Texas Intermediate (WTI) futures were pretty much flat at $59.02 per barrel after touching their highest since November at $59.57 on Tuesday.