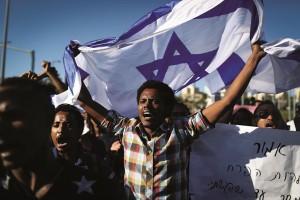 Most of the complaints were resolved quickly, the report says. Among the complaints were several by families of Ethiopian descent that they were asked by their local doctors to inoculate their children against tuberculosis, even though they and their children were born in Israel. Such inoculations are par for the course for new immigrants from Ethiopia and developing countries, but deemed unnecessary for Israelis. After the complaint was filed, the Health Ministry revised its policy to drop the demand. One complaint, over the publicity for an event at Hebrew University involving Ethiopian-descent academics, resulted in the cancellation of the event. In another incident, a moshav in the Negev was accused of preventing Bedouin children from using its swimming pool. The operator of the pool was summoned to a hearing at the Justice Ministry, and promised to allow the children access.

The report’s issuance is part of recommendations made by the Justice Ministry after members of the Ethiopian community protested several years ago over what they said was excessive force used against them by police. The report shows that between 2015 and 2018, police arrested 22.5 percent fewer Ethiopian-descent juveniles, while 50 percent fewer were incarcerated. During that period, incarcerations for juveniles overall was down 29.5 percent, the report shows.