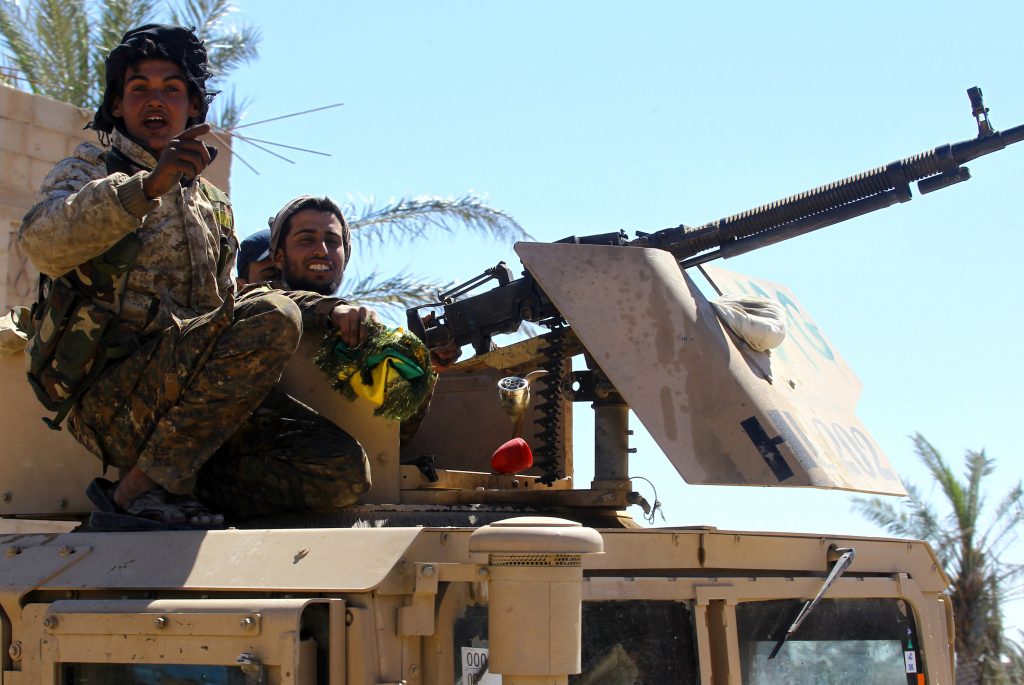 U.S.-backed Syrian forces said they were close to defeating Islamic State in its final scrap of territory at Baghouz in eastern Syria after seizing an encampment from the terrorists on Tuesday, though the battle was not over yet.

Hardened militant fighters holed up in the encampment had been mounting a last-stand defense of the Baghouz enclave, all that is left of Islamic State’s self-proclaimed “caliphate” that once spanned a third of both Syria and Iraq.

“This is not a victory announcement, but a significant progress in the fight against Daesh,” said Mustafa Bali, a media official with the U.S.-backed Syrian Democratic Forces (SDF) on Twitter, using an Arabic acronym for Islamic State.

The SDF captured hundreds of wounded militants when it overran the camp on Tuesday, Bali said. It also captured 157 mostly foreign terrorists.

“The battles are not yet over,” he said. “Some of the terrorists have taken their children as human shields. There are intermittent clashes.”

Islamic State’s terrorists and followers have been steadily forced back to Baghouz after years of retreats in the face of military campaigns by an array of foreign and local forces.

The group’s defeat at Baghouz will mark a milestone in the struggle against the terrorists, although adherents are still widely seen as a big security threat with a presence in remote territory and capable of mounting guerrilla attacks.

The capture of Baghouz will also mark a significant moment in the wider Syrian war, wiping out the foothold of one of the main combatants and leaving Syria partitioned between President Bashar al-Assad, Kurdish-led forces, and Turkey-backed rebels.

Diehard terrorists have been mounting a desperate defense of the camp at Baghouz, deploying suicide bombers and car bombs.

Over the past two months, more than 60,000 people have poured out of the dwindling enclave, nearly half of whom surrendered as Islamic State supporters, including some 5,000 terrorists, according to the SDF.

It has also put out a video from inside the Baghouz camp, showing bearded fighters among bullet-pocked cars and lying on earth ramparts as they fired assault rifles. The scarred landscape around them was littered with vehicles, makeshift shelters and debris, and shaded by clouds of billowing smoke.

Against this scene, a man with a scarf wrapped around his head stood to declaim a message of defiance, a small group of women and toddlers to one side of him.

“The crusaders have forced us from our homes and burned us … O Muslim brothers everywhere, we have done our duty,” he said.

The U.S. military has warned that Islamic State may still count tens of thousands of terrorists, dispersed throughout Iraq and Syria, with enough leaders and resources to present a menacing insurgency.

The Pentagon’s own internal watchdog released a report last month saying Islamic State remained an active insurgent group and was regenerating functions and capabilities more quickly in Iraq than in Syria.

“Absent sustained pressure [counterterrorism], ISIS could likely resurge in Syria within six to 12 months and regain limited territory,” the report said, using another acronym for the group.

U.S. officials said U.S.-backed forces had captured fighters tied to a January suicide bombing at a cafe in Syria that killed four Americans. The attack in the city of Manbij was the worst single incident involving U.S. personnel in Syria since they deployed on the ground there in 2015.

It occurred nearly a month after President Donald Trump confounded his own national security team and allies with a surprise decision to withdraw all 2,000 U.S. troops from Syria, declaring Islamic State had been defeated there.

Flanked by his Iranian counterpart, Syria’s defense minister on Monday renewed the government’s demand for the withdrawal of all foreign armies in Syria without its permission. He also said Damascus would recover SDF-held territories through force unless it agreed to a return of state rule.

The Kurdish-led administration that runs northeastern Syria condemned the government statement on Tuesday, saying it showed Damascus was determined to pursue a policy of “oppression and violence.”