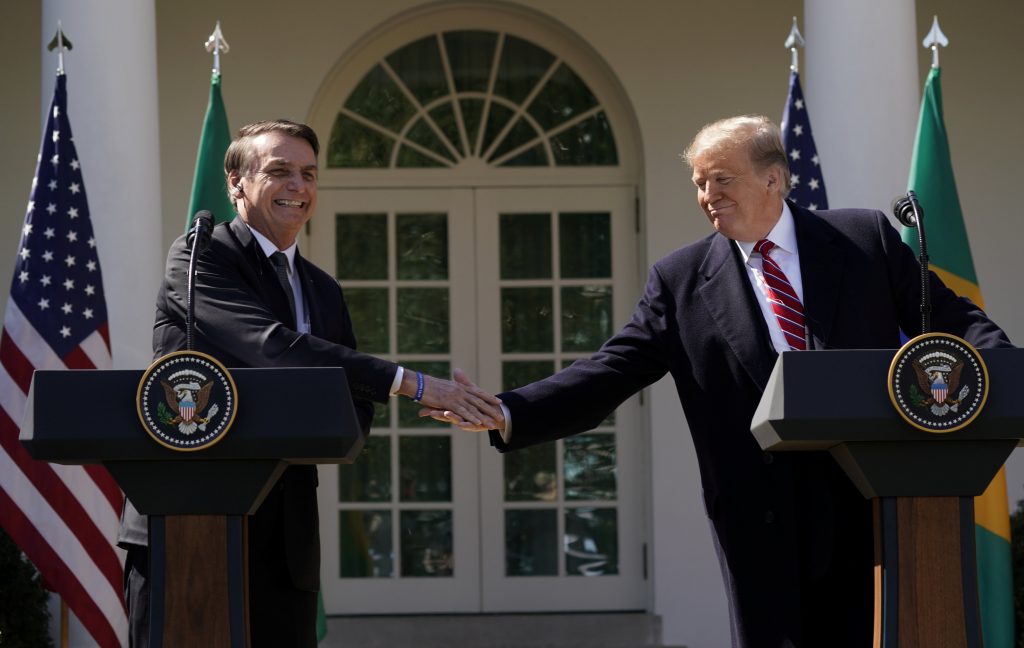 President Donald Trump praised Brazil’s new right-wing leader Tuesday as he welcomed him to the White House, saying the man who’s been described as the “Trump of the Tropics” has done “a very outstanding job.”

Trump said President Jair Bolsonaro had run “one of the incredible campaigns,” saying he was “honored” it had drawn comparisons with his own 2016 victory. And he predicted the two would have a “fantastic working relationship,” telling reporters as he opened a joint press conference that they have “many views” in common.

The two leaders were expected to discuss a range of issues during their first sit-down, including expanding trade relations, increasing U.S. private-sector investment in Brazil and resolving the ongoing political crisis in Venezuela. Both are fierce critics of Venezuela’s socialist President Nicolas Maduro.

As they sat down for talks, President Trump also said that he supports Brazil’s effort’s to join the Organization for Economic Co-operation and Development and is “very strongly” looking at U.S. support for Brazil’s effort to gain certain NATO privileges.

“We’re very inclined to do that,” Trump told reporters, describing the relationship between the two countries as better than ever.

“I think there was a lot of hostility with other presidents. There’s zero hostility with me. And we’re going to look at that very, very strongly, whether it’s NATO or it’s something having to do with alliance,” he said.

Brazil, the largest and most populous nation in Latin America, has pursued becoming a “major non-member ally” to NATO to make buying U.S. weapons easier and to lower barriers to military and other cooperation with the U.S.

President Trump later told reporters he intends to work to designate Brazil a “major non-NATO ally” and “maybe a NATO ally” as well.

Days after taking office Jan. 1, Bolsonaro, a former army captain, said Brazil would consider letting the U.S. have a military base in the country as a way to counter Russian influence in the region, particularly related to Brazil’s neighbor Venezuela.

That statement was roundly criticized, including by former military members of his government, and the administration backed off. Still, Bolsonaro routinely expresses his admiration for Trump and frequently says closer U.S. ties are key to Brazil’s future.

“I admire President Donald Trump and we will certainly work toward” shared interests,” Bolsonaro said Tuesday, adding that just as Trump “wants to have a great America,” he wants to have “a great Brazil.”

In a sign of friendship, the two also exchanged soccer jerseys.

President Bolsonaro has sought to underscore his pro-America stance throughout his visit.

“For the first time in a while, a pro-America Brazilian president arrives in DC,” he tweeted after arriving. “It’s the beginning of a partnership focused on liberty and prosperity, something that all of us Brazilians have long wished for.”

Bolsonaro continued that message in remarks to the U.S. Chamber of Commerce Monday.

“Nowadays, you have a president who is a friend of the United States who admires this beautiful country,” he said.

The Brazilian president, who arrived in the country with a half-dozen ministers, also made an unusual visit to CIA headquarters in Langley, Virginia, on Monday.

Bolsonaro’s son, Eduardo, a Brazilian lawmaker accompanying him on his first bilateral overseas trip, described the CIA as “one of the most respected intelligence agencies in the world” in a tweet that was likely to raise eyebrows back home in Brazil, where the U.S. and its spy services have been regarded with suspicion in recent years.

Bolsonaro succeeded a leftist who at times had a frosty relationship with the United States. In 2013, leaks from Edward Snowden revealed that the National Security Agency had wiretapped conversations of former President Dilma Rousseff, leading to several years of tense relations between the U.S. and Brazil.

His insurgent, social media-powered campaign has been likened to Trump’s 2016 effort. Like Trump, he painted himself as representing “the people” standing up against “the elite,” blasted unflattering stories as “fake news,” and mimicked Trump’s “America First” catch phrase, pledging to put “Brazil First.”

In an interview on Fox Monday, Bolsonaro said he supported Trump’s hardline immigration policies and his efforts to build a wall along the U.S.-Mexico border.

“The majority of potential immigrants do not have good intentions or do not intend to do the best or do good for the American people,” said Bolsonaro, adding that he hoped the U.S. would uphold its current immigration policies.

The remarks were aired after the two countries signed several bilateral agreements, including one that allows the United States to use Brazil’s Alcantara Aerospace Launch Base for its satellites, and Brazil announced an end to visa requirements for U.S. tourists who visit the country.

Brazil is seeking U.S. help with its efforts to join the Organisation for Economic Cooperation and Development and to expand trade. The Bolsonaro administration is seeking to reduce public-sector spending and privatize state enterprises to reduce debt and grow its economy.

Venezuela is expected to be a subject of discussion. Brazil, like the U.S., has recognized the leader of the National Assembly, Juan Guaido, as Venezuela’s interim president under the argument that Maduro’s re-election last year was illegitimate.