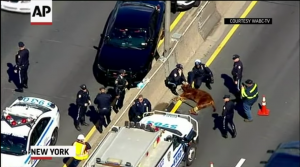 A runaway calf got loose in the Bronx, snarling traffic on the Major Deegan Expressway before being corralled and hogtied by dozens of police officers.

The 8-month-old calf was first spotted at around 11:30 a.m. Tuesday heading toward the George Washington Bridge.

It wasn’t clear where the bovine came from, but there is a happy ending.

The calf, now named Major Deegan, is being put to pasture at the Skylands Animal Sanctuary & Rescue in Wantage, New Jersey.

Skylands founder Mike Stura told Pix11 it’s “as good as it gets.”