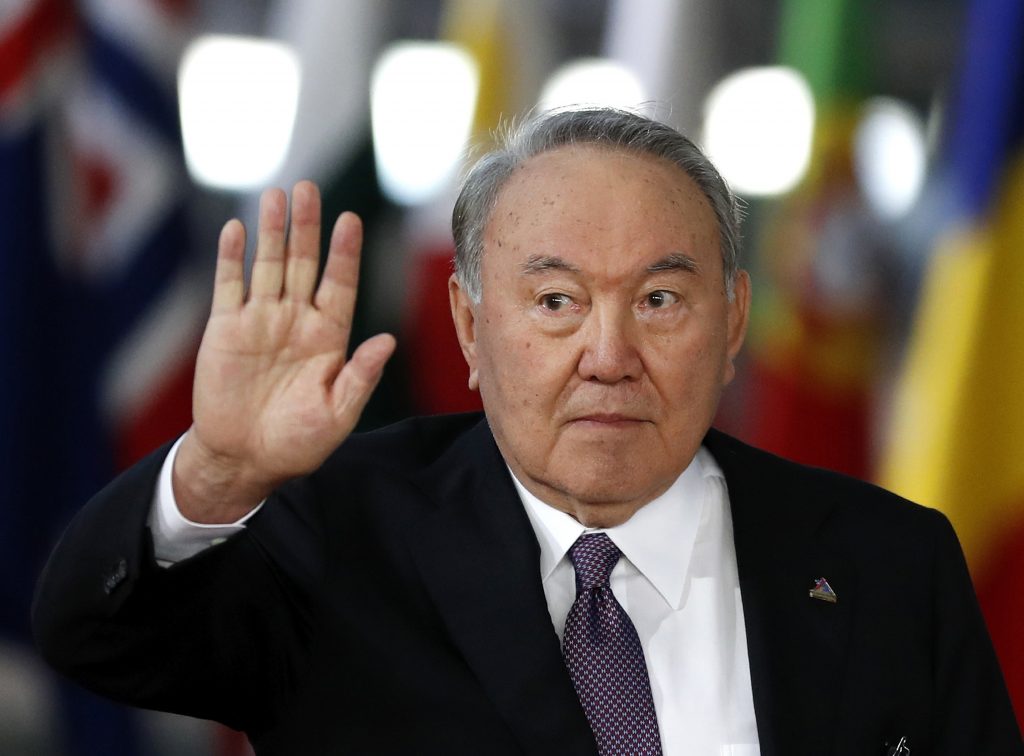 President Nursultan Nazarbayev, the only leader that independent Kazakhstan has ever known, abruptly announced his resignation Tuesday after three decades in power, raising uncertainty over the future course of the Central Asian country.

In a televised address to the oil-rich nation, the 78-year-old Nazarbayev said he has made the “difficult” decision to terminate his authority as president, effective Wednesday.

He did not give a specific reason for the surprise move, but noted that he would have marked 30 years on the job later this year and added that he sees his mission as securing a smooth transition of power.

“As the founder of the independent state of Kazakhstan, I see my future task in ensuring the ascent to power of a new generation of leaders, who will continue reforms,” he said.

Nazarbayev will retain the honorary title of “Elbasy” or “Leader of the Nation” and continue to wield considerable political power. He said he will remain chairman of the nation’s Security Council and the head of the ruling Nur Otan party.

“I will stay with you, as a citizen, a man who loves our country,” he said. “I will serve you until the end of my days. ”

He said that upper house speaker Kassym-Jomart Tokayev will serve as interim head of state in line with the constitution until a new election can be held. Tokayev is a former prime minister and foreign minister who also served as director-general of the U.N. office in Geneva between 2011 and 2013.

Kazakhstan, despite having a population of only about 18 million, is the ninth-largest country in the world with an area of about 2.7 million square kilometers (1 million square miles). It borders Russia to the north and China to the east and has extensive oil reserves that make it strategically and economically important.

Nazarbayev took the helm in Kazakhstan as its Communist Party chief of the republic in 1989 when it was part of the Soviet Union, and he was first elected its president weeks before the 1991 Soviet collapse gave the country its independence.

In those days, Kazakhstan was a backwater region best known for prisons, nuclear testing sites and being the home of the launch facility of the Soviet space program, the Baikonur Cosmodrome.

Nazarbayev has been widely praised for maintaining stability and ethnic peace in Kazakhstan but he also has faced criticism for marginalizing the political opposition and creating what is effectively a one-party state.

He has maintained a delicate balance between Russia and the West, leading Kazakhstan to join a Russia-dominated economic alliance of ex-Soviet nations, but cultivating close energy ties and other links with the West.

He was lauded abroad for modernizing the oil industry and his decision to give up the nuclear weapons that Kazakhstan had inherited from the Soviet Union.

In 1997, Nazarbayev moved the country’s capital from Almaty to the remote northern city of Astana in what was widely considered a way to fuse the ethnic-Russian minority in the north to the new Kazakh state. The new city was filled with post-modern architecture including the soaring glass pyramid of the Palace of Peace and Accord, dedicated to harmony among religious and ethnic groups.

In 2010, Nazarbayev was awarded the title of “Leader of the Nation,” which comes with lifelong immunity from prosecution and as-yet untested powers of veto over some government policies.

He departs at a time of rare open protest against the government.

He fired his prime minister and cabinet last month following a wave of protests by Kazakh women calling for more financial support for children and safer housing after a fire in which five children died. Soon after, he announced a program of more generous spending for large families.

Nazarbayev has extended his tenure by landslide victories in successive elections and plebiscites. He took nearly 98 percent of the vote in the most recent election, in 2015, when elected for another five-year term.

Nazarbayev’s resignation will set the stage for a potential battle between Russia and the United States for influence with the successor government.

Kremlin spokesman Dmitry Peskov said that Russian President Vladimir Putin had spoken with Nazarbayev by telephone earlier Tuesday but didn’t say what they had discussed. He wouldn’t say if the Kazakh leader had given Putin advance warning of his move.

Konstantin Kosachev, the head of the foreign affairs committee in the upper house of the Russian parliament, said Nazarbayev will retain clout in Kazakhstan and “there will be no radical changes in foreign or home policies.”

Nazarbayev was born into a poor rural laborer’s family on July 6, 1940. As a young adult, he worked in harsh conditions at a steel plant’s blast furnace and at age 22 he joined the Communist Party. He worked his way up in the party, went to university and became known for his comparatively candid assessments of the Soviet Union’s shortcomings.

That turn of mind positioned him in the reformist camp that came to ascendancy when Mikhail Gorbachev became leader of the Soviet Union in 1985.

Nazarbayev supported Russian President Boris Yeltsin during the failed coup attempt against Gorbachev by Communist hardliners. Nazarbayev opposed the breakup of the Soviet Union, but was forced to take Kazakhstan out of the union as it collapsed in December 1991.

Just as Yeltsin resigned as Russian president on Dec. 31, 1999, to make way for Putin, so Nazarbayev’s resignation statement came two days before Kazakhstan celebrates the Nauryz holiday, a traditional New Year celebration at the spring equinox.

Nazarbayev was the last of Central Asia’s former Communist Party bosses to remain in power after the deaths of Turkmenistan’s Saparmurat Niyazov in 2006 and Uzbekistan’s Islam Karimov in 2016. The president of Tajikistan, Emomali Rahmon, is now the region’s longest-serving head of state, having assumed power in 1992 during a civil war.