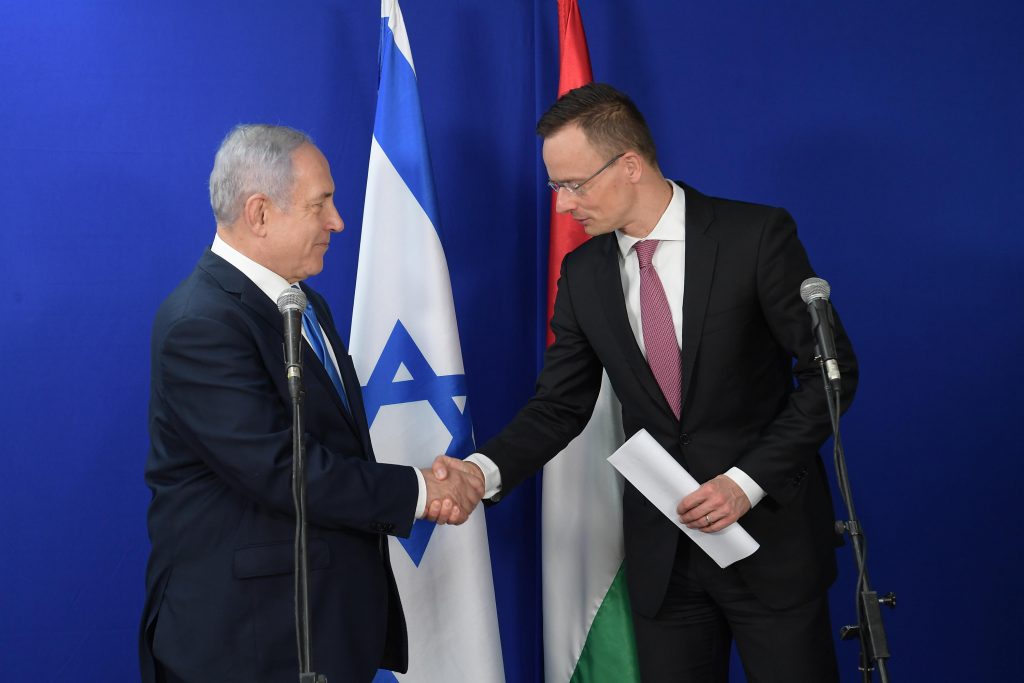 Hungary opened a promised trade office in Yerushalayim on Tuesday, and Lithuania’s prime minister said he would consider moving the country’s embassy to Yerushalayim if he’s elected president.

The Hungarian office becomes the first diplomatic mission in the capital that is an official branch of an embassy of a European country.

“Three diplomats from Hungary will be here. This is a step that Hungary is advancing to change the approach toward Jerusalem,” Prime Minister Binyamin Netanyahu declared at the opening ceremony.

Some 200 Israeli companies are active in Hungary, according to Hungary’s Foreign Ministry. In 2018, bilateral trade passed $525 million dollars.

Netanyahu and Hungarian Foreign Minister Peter Szijjarto participated in the dedication ceremony. They toured the facility, cut the ribbon at the entrance and jointly unveiled the plaque.

The Hungarian diplomatic trade mission will be a branch of the Hungarian Embassy in Israel as Hungarian Prime Minister Viktor Orban promised last month.

Netanyahu noted of the bilateral relationship: “I want to extend special thanks for two things that the government of Hungary is doing. One, the battle against the falsehoods and slanders leveled at Israel in international forums. You’ve been superb, and I want to congratulate and salute you for it. The second is your stance against anti-Semitism which has been robust and important and consistent. I want to encourage you to continue this with the adoption of the IHRA definition of anti-Semitism.”

“Let’s continue this, because this is a path of real friendship. So welcome friend.”

“We have always fought for a fair and balanced approach on behalf of the international community towards Israel. I have to underline here once again that we reject to combine restrictive economic and commercial measures with political issues.

“We will not apply the decision of the European Commission on labeling. We do not support the list of companies in the settlements to be announced by the high representative of Human Rights of the United Nations and we urge for a tighter, better and more dynamic cooperation between Israel and the European Union,” Szijjarto said.

Also on Tuesday, Lithuania’s center-right Prime Minister Saulius Skvernelis said he will consider moving the country’s embassy from Tel Aviv to Yerushalayim, in the event he is elected president in the May elections, AFP reported.

Skvernelis says he hopes that the move would promote stronger ties with Israel and the United States, whose friendship is important to Lithuania’s security against threats from Russia.