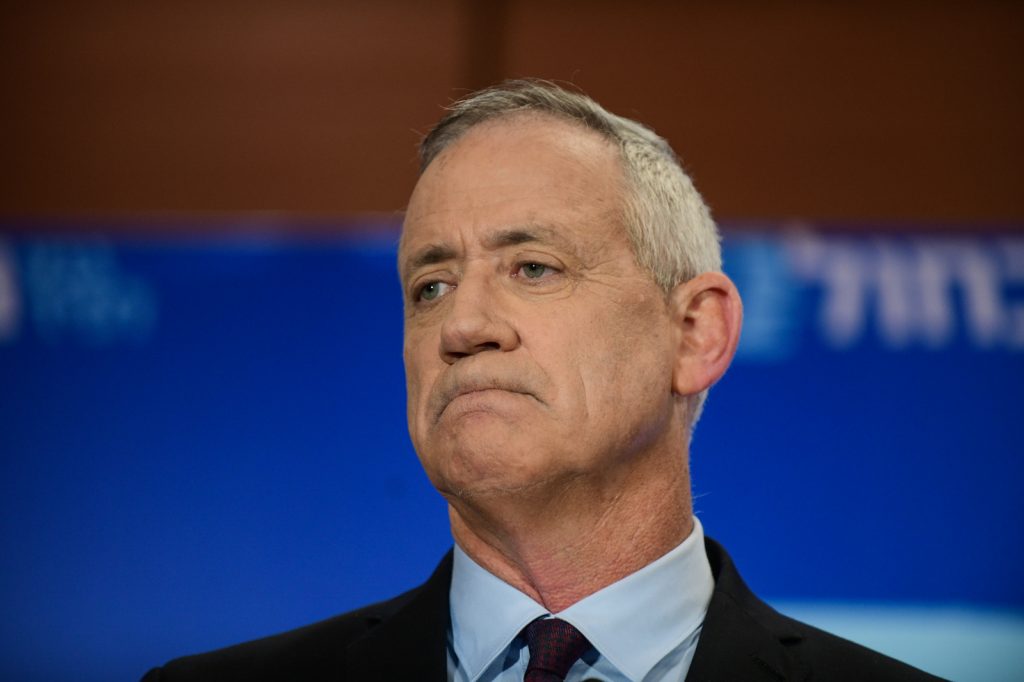 The exchange of accusations between Israeli Prime Minister Binyamin Netanyahu and Blue and White chairman Benny Gantz conducted in recent days could lead to a face-to-face debate.

Gantz declared on Tuesday that he’s willing to hold “any debate” with PM Netanyahu “at any place,” in an interview with Channel 12 news.

The statement came amid another round of verbal sparring between the two.

Netanyahu denied on Tuesday Gantz’s allegation that he profited illegally on purchases of submarines from Germany, calling it “contrived slander.”

“I didn’t get a shekel from the submarine deal,” the premier told leaders in a visit to the Shiloh outpost.

“This was checked extensively by the prosecution and the attorney general,” PM Netanyahu asserted. “They stated unequivocally that I am not suspected of anything.”

The prime minister added that Gantz’s accusations were motivated by “panic” that his Blue and White party has lost momentum in the polls.

On Monday, Blue and White’s leaders accused Netanyahu of being implicated in “the greatest security-related corruption case in the history of the State of Israel.” Gantz pledged that if he wins the election, there will be a parliamentary commission of inquiry into Netanyahu’s involvement in the sub deal.

Netanyahu also warned on Tuesday that a Blue and White victory would be disastrous for the residents of Yehudah and Shomron. He claimed that if elected, Gantz would uproot 80,000-90,000 people from the region to gain illusory diplomatic goals.

“I fear there is a real danger here,” Netanyahu said at Shiloh together with former Arkansas governor Mike Huckabee and Yesha Council head Hananel Dorani.

“[MK Yair] Lapid and Gantz are hostage to the idea that the only way to ensure the nation’s future is to [reduce its territory] by uprooting 80,000-90,000 Jews,” Netanyahu charged.

“They want us to bow our heads and hope the Arabs grant us recognition,” PM Netanyahu said.

Meanwhile, Gantz was circumspect on the subject of peace with the Palestinians. In an interview with Channel 13, he wouldn’t endorse a two-state solution and says there’s “no one to speak to” on the Palestinian side.

“I am not ashamed to use the word ‘peace’; it’s something we should aspire to,” Gantz said. “It’s far away. Unfortunately, there is no one to speak to.”

“What happens on the other side is a matter of negotiations and we’ll deal with it when we get there.” In previous statements, Gantz has indicated that he would be willing to concede territory, even unilaterally, but that Israel should keep the Jewish population blocs in Yehudah and Shomron.

The former IDF chief tried to extricate himself from a contradiction about whether he would sit with Netanyahu in a coalition.

A recording had emerged in which Gantz said he would join with Netanyahu, contradicting his earlier statements that he would not.

What changed between the statements is, he said, Netanyahu. The “Binyamin Netanyahu I see now is not the Binyamin Netanyahu I knew.” That earlier PM Netanyahu was someone he could have gone into a coalition with. He asserted that the premier has lost his way since the two worked together when he was an army chief in 2011-2015.

“The remarks in the recording were made before the full details of the grave indictment charges against Netanyahu were revealed, and definitely before it turned out he received NIS 16 million in a round-trip trade on the submarines and lied to the public on serious security matters.”

However, according to The Times of Israel, the Gantz recording was made after the attorney general published his charge sheet against Netanyahu.

Still, Gantz insisted: “I am saying, not in an anonymous recording but openly and in my voice: I won’t sit with Netanyahu in the government!” he said on Tuesday.

“The only thing that can change the situation is that he comes out differently from the hearing,” Gantz says, referring to a hearing process Netanyahu will undergo on his likely indictment on corruption charges. “Sadly, I don’t see that happening,” he said.

Gantz fended off concerns that have been amplified by the Likud over the hacking of his phone by Iranian agents, insinuating that if he can’t keep his phone secure, he can’t take charge of national security either.

“This telephone issue is so marginal,” he said, adding that he would not consider quitting the campaign because of it.

“I can’t be influenced because of it,” he said. “There’s nothing there to interfere with my performance as a public servant. If people are seeking that I’ll quit, they are mistaken. I plan to serve the State of Israel,” he added.

He said the information on the phone was of a personal nature, but would not go into details.

“The Shin Bet told me six months ago that there was a certain problem; I dealt with it,” he said.

Gantz would not discuss who was behind the hack, neither confirming nor denying that it was indeed Iran, while accusing unnamed political rivals of using “low” tactics in leaking the story to the press.

When asked if he is worried about his party’s drop in the polls, as Netanyahu tauntingly suggested, Gantz told Ynet: “The pendulum will continue until the election, and we’ll reach 40 seats [ in the Knesset].” A poll on Tuesday showed Blue and White down to 28 from a high of 36.