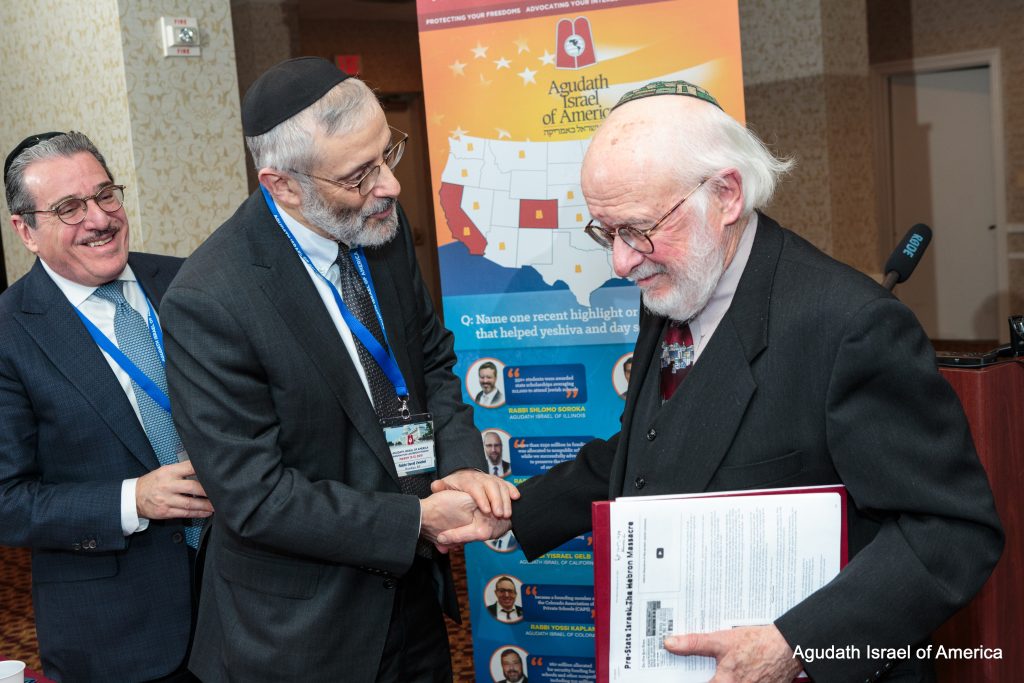 A federal appeals court unanimously ruled to uphold a long-standing tax exemption for funds that go towards housing for clergy members.

The decision, which overturns a lower court opinion that found the law unconstitutional, was welcomed by Orthodox groups along with a broad base of other religious organizations who had argued that the exemption relieves a major financial burden from clergy and faith institutions charged with paying their salaries.

Noted attorney Nathan Lewin, who authored a brief on the case on behalf of the National Jewish Commission on Law and Public Affairs (COLPA), said that a different outcome could have put serious strain on many congregations.

“If we would have lost this case I think it would have had very significant effects on the ability of shuls to pay Rabbis and the meet their budgets,” he told Hamodia. “Shuls are dependent on parsonage as a way to supplement their rabbi’s salaries and if this would have been found unconstitutional it would have cost them a great deal more.”

The case dates back to 2013 when the Wisconsin-based Freedom from Religion Foundation (FFRF) sued the Department of the Treasury, claiming the exemption unconstitutionally favored religious groups and was unavailable to secular ones. The organization, which promotes a policy that encourages the total removal of religion from the public sphere, has a long history of legal struggles against laws and policies that are seen as helpful to religious groups.

FFRF’s challenge was upheld by Wisconsin District Court Judge Barbara Crabb, who ruled that the exemption was unconstitutional, as it provided “a benefit to religious persons and no one else, even though doing so is not necessary to alleviate a special burden on religious exercise.”

Yet in a ruling released last Friday, a three-judge panel of the Seventh Circuit Court of Appeals overturned the decision.

“We conclude [the exemption] has a secular legislative purpose, its principal eﬀect is neither to endorse nor to inhibit religion, and it does not cause excessive government entanglement,” they wrote.

Becket, a law firm promoting religious liberty interests, acting as an intervener in the case on behalf of a group of Chicago churches, said the ruling upholds fair treatment of religious organizations.

Given the heavy financial impact that a ruling for FFRF could have had on houses of worship, multiple religious groups and advocates have filed briefs in support of the government’s position to uphold the exemption.

The Alliance Defending Freedom submitted a filing on behalf of 8,899 ministers and churches, arguing to uphold the allowance.

COLPA’s filing was joined by Agudath Israel of America, The Agudas Harabbonim of the United States and Canada, the Rabbinical Council of America, the National Council of Young Israel, and Torah Umesorah. The brief outlined the halachic considerations that make it necessary for Rabbis to live near their shuls, chiefly due to Shabbos observance and a daily need to be present at tefillos and shiurim.

Rabbi Chaim Dovid Zwiebel, executive vice president, commented that FFRF’s very name bespeaks their motivation in pursuing the case and said that “happily, the Court of Appeals was of a different mind.”

The Orthodox Union had joined a brief on behalf of several Christian organizations, focusing on the scale of the impact that striking the exemption would have on religious institutions, as well as its longstanding status in the tax code.

The OU’s President Moishe Bane commended the court’s ruling and said that the exemption merely recognizes the unique nature of the clergy profession.

“Clergy of all faiths are often ‘on-call’ around the clock to serve their congregants,” he said. “They should not be penalized for doing so; nor should they be required to treat housing allowances provided by their congregations as disposable income.”

FFRF’s Co-President, Annie Laurie Gaylor, who was one of the plaintiffs, criticized the court’s decision, saying the exemption “is so clearly a handout to churches and clergy, and it so clearly shows preferential treatment and discriminating in favor of ministers.”

Over the decades, courts weighing questions of church and state separation have relied on the three-pronged test set out in the 1971 decision, Lemon v. Kurtzman, that laws must serve a secular purpose, neither advance nor impede religion, and not involve “excessive entanglement with religion.”

In more recent years, the Supreme Court has shifted to determining such cases by viewing laws in historical context and moved away from Lemon, a move largely cheered by advocates of faith groups, as it has opened greater access to funding and taken a more liberal approach to the permissibility of religious expressions in the public forum.

In the present case, the appeals court found that the parsonage tax exemption was permissible according to both standards.

Mr. Lewin said that in addition to the practical value of protecting the parsonage exemption, the fact that judges felt it passed muster under Lemon is an important precedent that could have broader ramifications.

“The Lemon test is very flexible,” he said. “In the past it has mostly been used to strike down provisions that help religious individuals or organizations, but this court used the very same test to uphold one of those provisions, which is a trend we hope will continue.”