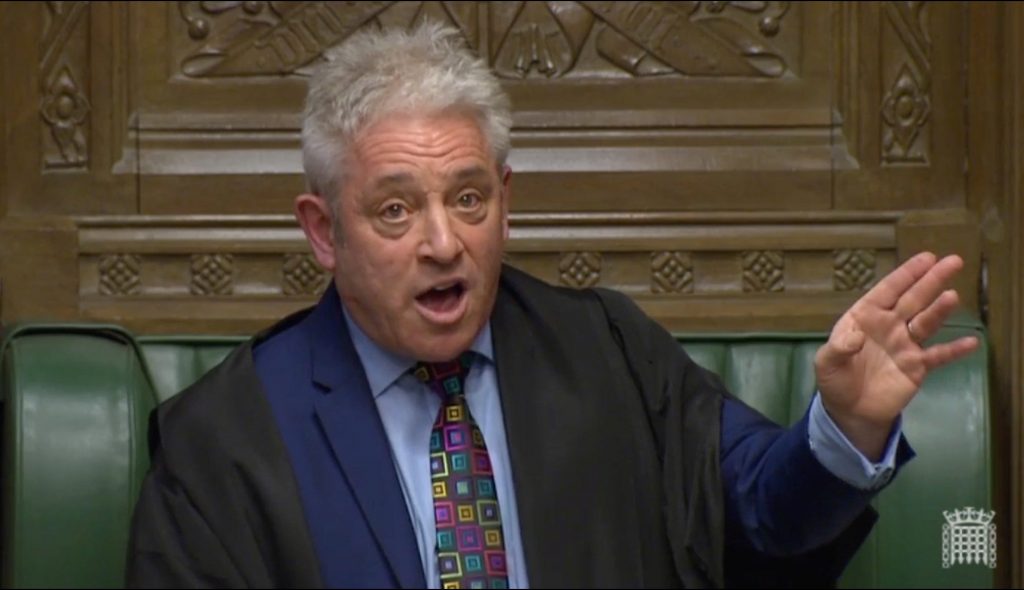 Prime Minister Theresa May’s Brexit plans were in disarray on Tuesday as her government sought to plot a way around the Speaker of Parliament’s ruling that she had to change her twice-defeated divorce deal to put it to a third vote.

After two and a half years of negotiations with the EU, Brexit remains uncertain – with options including a long postponement, exiting with May’s deal, a economically disruptive exit without a deal, or even another EU membership referendum.

Speaker John Bercow blindsided May’s office on Monday by ruling the government could not put the same Brexit deal to another vote in Parliament unless it was substantially different from the ones defeated on Jan. 15 and March 12.

Brexit Secretary Steve Barclay said the ruling meant a vote this week on May’s deal was more unlikely but said ministers were studying a way out of the impasse and indicated the government still planned a third vote on May’s deal.

“This is a moment of crisis for our country,” Barclay said. “The ruling from the speaker has raised the bar and I think that makes it more unlikely the vote will be this week.”

“We always said that in terms of bringing a vote back for a third time we would need to see a shift from parliamentarians in terms of the support – I think that still is the case.”

May is due at an EU summit in Brussels on Thursday at which she will ask for a delay to Brexit as the British government tries to come up with a way to leave the European Union after 46 years of membership.

EU leaders could hold off making a final decision at that summit on any Brexit delay depending on what exactly May asks them for, senior diplomats in the bloc said.

“Now it looks like we have to wait till the week after the Council to find out what happens,” said one diplomat.

Bercow said his ruling, based on a convention dating back to 1604, should not be considered his last word and the government could bring forward a new proposition that was not the same as those already voted upon.

Barclay, who last week said Britain should be unafraid of a no-deal exit, indicated the government was looking at different options and that circumstances, such as an extension or a shift in support, would indicate a change in context.

“The speaker himself has pointed to possible solutions, he himself has said in earlier rulings we should not be bound by precedent,” Barclay said. “You can have the same motion but where the circumstances have changed.

He ruled out May asking Queen Elizabeth to cut short the entire parliamentary session, known as prorogation, saying that involving the 92-year-old monarch in Brexit was a bad idea.

“The one thing everyone would agree on is that involving Her Majesty in any of the issues around Brexit is not the way forward, so I don’t see that a realistic option,” he said.