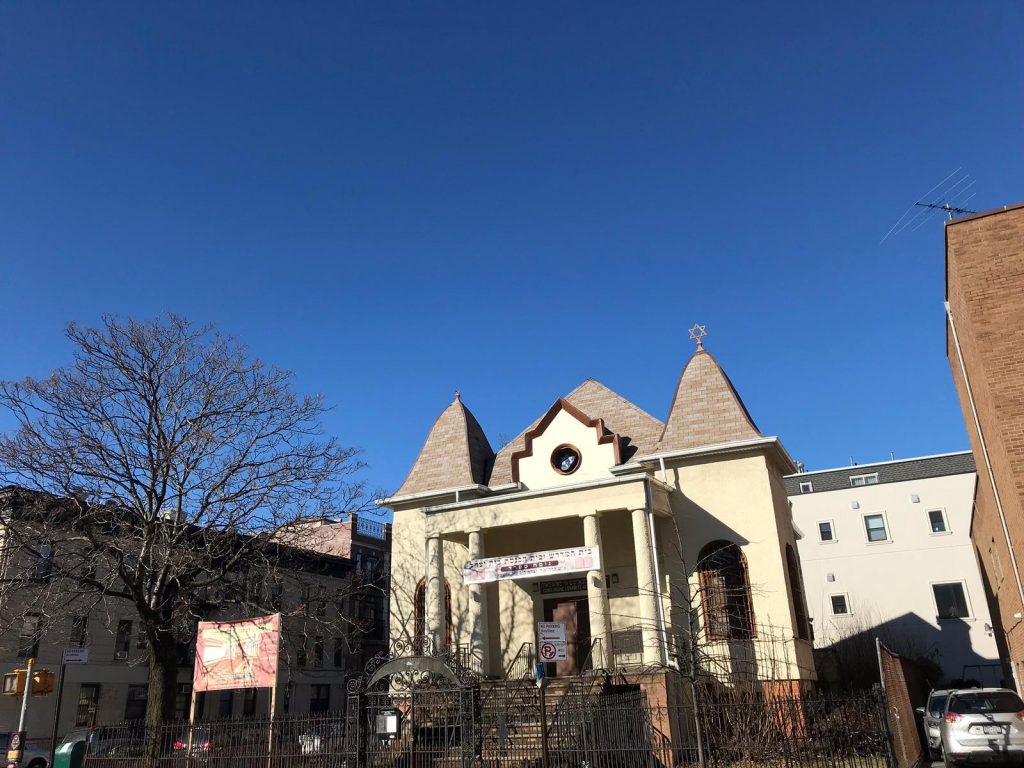 It was built at the turn of the century, just when Brooklyn was accepting its first spillover Jews from Manhattan’s Lower East Side and just four years after Boro Park got its name.

Temple Beth El was Boro Park’s first shul, and at the grand old age of 113 is just a year younger than the oldest building built to be a shul in the entire Brooklyn.

Today known as Chevra Anshei Lubawitz, it is one of the borough’s only surviving examples of tenement-style architectures, with imposing stair towers capped by Moorish spires and topped with large Magen David stars.

The shul has been embroiled these past four years in a battle for its survival, after developers surreptitiously purchased the site and obtained permits to raze the historic building and repurpose it for condominium housing.

The developers are saying they will allow space in the new building for prayers, but an association of mispallelim, local Rabbanim and activists, as well as the city’s incoming public advocate is calling on the city to grant Anshei Lubawitz landmark status. The label brands the building as an historic site, and makes tampering with its infrastructure nearly impossible.

“We write to you on behalf of ourselves — and the Jewish community of Boro Park — to request that the Landmarks Preservation Commission consider the Chevra Anshei Lubawitz Synagogue … for designation as an individual landmark,” write Joseph and Levi Goldberg, mispallelim of the shul for over 70 years and nephews of one of the shul’s early Rabbanim.

“The synagogue,” the letter appeals to Sarah Carroll, who chairs the city’s Landmarks Preservation Commission, “has great significance to the Jewish history of Boro Park, and also for the history of Brooklyn, and is believed to be the oldest undesignated purpose-built synagogue still in synagogue use in Brooklyn.”

The request was accompanied by over a dozen letters, including from Rabbi Yehuda Krinsky of Chabad, Rabbanim, mispallelim, historians and local activists, as well as local elected officials such as Councilmen Brad Lander and Carlos Menchaca.

The Bangladeshi American Friendship Society of North America also added its voice to the request, saying the shul was the first “in a neighborhood that grew into one of the most important Jewish communities in New York and the country.”

Jumaane Williams, a councilman who represents the area and the newly elected city public advocate, penned his own letter late Monday, writing that he is familiar with the shul and its historic significance.

“Chevra Anshe Lubawitz … was the first synagogue in a neighborhood that grew into one of the most important Jewish communities not only [in] New York but the nation,” Williams said in his missive. “It is my strong belief that this location should be landmarked and preserved as a piece of history and a cultural cornerstone.”

The shul, located at 4024 12th Ave., was constructed in 1906, just when New York’s Orthodox community was beginning to move across the Williamsburg Bridge into Brooklyn. It originally housed Temple Beth El but was sold in 1922 to Lubavitch, making it even older than the main Chabad headquarters at 770 Eastern Parkway in nearby Crown Heights. It was erected a year after Brooklyn’s oldest surviving shul, Congregation Ahavas Israel in Greenpoint.

The Lubavitcher Rebbe, Harav Yosef Yitzchak Schneersohn, zt”l, made Anshe Lubawitz one of his first stops while visiting the United States in 1929 and his words are embedded in the shul’s cornerstone.

Joseph Goldberg recalled how back in the 1950s he blew the shofar on Rosh Hashanah in the shul, which was “packed from wall to wall with worshippers.” He said that Yeshivah Toras Emes, Boro Park’s first elementary yeshivah, had its beginnings in the shul when the need for a yeshivah in the neighborhood became apparent in the 1930s.

“The Jewish history of Brooklyn is enormously significant both to Brooklyn and to the general Jewish community,” Goldberg wrote in his petition. “Yet there is currently just one Brooklyn synagogue that has been granted landmark status. Anshe Lubawitz is an excellent candidate for increasing that number.”