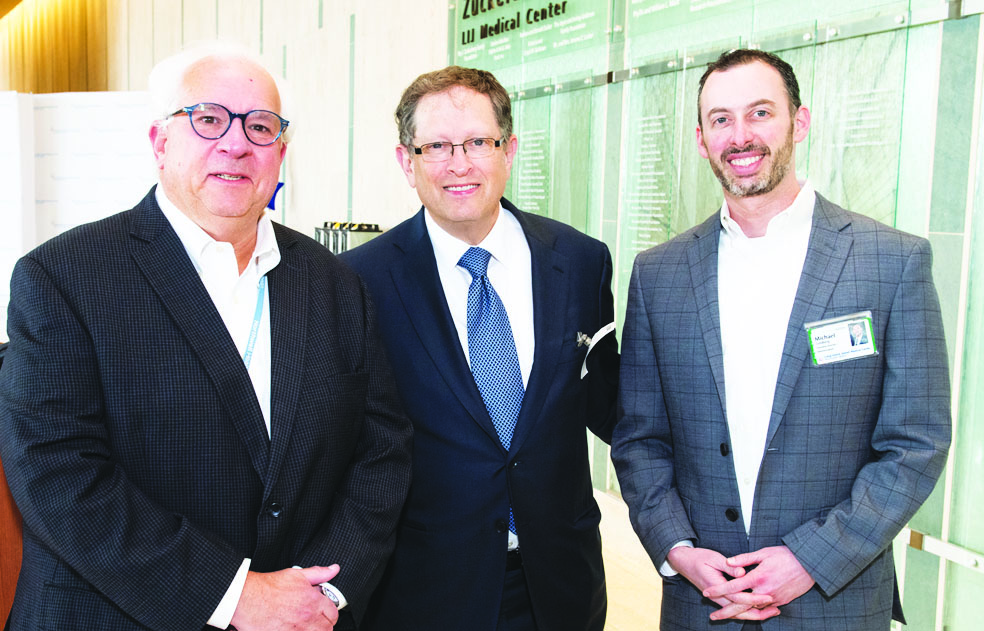 Spacious, inviting, welcoming; a huge modern refrigerator filled to capacity with fresh, appetizing food; built-in chargers for all kinds of devices; a comfortable couch — the brand-new respite room at Long Island Jewish Medical Center has it all, providing unparalleled comforts for patients and their families.

Sunday, March 3, marked the historic ribbon-cutting ceremony for this beautiful, state-of-the-art respite room, the result of a team effort between LIJ and Achiezer and generously dedicated by Mr. and Mrs. Mark and Barbara Silber in loving memory of their parents, Mr. and Mrs. Abraham and Sara Silber, z”l, and Mr. and Mrs. Solomon and Rachela Scheiner, z”l.

The new room, Achiezer’s fourth and largest, most expansive and well-appointed respite room to date, is strategically located in the lobby between the main part of the hospital, the emergency room and the Katz Women’s Building, for easy access.

Sunday’s ribbon-cutting ceremony was the culmination of years of talks with hospital administration, followed by months of planning and building by a dedicated team of workers.

The crowd on Sunday included the LIJ/Northwell Administration; members of the LIJ construction team; Achiezer staff and board members; friends and family of Mr. and Mrs. Mark and Barbara Silber; Mr. and Mrs. Sruly and Chavi Lieber of Dynamic Cabinetry, talented designers of the room, along with Mr. Lieber’s aunt, Mrs. Sandra Gottesman of Oceanside Bikur Cholim. The attractive cabinetry in the room was dedicated by the Liebers in loving memory of Mrs. Gottesman’s husband, Rabbi Moshe Gottesman, z”l.

Mr. Michael Goldberg, executive director of LIJ, gave the opening remarks, thanking the team at LIJ for crafting such a beautiful room. He also spoke about the special partnership between LIJ and Achiezer which allowed this project to come to fruition.

Harav Mordechai Kamenetzky, dean of Yeshiva of South Shore and a close friend of the Silbers and Achiezer, then offered warm divrei brachah.

Rabbi Boruch Ber Bender, president of Achiezer, thanked the many individuals who worked together on this project. He drew a parallel between the way all of Bnei Yisrael were driven to build the Mishkan, no matter their strengths or abilities, and the way everyone present was singularly devoted to giving what they could to help people in their time of need.

Rabbi Bender made special mention of Mrs. Gottesman and her late husband Rabbi Moshe Gottesman (who recently passed away) who serve as exceptional role models of dedication to the mitzvah of bikur cholim.

Through their work in South Nassau Communities Hospital, they were instrumental in the establishment of Achiezer’s first respite room, which is located in that facility.

Rabbi Bender also recognized Mr. Yoeli Steinberg and Mr. Moshe Ratner of Gourmet Glatt for their tireless dedication to ensuring that the respite rooms are stocked with delicious food, as well as Mr. Sruly Lieber and his team who put heart and soul into designing a room that is so aesthetically appealing.

Rabbi Bender acknowledged the dedication of Mr. Naftuli Brach and his cadre of volunteers for their efforts in stocking another respite room which is located in the basement of Cohen’s Children’s Hospital, the pediatric division of LIJ.

A huge thank-you was extended to Mrs. Aliza Wartelsky, program coordinator at Achiezer, for her tremendous devotion to this room in particular and to the entire respite program in general, and to Mr. and Mrs. Mark and Barbara Silber, who jump at every opportunity to help others in the community. Achiezer values their amazing partnership with the Silbers and are constantly inspired by their dedication and generosity.

At the conclusion of Rabbi Bender’s remarks, Mr. Goldberg invited all participants to join him in front of the new room for the official ribbon-cutting ceremony. Mr. Silber first affixed a mezuzah to the door of the respite room, and then the ribbon was cut by the Silbers, Mr. Yoeli Steinberg, Mr. Michael Goldberg, Harav Mordechai Kamenetzky and Mr. Sruly Lieber.

Most exciting of all, only minutes after the ceremony was finished, Dr. Jonathan Herman let Rabbi Bender know that several family members who had just been blessed with a new baby were already enjoying the new room!