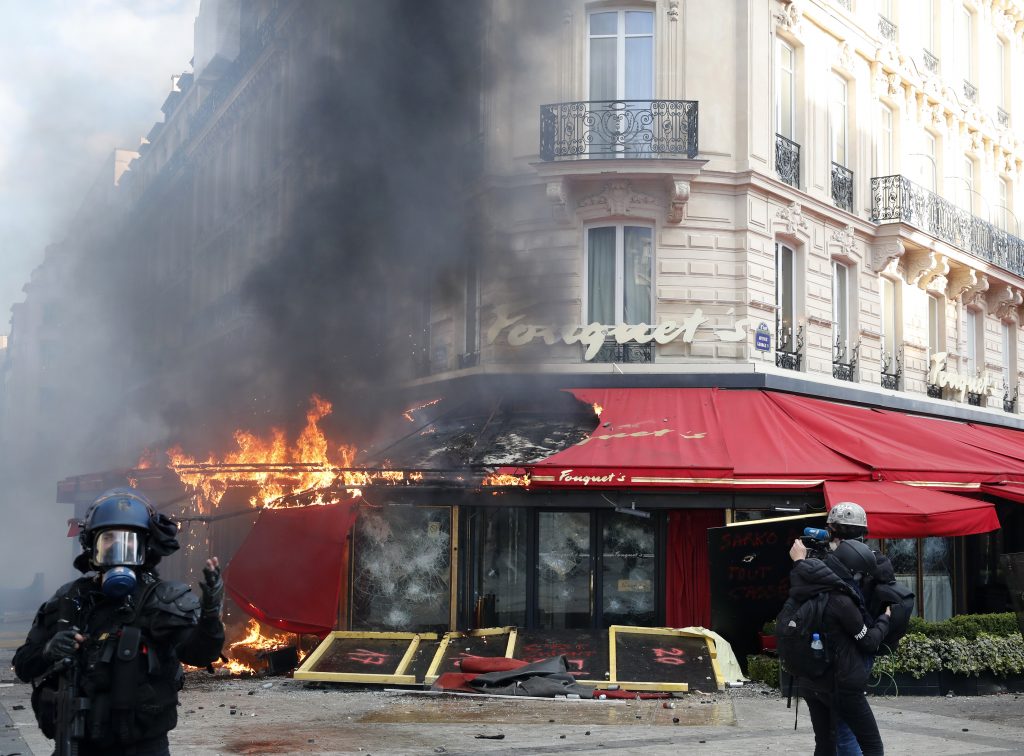 Paris cleaned up one of the world’s most glamorous avenues Saturday after resurgent rioting by yellow vest protesters angry at President Emmanuel Macron stunned the nation.

Luxury stores, restaurants and banks on the Champs-Elysees assessed damage Sunday after they were ransacked or blackened by life-threatening fires. Tourists took pictures as shop owners tried to repair broken windows and city workers scrubbed away graffiti, much of it targeting Macron.

The renewed violence by a movement that had been fizzling in recent weeks was a wake-up call to a president seen as favoring the elite.

Macron promised a crackdown on troublemakers he said “want to destroy the republic, at the risk of killing people.” But he also tweeted that the rioting showed that his government needs to do more to address protesters’ concerns.

On the Champs-Elysees, an eerie calm replaced the hours-long chaos of the day before on the street that Parisians call “the most beautiful avenue in the world.”

No police were visible Sunday, and traffic rolled down cobblestones that had been the scene of battles between rioters and police struggling to contain them.

In the midst of Saturday’s violence, firefighters said that a mother and her child were barely saved from a building set ablaze because it housed a bank on the ground floor. Smoke from fires set by protesters mingled with clouds of tear gas sprayed by police.

The protesters sought to revive their movement Saturday by marking the end of a two-month-long national debate called by Macron that protesters say failed to answer their demands for economic justice.

Police had braced for an uptick of violence, but appeared caught off guard by the speed and severity of Saturday’s unrest.

Authorities and some protesters blamed black bloc extremists who come to demonstrations with the express goal of attacking police and damaging property. They dress in black, including masks and hoods to make it harder for police to identify them, and often target symbols of capitalism or globalization.

Overall, the Interior Ministry said that around 32,000 yellow vest protesters demonstrated nationwide Saturday, including about 10,000 in Paris. That was up from last week, when about 26,000 people marched around France including 3,000 in Paris.

However, it was far from the 250,000 yellow vest demonstrators who protested in December — and a fraction of the 145,000 people who took part in peaceful climate marches Saturday around France, according to the ministry’s figures.

The four-month-old movement tapped into widespread discontent with high taxes and diminishing living standards in working class provinces — and anger at Macron, seen as too friendly with the rich and powerful and out of touch with French concerns.

But the yellow vest movement has lost support because of protest violence, internal divisions and concessions by Macron’s government. The remaining protesters appear increasingly extreme.