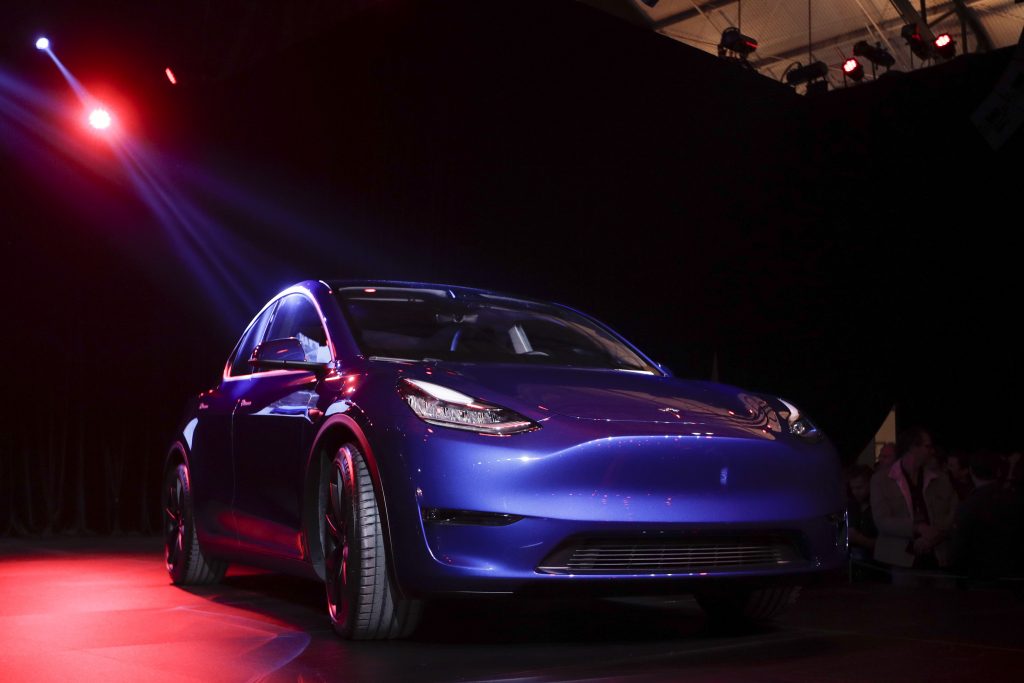 The Los Angeles entrepreneur rolled out the model during a relatively subdued affair at Tesla’s L.A. Design Studio in Hawthorne, Calif., showing a blue vehicle very similar in appearance to the Model 3, but with a higher roofline and more room in the back.

Whether customers will agree with Musk that the Model Y is an SUV, or in fact a hatchback, it will fill a gap in the Palo Alto, Calif., electric-vehicle maker’s lineup.

The car, however, won’t be available until at least late 2020, and won’t do much to solve the company’s current cash problems, raising questions about Musk’s ability to deliver on his promises.

The company has proved unwilling or unable to raise new investment capital in public stock and bond markets, and it’s unclear where the money to fund a new Model Y assembly line would come from. Musk didn’t discuss such matters Thursday. However, Tesla will allow customers to put down a refundable $2,500 and order a Model Y.

A short promo film that introduced the event showed products such as an electric semi truck, a solar roof and a new roadster announced years ago but not yet on the market; Tesla continues to collect customer deposits on them all.

Assuming the car gets built, a long-range version with a 300-mile range has a starting price of $47,000 with an expected delivery of fall 2020, according to Musk. A standard-range model with a 230-mile range was priced at $39,000 with a promised delivery date of spring 2021.

Musk said the SUV would have the “functionality of an SUV, but it will ride like a sports car.”

Dan Ives, managing director at Wedbush Securities, said the $39,000 and $47,000 price points for the standard and long-range versions were what investors wanted to see for mass adoption.

“It met expectations,” he said.

Although the company’s well-documented financial and manufacturing struggles may have removed some of its luster, Tesla’s new model was still highly anticipated.

In addition to the Model 3, the company sells the Model S luxury sedan and the Model X luxury SUV. But it lacks a smaller crossover SUV, one of the hottest segments in the automotive industry.

And Tesla is facing growing competition in the electric-vehicle market. By 2021, the market will be stocked with electric cars from almost every major manufacturer. Already Hyundai and Kia are selling electric versions of the Kona and Niro crossover SUVs priced around $36,000.

The Model Y was unveiled by Musk after a lengthy introduction, during which he recounted the company’s history and rolled out each of the company’s vehicles to hoots, hollers and clapping.

That only intensified when the crossover was finally brought out. But compared with other Tesla product reveals, it was a low-key affair with Musk spending relatively little time talking about the new vehicle.

“It’s not groundbreaking, earth-shattering, revolutionary by any stretch of the imagination,” said Michael Harley, executive editor of Kelley Blue Book. “Obviously, Tesla is playing it safe, but it knows what its customers expect and what its customers like to buy. This is a very safe and conservative model, in terms of styling.”

He said he thought the Model Y would be Tesla’s most popular model and noted the similarities between the Model Y and Model 3 sedan, saying that it seemed like a decision meant to bring the SUV to market as quickly as possible and simplify production.

“The auto industry’s been making cars for well over 100 years now,” Harley said. “And Elon came in 10 years ago and decided he was going to do things differently. It looks like he’s finally conforming to the rest of them. But it’s good.”

Musk discussed vehicle production during his presentation, saying that the difficulty and value of manufacturing were extremely underrated.

Reactions on Twitter were mixed. Investor Ross Gerber, a Tesla cheerleader, tweeted that “Porsche has got to be worried.” Tesla critic @skabooshka wrote, “The only way Musk could put together a Model Y at this point … is if it were a reiteration of the Model 3. So, embarrassed, he downplayed the … Model Y itself and did a retrospective on the company. The event was a dud.”

One snarky tweet put pictures of the Model S and Model Y on top of each other, saying, “Elon plus more burgers = model Y.”

The vehicle’s introduction comes at a time of upheaval for both Musk and the company. Indeed, Musk acknowledged that, telling the crowd, “Thank you for supporting Tesla during this difficult period.”

Two months ago, Tesla announced it would lay off 7 percent of its full-time workforce, as it focused on cutting costs and making a profit as it produces more vehicles.

Then, in February, the Securities and Exchange Commission said Musk should be held in contempt for tweeting about Tesla’s production numbers without having his communication reviewed by company attorneys — a cornerstone of the settlement reached by Musk, Tesla and the SEC over fraud charges stemming from his tweets last year that he was considering taking Tesla private and had “funding secured.”

Musk’s legal team said this week in a legal filing that the contempt charge was an example of “unprecedented overreach.” But if Musk is held in contempt, he could be removed as CEO and banned from serving as an officer of a publicly traded company.

An equally pressing concern is whether the company has enough capital to carry out its manufacturing plans.

This month, Tesla was forced to make a $920-million payment to retire convertible bonds that were due. Had the company’s share price, which closed Thursday at $289.96, remained at $360 or above, at least some of that debt could have been converted into stock. The company reported having $3.7 billion in cash at the end of 2018 and faces a $183-million debt payment next month.

Some analysts had viewed Thursday’s event as little more than a way for the company to raise cash.

Within a week of unveiling the Model 3 in 2016, the company announced that it had received more than 325,000 reservations, which cost $1,000 each. The reservation system raised significant cash and boosted Tesla’s shares.

The view that the company is suffering from a cash crunch has been reinforced by Tesla’s announcement this month that it planned to shift vehicle sales online and close most of its stores — even though it had previously called the stores key to its marketing strategy.

The backlash was so fierce, however, that the company quickly had to backpedal, announcing that it would close only some of the stores and leave others open so that customers could take test drives. The rapid strategy shift only fed the perception that Musk was running the company on the fly.

Another issue is whether the company’s pricing is realistic.

Tesla talked about a $35,000 Model 3 three years ago, but while it delivered its first Model 3s in the summer of 2017, the cheapest versions typically cost in the mid-$40,000 range. It wasn’t until last month that Tesla announced it would take orders for the $35,000 version, which has a shorter range. They are expected to be delivered as soon as the end of the month, according to the Tesla website.

As with pricing, analysts have cautioned that Musk’s manufacturing timelines are often overly optimistic. The planned ramp-up for Model 3 production ended up being delayed by nine to 12 months, Toni Sacconaghi, senior technology research analyst at Bernstein, said in a note Tuesday to clients.

Tesla grappled with automation issues on the Model 3 assembly line. Eventually, the company erected a tent to house an additional general assembly line for Model 3 vehicles, and the company has come close to hitting its production goal of assembling 5,000 cars a week.

Musk said Thursday that in a year, Tesla will have made about 1 million vehicles.