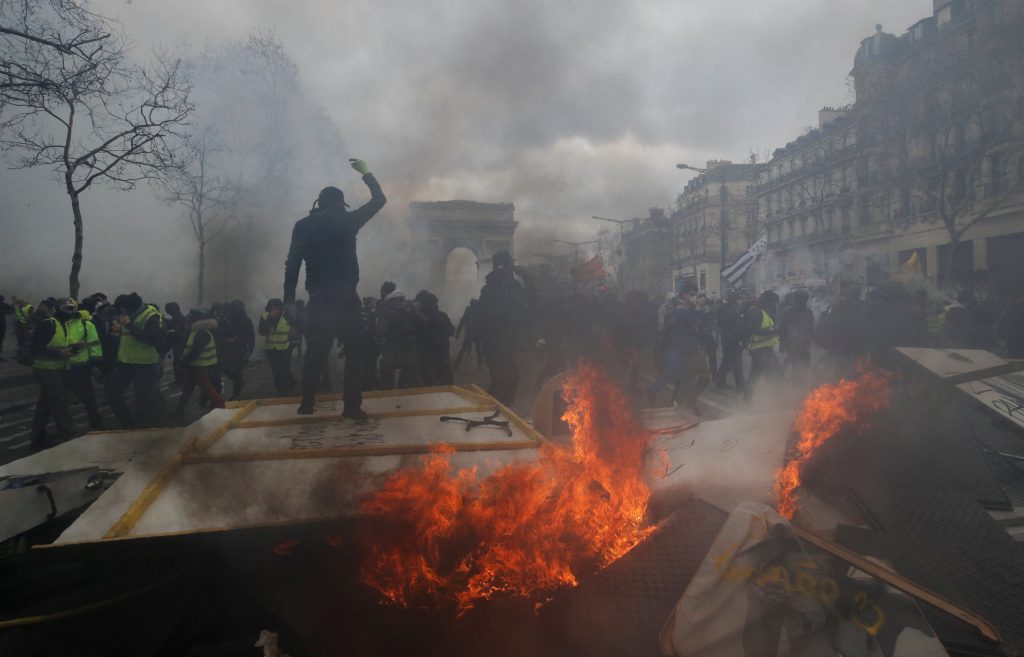 Rioters set fire to a bank and ransacked stores on Paris’s Champs Elysees avenue on Saturday, in a new flare-up of violence as France’s yellow vest protests against President Emmanuel Macron and his pro-business reforms entered a fourth month.

Police fired tear gas and water cannon as the protests turned violent after weeks of relative calm, during which marches had attracted declining numbers of participants.

A Banque Tarneaud branch spewed flames before firefighters arrived and rescued a woman and her infant from the building, with 11 suffering minor injuries, the fire department said.

Rioters also set fire to an upmarket handbag store and two newsstands on the Champs Elysees, while scattered bonfires burned on the thoroughfare.

Protesters hurled cobblestones at riot police through clouds of tear gas in front of the Arc de Triomphe monument, which was ransacked at the peak of the protests in December.

The canvas awning was later set on fire of the swanky brasserie, known in France as the place where conservative Nicolas Sarkozy celebrated his presidential election victory in 2007.

Macron cut short a weekend ski trip in the Pyrenees to return to the capital on Saturday night for a crisis meeting with ministers.

“We are attached to constitutional rights, but we’ve got people who through all means quite simply want to make a wreck of the republic, to break things and destroy, running the risk of getting people killed,” Macron said.

“I want us to very precisely analyse things and as quickly as possible take strong, complementary decisions so this doesn’t happen again,” he told ministers.

Police said 42 protesters, 17 of their own officers and one firefighter were injured.

The interior ministry estimated 10,000 people had participated in the protest in Paris, compared with 3,000 on the previous Saturday. Nationwide, protesters were estimated at 32,300, compared with 28,600 last week.

Interior Minister Christophe Castaner said that although the protest was relatively small, there had been more than 1,500 “ultra violent” people out looking for trouble.

“They decided, perhaps as a swansong, to come attack – and I use their words – Paris,” Castaner said, adding that more than 1,400 police officers were mobilised.

A separate, peaceful march against climate change through central Paris drew as many 36,000 people, police estimated. Some 145,000 people marched nationwide.

Yellow vest protesters had promised to draw bigger numbers to mark the fourth month since the movement erupted in mid November over since-scrapped fuel tax hikes and the cost of living.

Named after the high-visibility vests French drivers have to keep in their cars and worn by protesters, the revolt swelled into a broader movement against Macron, his reforms and elitism.

However, the weekly demonstrations, held every Saturday in Paris and other cities, have been generally getting smaller since December, when Paris saw some of the worst vandalism and looting in decades.

After the spike in violence, Macron offered a package of concessions worth more than 10 billion euros ($11 billion) aimed at boosting the incomes of the poorest workers and pensioners.

His government ordered police to crack down on the protests in January, leading to complaints of police brutality.

The 41-year-old former investment banker also launched a series of national debates aimed at determining what policies people want the government to focus on. Saturday’s protests coincided with the end of the debates.