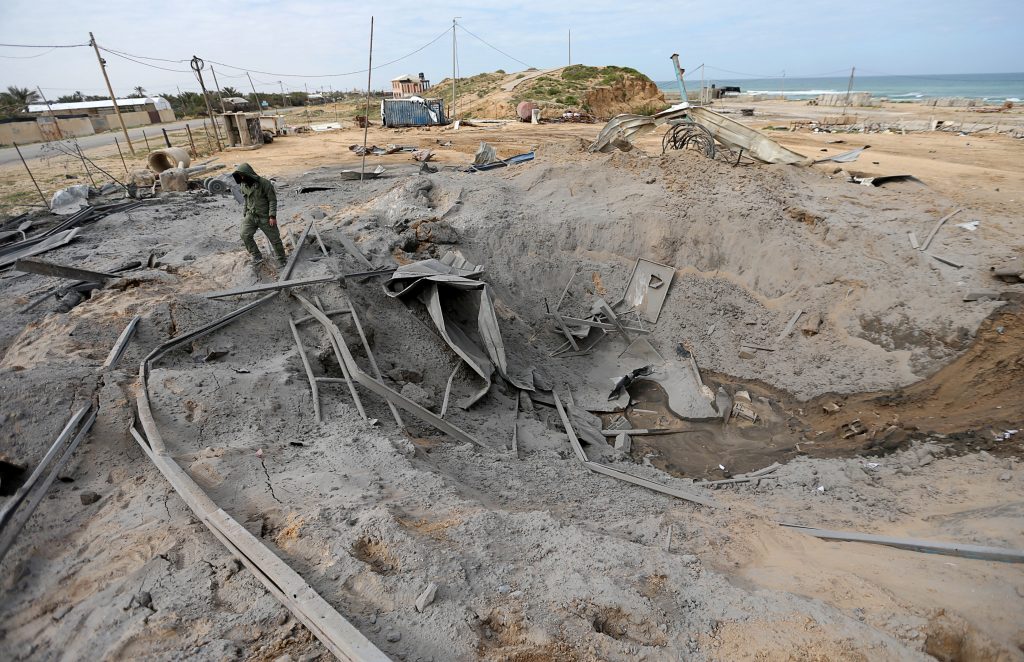 Rocket attacks on Israel by Gaza Arab terrorists continued on Friday, with the IDF saying that it had identified at least four such attacks on southern Israel Friday morning, with at least five others fired overnight Thursday.

Red Alert sirens sounded throughout the Gaza border area. The Iron Dome missile defense system knocked out three of the four rockets in mid-air, with shrapnel from one of the missiles falling in the yard of a school building in Sderot. There were no injuries or damage reported in the Friday morning attacks. The Eshkol Regional Council, located next to the Gaza border fence, said that school would be in session as usual on Friday.

Overnight Thursday, the IDF said that it hit some 100 terror targets in Gaza. Among the targets were rocket factories, underground terror tunnel infrastructure, and a Hamas command center in Gaza City.

According to a map released by the IDF, terror targets throughout Gaza were hit, and photos showed the before and after of several of the targets, including a large underground factory for the manufacture of rockets. Gaza sources said Friday that four people were injured

The massive attacks were in response to rocket attacks on the Gush Dan area Thursday night. Sirens sounded throughout Tel Aviv and the region, bringing the city to a halt as residents and visitors on a busy Thursday night out sought shelter from the incoming rockets. No injuries or damage were reported in the attack, in which two rockets fell in open areas. Both Hamas and Islamic Jihad denied responsibility for that attack.

After the attack Prime Minister Binyamin Netanyahu convened the Security Cabinet to discuss Israeli response. Netanyahu ordered ministers not to discuss the attacks in the media, but a wave of politicians seeking office, from Benny Gantz to Avigdor Liberman to Naftali Bennett slammed the government for its lack of sufficient response in previous attacks, leading to the current situation. Typical of politicians’ responses was that of Liberman, who said that “the theory that you can buy security in exchange for giving tens of millions of dollars to terrorists has collapsed. The writing was on the wall regarding this round of rocket attacks. I now expect Netanyahu, in his capacity as defense minister, to take responsibility for failing to deal properly with Gaza terror.”

In a statement Friday morning the IDF said that “Hamas is responsible for everything that happens in Gaza, including the terror that comes from there. The IDF considers any attempt to harm Israeli civilians a very serious matter, and will continue to attack these sources of terror.”