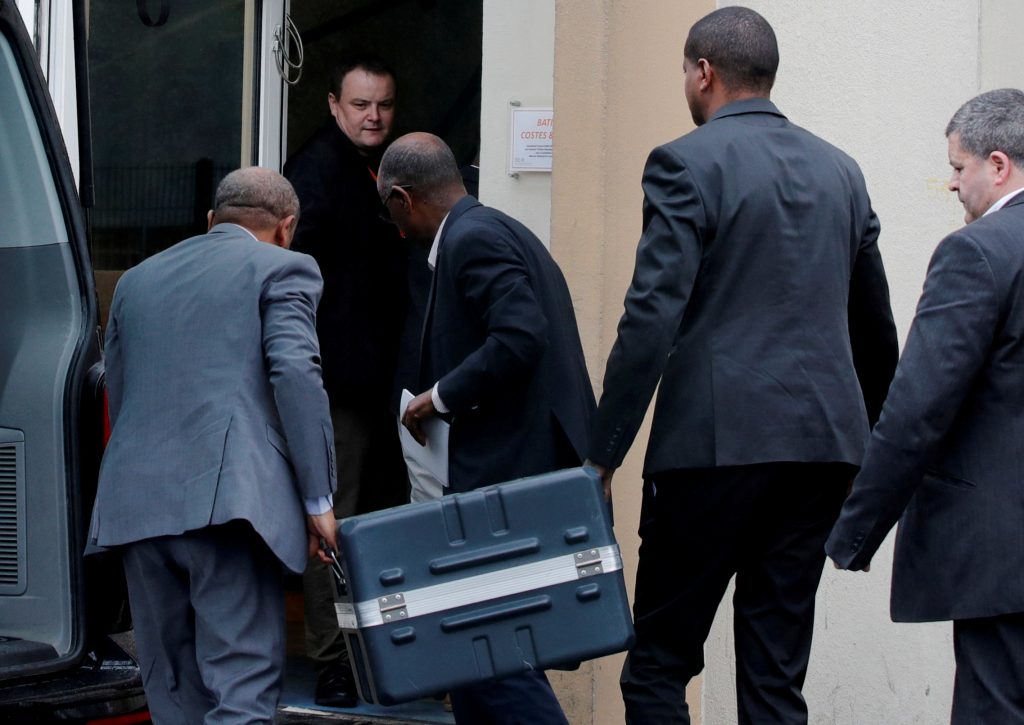 France’s air safety agency on Friday began studying data from the black boxes of a Boeing 737 MAX 8 plane that crashed in Ethiopia, as regulators the world over grounded the plane and the U.S. plane-maker halted deliveries of its latest model.

The Ethiopian Airlines jet crashed soon after takeoff from Addis Ababa on Sunday, killing 157 people. It was the second crash involving a 737 MAX 8 since October, when a Lion Air flight plunged into the sea off Indonesia with 189 people on board.

Investigators will be looking for any links between the two air disasters.

The U.S. Federal Aviation Administration (FAA) grounded all Boeing MAX jets in service because of similarities.

Boeing said it had paused deliveries of its fastest-selling 737 MAX aircraft, built at its factory near Seattle, but continues to produce the single-aisle version of the jet at full speed while dealing with the worldwide fleet’s grounding.

Possible links between the accidents have rocked the aviation industry, scared passengers, and left the world’s biggest plane-maker scrambling to prove the safety of a money-spinning model intended to be the standard for decades.

The flight data and cockpit voice recorders were handed over to France’s Bureau of Enquiry and Analysis for Civil Aviation Safety (BEA) on Thursday. The first conclusions could take several days.

An Ethiopian team investigating the crash has arrived in Paris and the investigation process has started, Ethiopian Airlines said on Friday.

U.S. lawmakers said on Thursday the 737 Max fleet would be grounded for weeks if not longer until a software upgrade could be tested and installed.

Boeing has said it would roll out the software improvement “across the 737 MAX fleet in the coming weeks.”

The captain of Ethiopian Airlines Flight 302 requested permission to return to Addis Ababa airport three minutes after takeoff as it accelerated to abnormal speed, The New York Times reported.

All contact between air controllers and Flight 302 to Nairobi was lost five minutes after it took off, a person who reviewed air traffic communications told the newspaper.

Within a minute of the flight’s departure, Captain Yared Getachew reported a “flight control” problem as the aircraft was well below the minimum safe height during a climb, the newspaper reported, citing the source.

After being cleared by the control room to turn back, Flight 302 climbed to an unusually high altitude and disappeared from radar over a restricted military zone, the source added.

Nations around the world, including an initially reluctant United States, have suspended the 371 MAX models in operation, though airlines are largely coping by switching flights to other planes in their fleets.

Nearly 5,000 MAXs are on order, meaning the financial implications are huge for the industry.

“We continue to build 737 MAX airplanes while assessing how the situation, including potential capacity constraints, will impact our production system,” Boeing spokesman Chaz Bickers said.

Boeing would maintain its production rate of 52 aircraft per month, of which the MAX, its newest version, represents the major share. However, Boeing declined to break out exact numbers.

In what may presage a raft of claims, Norwegian Air has said it will seek compensation from Boeing for costs and lost revenue after grounding its fleet of 737 MAX.

Airline Garuda Indonesia said there was a possibility it would cancel its order for 20 Boeing 737 MAXes, while Malaysia Airlines said it was reviewing an order for 25 of the aircraft.

Under international rules, Ethiopians are leading the investigation but France’s BEA will conduct black box analysis as an adviser. The U.S. National Transportation Safety Board (NTSB) was also sending three investigators to assist.

The cause of the Indonesian crash is still being investigated. A November preliminary report, before the retrieval of the cockpit voice recorder, focused on maintenance and training and the response of a Boeing anti-stall system to a recently replaced sensor, but gave no reason for the crash.