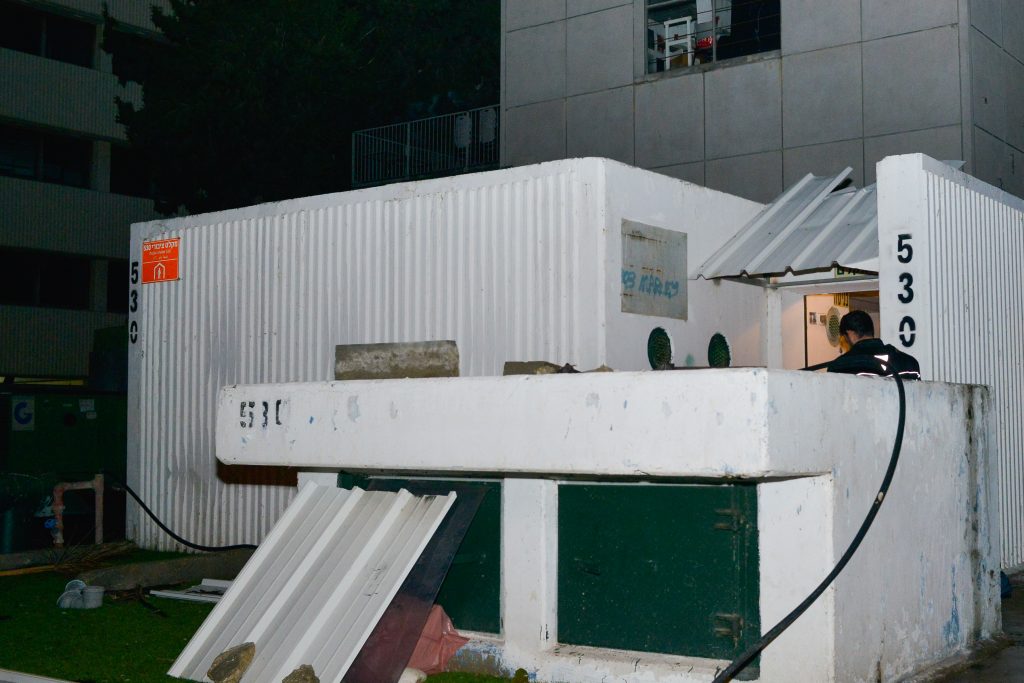 One rocket was reportedly intercepted by an Iron Dome missile, another landed in an open area. A video was released that showed two interceptors streaking into the night sky above Tel Aviv, and detonating.

However, a subsequent report on Ynet quoted defense sources saying that no incoming rockets were shot down.

The alert was the first in the Tel Aviv area since Operation Protective Edge in 2014. Eyewitnesses said they heard loud explosions.

B’chasdei Shamayim, only light injuries were reported. United Hatzalah said their personnel treated a number of people for shock, and a 10-year-old boy was lightly injured while running to a bomb shelter.

The remnants of a rocket reportedly fell in northern Tel Aviv.

U.S. Special Envoy to the Middle East Jason Greenblatt blamed Hamas for the rocket fire, tweeting “Hamas violently suppresses its own people demonstrating against Hamas’ rule & failures today and NOW fires rockets at cities in Israel. OUTRAGEOUS! This is what prevents the world from helping the people of Gaza! We strongly support Israel in defense of its citizens. Always!”

Media reports said that the Fajr-5 rockets were thought to have been launched by Palestinian Islamic Jihad (PIJ), though the group denied it.

A Hamas official was quoted by The Times of Israel saying that the terror group “has no interest in an escalation” with Israel, and he “has no idea” who fired the rockets.

The Home Front Command has not yet issued any special instructions to the public, and says they can carry on normally.

There were demands for a vigorous response to the attack.

Blue and White leader and former army chief of staff Benny Gantz said that “a significant and severe response” was necessary, “otherwise it will be impossible to renew our deterrence.”

Education Minister and security cabinet member Naftali Bennett urged: “The time has come to defeat Hamas and eliminate its leaders, I am calling on the prime minister to convene the cabinet and to force the IDF to present a plan for the destruction of Hamas.”

Former Defense Minister and head of Yisrael Beytenu, Avigdor Liberman, called on Israel to “return to the policy of punishing those responsible.”

The United Right party issued a statement saying: “The Israeli government’s containment policy failed tonight. We received a rocket to the center of Tel Aviv The security consultations and words should be replaced by actions. Only a strong response will bring security and honor back to the people of Israel.”

Finance Minister Moshe Kahlon, a member of the security cabinet, said the “serious” incident will require an “appropriate response.”

Prime Minister Binyamin Netanyahu will hold a security consultation at the Defense Ministry headquarters in Tel Aviv “in the near future,” his spokesperson said.

Palestinian media said that Hamas is currently evacuating military posts in the Gaza Strip in anticipation of an Israeli retaliation.

In addition, a delegation of Egyptian security officials who were in Gaza for the purpose mediating a long-term truce with Israel, were reportedly leaving to avoid being caught in IDF air raids.

According to Palestinian media, Israeli officials sent the delegation an urgent message, advising them to leave.

Earlier in the day, Hamas reportedly used force to put down riots protesting the economic conditions in the coastal enclave. It was suggested in the Israeli media that the terror group might have resorted to a rocket attack on Israel to divert attention from the unrest in their territory.

The Yerushalayim municipality announced that it has no plan to cancel a marathon scheduled for Friday morning.