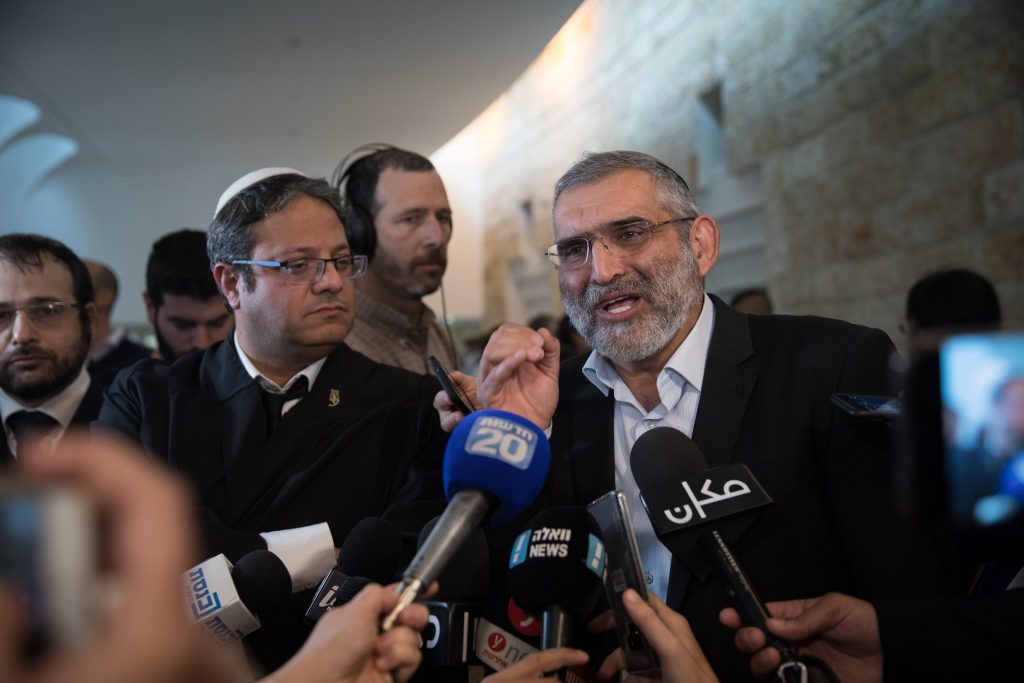 The far-right Otzma Yehudit party ran into unsympathetic judges in a High Court hearing on Thursday to decide their eligibility to run in the April elections.

Justice Uzi Fogelman criticized Michael Ben Ari for remarks made at a rally in Afula last year which were deemed racist. Ben Ari told the protest gathering that the tender “has been opened to the enemy as a form of equal rights,” referring to the Arab population.

“That sentence is crystal clear,” Fogelman said according to The Times of Israel. “It clarifies Ben Ari’s lexicon of useful terms. This is where this masquerade is revealed. What context of national struggle is there in this case concerning a citizen who wants to live in Afula?”

The judges cited another contentious remark of Ben Ari’s: “We need to call it as it is — they are our enemy, they want to annihilate us. Of course there are loyal Arabs, but they can be counted as one percent and less than that. Unfortunately, the overwhelming majority of them are full partners to their brothers in Gaza.”

Ben Ari’s lawyer Itzhak Bam asserted that his client had “no problem” with Arab Israelis who are loyal to the state.

Asked by Justice Yitzchak Amit if 99 percent of Arab Israelis are considered “enemies,” if they are disloyal in his view, the attorney confirmed, “that’s the logic.” He added that it was hard to know the number today since “anyone who expresses those views is ostracized, condemned.”

State prosecutor Aner Helman argued that the former National Union MK has been inciting to racism for years and, notwithstanding his denials, does not distinguish between the general Arab public and enemies of the state. He said that for Ben Ari, Arabs “have no faces, they are all traitors, a fifth column, and a murderous nation.”

In a side skirmish, National Union Chairman MK Betzalel Smotrich championed the honor of the Knesset in the face of a disparaging remark by Chief Justice Esther Hayut.

During the proceedings, Smotrich called out an objection. Hayut reprimanded him, saying, “Don’t shout here, this isn’t the Knesset.”

Hayut responded: “This isn’t the Knesset, there are different legal procedures here.”

Smotrich: “I’m happy for the clarification.”

Hayut: “I need clarify for you nothing.” In response, Smotrich said to her, “Don’t belittle the Knesset and the public.”

Indicating that she was not picking on the right wing, Hayut also rebuked Labor MK Stav Shaffir, who tried to speak out of turn: “You won’t speak here, it isn’t the Knesset.”

Fogelman seconded the rebuke, saying: “This isn’t anarchy here; what you’re doing here is unprecedented, the politicians will not speak here.”

Afterwards, Smotrich commented: “You needed to be here to see the disgusting contempt and condescension of the judges towards the Knesset members present here in the hearing, from both sides of the political fence. They simply despise us and what we represent. And it’s in the nature of man to reciprocate other’s attitudes towards them.

“What’s under discussion here is the very composition of the Knesset in the next term, and involvement of Knesset members in this debate is the most legitimate thing in the world. It’s also legitimate for the judges to decide not to let MKs talk so as not to turn the debate into a political election platform, but there’s a way to relate to a Knesset member who’s in the middle of a sentence. They wouldn’t treat someone like that if they had a modicum of respect. And that’s nothing new,” Smotrich concluded, according to Arutz Sheva.