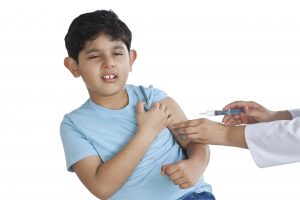 The New York City Health Department is warning five Williamsburg yeshivos that they face steep fines if they continue to allow into class students who have not received the measles-mumps-rubella (MMR) vaccine.

There has been a measles outbreak in Boro Park and Williamsburg since October. Twenty-five new cases have been identified in the past week, bringing the total to 158, including 137 children under the age of 18.

In December, the agency announced that it would not allow unvaccinated children to attend yeshivos in the affected neighborhoods until the outbreak is declared over. One Williamsburg yeshivah was found in January to have not complied; according to the Health Department, that yeshivah “is connected to 28 cases in students and an additional 14 cases directly linked to the school.” That yeshivah has since become compliant.

On Thursday, the agency said it has found five more Williamsburg yeshivos – four girls schools and one playgroup – that allowed unvaccinated children to attend; three of them had children with meeasles in attendance.

The five Williamsburg schools will be given a final chance to exclude children who were not immunized, or the principal may face a penalty of $2,000 per unvaccinated student per day.

More serious symptoms may sometimes occur, including pneumonia, encephalitis (swelling of the brain) or death. According to the Health Department, about 1 out of 1,367 children under 5 years old developed a late, fatal complication of measles, subacute sclerosing panencephalitis (SSPE), an average of 9.5 years after recovery from measles.

If an expectant mother contracts measles, it may result in premature birth, low birth-weight, or miscarriage.

“As the city’s doctor, and a pediatrician, I am very concerned that children without the measles vaccination, are at unnecessary risk for serious, and potentially fatal, symptoms related to measles,” said Health Commissioner Dr. Oxiris Barbot. “The outbreak is not over, and we will continue to see additional cases as long as unvaccinated students are not properly excluded from attending school.”

People who have received one dose of the vaccine are 95 percent protected; the second dose raises the protection level to 97-99 percent.

The Health Department recently recommended that health-care providers serving Orthodox Jewish communities in Williamsburg and Boro Park give an early, extra dose of the MMR vaccine for children between the ages of 6 months to 11 months.