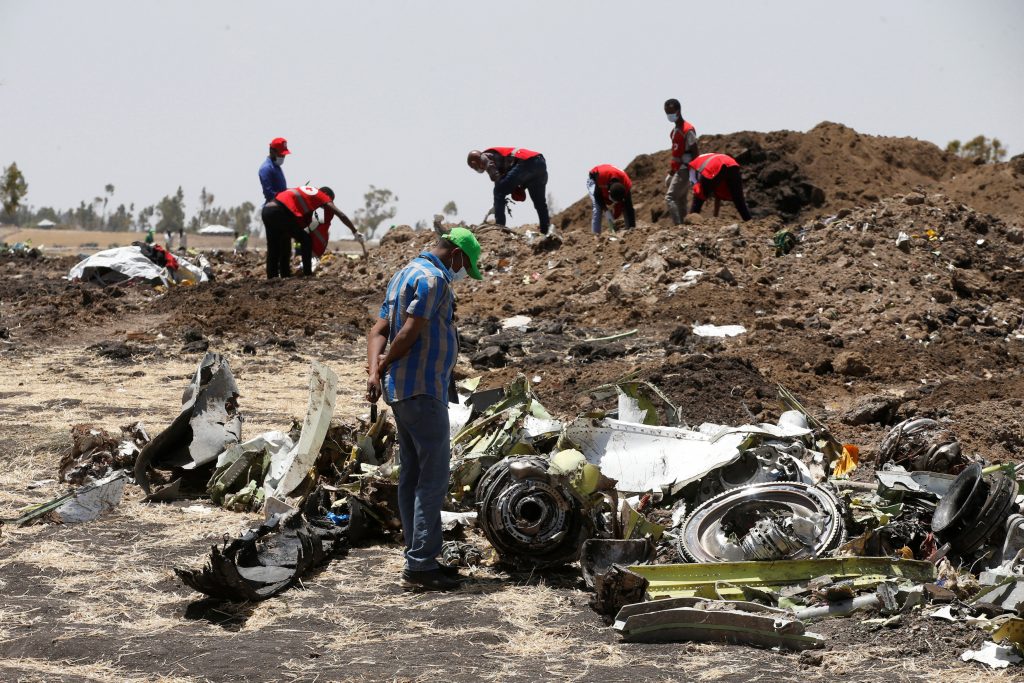 Relatives of the Ethiopian victims of ET Flight 302 gathered silently in a hotel conference room in Addis Ababa on Thursday, before boarding buses headed for the crash site.

People were slumped forward in their chairs, their gazes downcast. Some men held their heads in their hands. Women in head scarves leaned for comfort against their relatives.

Some stood up to ask questions. They said they wanted more “transparency” from the airlines and more details of Sunday’s accident.

An airlines staff member replied that the crash was under investigation and that more details were emerging day by day.

All 149 passengers and eight crew aboard the flight were killed when their Ethiopian Airlines Boeing 737 MAX 8 crashed six minutes after taking off from the high-altitude capital of Ethiopia. The nation of 105 million people has long been proud of its state-owned airlines, its most successful company and the only profitable airline in sub-Saharan Africa.

Nine Ethiopians were killed in the crash, along with 32 Kenyans, 18 Canadians, and eight people each from China and Italy, as well as two Israelis. A total of 35 nationalities were on board.

The mourners gathered at the Ethiopian Airlines-owned Skylight Hotel near Bole International Airport. Some held up framed photographs of young loved ones.

The room filled over the course of a half hour, becoming a packed, makeshift grieving center.

Staff from United Nations agencies were also planning to visit the site on Thursday to pay their respects, an Ethiopian Airlines staff member told Reuters.

The airline said on Twitter that an Ethiopian delegation had flown the black boxes from flight ET 302 to Paris for investigation. The contents of the flight data recorder and cockpit voice recorder will provide critical details about what happened, experts say.

The crash was the second disaster involving the 737 MAX, the world’s most-sold modern passenger aircraft, in less than five months, and by the end of Wednesday, the jet had been grounded globally by regulators and airlines.

The jet plunged into a field 37 miles outside Addis Ababa, and the impact of the crash and fire left the victims’ remains in fragments that could take weeks or months to identify, experts say.