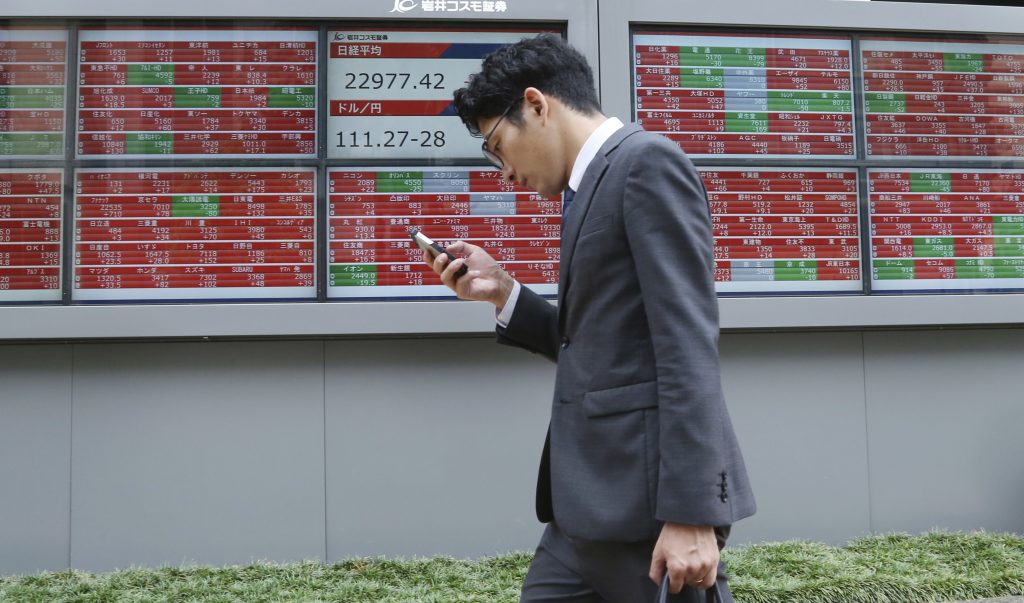 Asian shares stumbled on Thursday after Chinese data signaled further weakness in the world’s second-biggest economy while the pound eased off nine-month highs ahead of another Brexit vote.

Spreadbetters pointed to a weak start for Europe while E-minis for the S&P 500 eased 0.1 percent and Dow minis slipped 0.2 percent.

MSCI’s broadest index of Asia-Pacific shares outside Japan fell 0.2 percent after treading water for most part of the day.

Chinese shares were the biggest drag on the index after data showed growth in the country’s industrial output fell to a 17-year low. A mixed bag of major data also showed property investment is picking up, while overall retail sales were sluggish.

Shanghai’s SSE Composite index stumbled 1.2 percent in the aftermath of the figures which suggested more support measures from Beijing were likely, while the blue-chip CSI 300 slipped 0.7 percent.

Investors were keenly watching the data for clues about the health of China’s economy after growth cooled to 6.6 percent last year.

Despite China’s slowing growth, Asian markets have had an impressive rally this year, with the MSCI index climbing about 10 percent largely after the U.S. Federal Reserve all but abandoned its rate hike plans.

Analysts, however, remain skeptical about how much further the share rally would run as slowing global growth, weak corporate earnings and trade tensions between the United States and China hang heavy on risk assets.

“Before we conclude that this market still has decent legs, we’d like to see equity prices supported by stronger macro data, lifted by better earnings trends, and confirmed by stable-to-rising yields,” David Lafferty, chief market strategist at Natixis, said in a note titled “Rally vs Reality.”

The state of U.S.-China trade talks also weighed on investors after President Donald Trump said he was in no rush to complete an agreement. Trump and his Chinese counterpart Xi Jinping had been expected to hold a summit at the president’s Mar-a-Lago property in Florida later this month, but no date has been set for a meeting.

Most of the action in forex markets was in sterling after the British parliament rejected leaving the European Union without a deal, paving the way for a vote that could delay Brexit until at least the end of June.

The rejection of a no-deal Brexit sent the cable rallying to $1.3380, the highest since June 2018. It jumped 2.1 percent for its best one-day percentage gain since April 2017.

The currency pared back some of those gains on Thursday and was last down 0.6 percent at $1.3258.

“Yesterday’s vote to reject a no-deal Brexit does not remove the risk of a disorderly Brexit on March 29,” Singapore’s DBS said in a note. “Hence, the pound’s appreciation yesterday is still set on shaky and not on firm foundation.”

Analysts said the real test for sterling was yet to come as lawmakers still need to agree on a way forward before an extension on Britain’s exit could be obtained from the European Union.

“If they manage to achieve cross-party support for a deal, likely a ‘softer Brexit’ sort of a deal – this could potentially be very good news for U.K. assets,” said Russel Silberston, Co-Head of Multi Asset at Investec Asset Management.

“If Parliament fails to come to an agreement, it would go to a second referendum. My concern is that this would call into question the role of Parliament and could have serious future political consequences,” Silberston added.

The euro paused after four straight sessions of gains took it to the highest since March 5. It was last at $1.1317.

The dollar index inched up against a basket of currencies to 96.65. Against the Japanese yen, the greenback was stronger at 111.55.

Oil prices extended overnight gains with U.S. crude up 12 cents per barrel at $58.38 and Brent adding 22 cents to $67.77, boosted by OPEC-led supply cuts, U.S. sanctions against Venezuela and Iran and an unexpected dip in U.S. crude oil stocks and production.