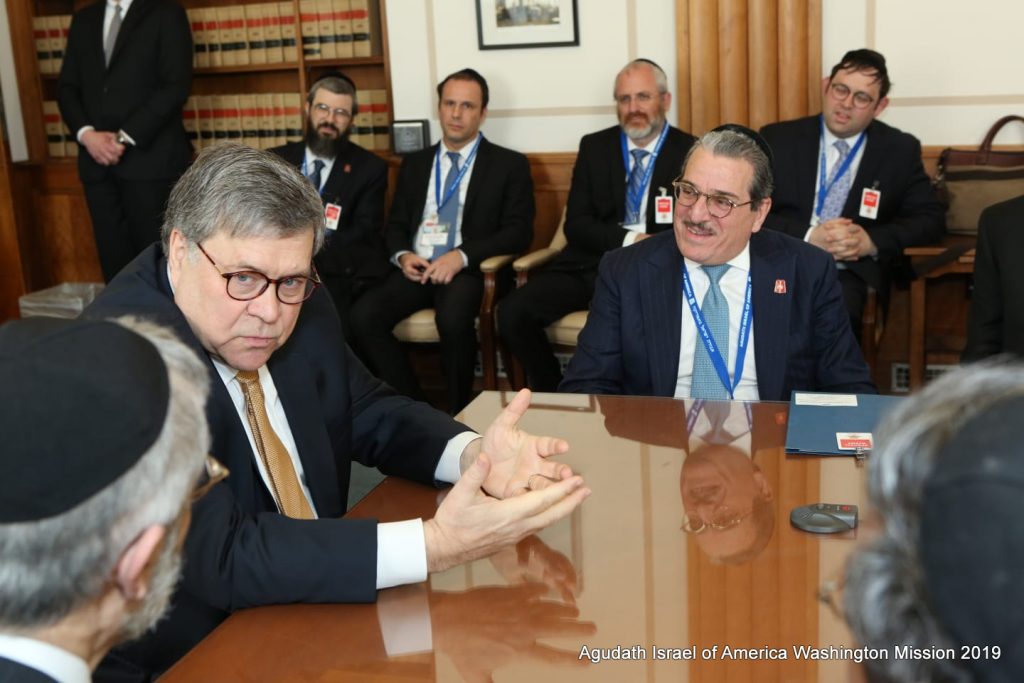 27 years after he was honored with the Humanitarian Award at Agudath Israel of America’s 70th annual dinner for taking a strong stance against religious discrimination in a Rockland County village, Attorney General William Barr once again proved himself an ally by assuring delegates to the Agudah’s Washington mission of the federal government’s commitment to upholding the religious rights of every United States citizen.

Attorney General Barr met with the Agudah group at the Robert F. Kennedy Department of Justice Building on Wednesday morning. With instances of zoning laws and other regulations cropping up with alarming frequency in an effort to stop the Jewish community’s spread, particularly in the greater Lakewood area and in Upstate New York, religious discrimination has become a significant concern over the past several years. Having served previously in the same capacity from 1991 to 1993, Attorney General Barr played a key role in the 1992 lawsuit brought against the Village of Airmont, which attempted to ban synagogues within its borders in an attempt to stem the growth of the Monsey community. That precedent setting case has been cited in numerous similar lawsuits and Attorney General Barr said that his office is proactively pursuing several cases of religious discrimination, an issue that he considers to be a top priority.

That news comes as welcome relief to many, including Rabbi Avi Schnall, the Agudah’s New Jersey director, who alerted the attorney general to incidents of religious discrimination in Lakewood, New Jersey.

“As residents of this great country, people of all faiths should feel confident in the fact that the constitution protects the free exercise of religion,” said Rabbi Schnall. “Over the years Attorney General Barr has proven himself as a staunch defender of those rights and a true friend to the many faith based communities throughout the United States.”

Attorney General Barr also expressed his support of school choice, another issue that his office will be actively addressing by defending parents’ rights to select educational institutions for their children that best reflect their values and priorities. The attorney general said that he intends to promote the development of school choice programs nationwide.

“With all the negativity and rising anti-Semitism around us, the opportunity to dialogue with Attorney General Barr and to hear him express his unapologetic support for religious rights is deeply reassuring,” said Chaskel Bennett, a member of the Agudah’s board of trustees. “We look forward to working closely with the US Justice Department’s civil rights division under AG Barr’s leadership to ensure that the constitutionally guaranteed rights of all Americans are upheld, enabling them to practice their religion freely no matter where in the United States they live.”