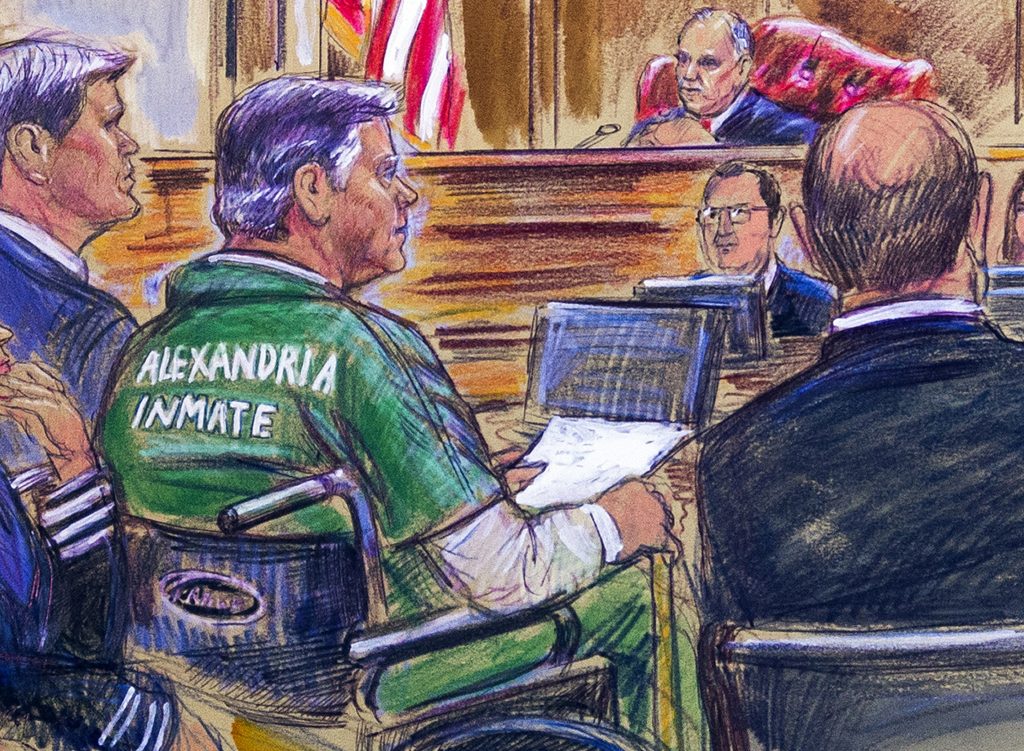 A federal judge on Wednesday sentenced former Trump campaign chairman Paul Manafort to an additional three and one-half years of prison, questioning his remorse and rebuking him for his crimes and years of lies. That makes seven and one-half years for Manafort, coming on top of the roughly four-year term he received last week in a separate case in Virginia.

Adding to his legal woes, Manafort was also charged Wednesday with mortgage fraud, conspiracy and other counts in a new indictment in New York City. The state charges appear at least partly designed to guard against the possibility that he could be pardoned by President Donald Trump and freed early on his federal convictions. The presidential power does not extend to state charges.

Before sentencing Manafort in Washington, U.S. District Judge Amy Berman Jackson told him, “It is hard to overstate the number of lies and the amount of fraud and the extraordinary amount of money involved” in the federal conspiracy charges related to his foreign lobbying work and witness tampering.

Manafort asked for mercy, saying the criminal charges against him have “taken everything from me already.” He pleaded with the judge not to impose any additional time beyond the sentence he had received last week.

“I am sorry for what I have done and all the activities that have gotten us here today,” Manafort said in a steady voice as he read from a written statement. “While I cannot undo the past, I will ensure that the future will be very different.”

The 69-year-old, who arrived in court in a wheelchair, said he was the primary caregiver of his wife and wanted the chance for them to resume their life together.

“She needs me, and I need her. I ask you to think of this and our need for each other as you deliberate,” Manafort said. “This case has taken everything from me already — my properties, my cash, my life insurance, my trust accounts for my children and my grandchildren, and more.”

The hearing was a milestone moment in special counsel Robert Mueller’s investigation into possible coordination between the Trump campaign and Russia in the 2016 election campaign. Manafort was among the first people charged in the investigation, and though the allegations did not relate to his work for Trump, his foreign entanglements and business relationship with a man the U.S. says has ties to Russian intelligence have made him a pivotal figure in the probe.

His plea for leniency followed prosecutor Andrew Weissmann’s scathing characterization of crimes that the government said spanned more than a decade and continued even while Manafort was awaiting trial. The prosecutor said Manafort took steps to conceal his foreign lobbying work, laundered millions of dollars to fund a lavish lifestyle and then, while on house arrest, coached other witnesses to lie on his behalf.

“I believe that is not reflective of someone who has learned a harsh lesson. It is not a reflection of remorse,” Weissmann said. “It is evidence that something is wrong with sort of a moral compass, that someone in that position would choose to make that decision at that moment.”

Defense lawyer Kevin Downing suggested Manafort was being unduly punished because of the “media frenzy” generated by the appointment of a special counsel.

“That results in a very harsh process for the defendant,” Downing said.

Outside court Wednesday, Downing was shouted down by protesters and declined to comment on the new charges against Manafort.

Wednesday’s sentencing comes in a week of activity for the investigation. Mueller’s prosecutors on Tuesday night updated a judge on the status of cooperation provided by one defendant, former national security adviser Michael Flynn, and are expected to do the same later in the week for another.