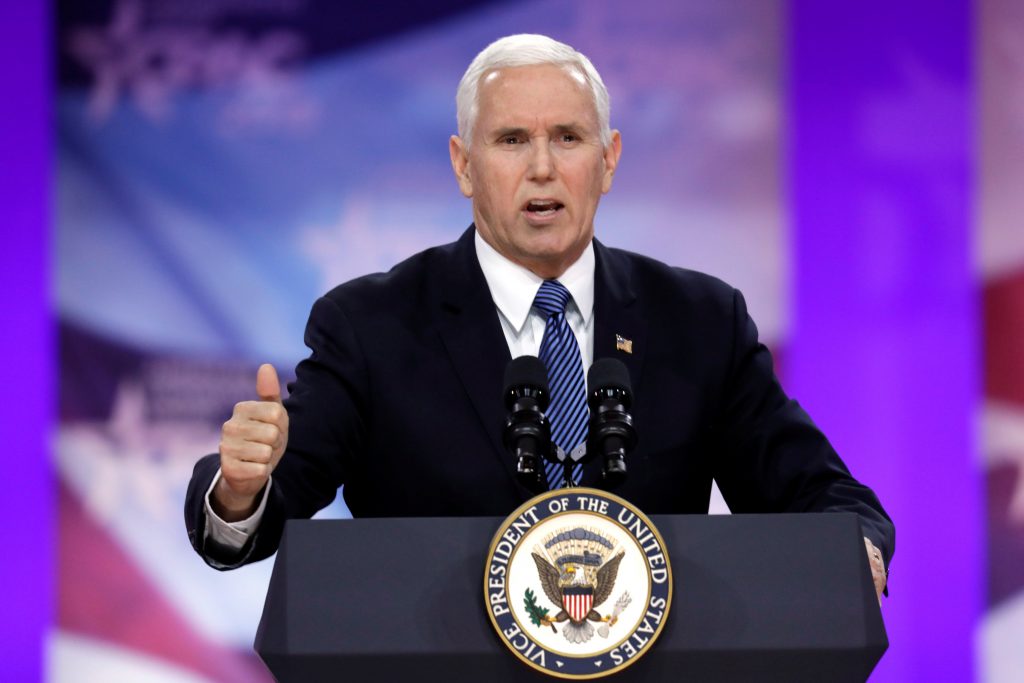 Vice President Mike Pence met privately Tuesday with Republican senators who are working on a compromise aimed at limiting GOP defections on President Donald Trump’s declaration of a national emergency at the U.S.-Mexico border.

The senators are seeking to persuade the administration to back changes to the National Emergencies Act, which they believe could give Republicans greater comfort in voting with President Trump and against a resolution nullifying his emergency declaration later this week.

Pence declined to comment as he left the Capitol. A senior administration official said Pence had heard the senators out and would take their arguments back to Trump.

One point made in the meeting was that it was possible the disapproval resolution could be defeated outright in the Senate if a deal is reached, the official said. The official spoke on the condition of anonymity to discuss the private meeting.

The lawmakers who met with Pence were GOP Sens. Thom Tillis of North Carolina, Lamar Alexander of Tennessee, Mike Lee of Utah, Rob Portman of Ohio and Patrick Toomey of Pennsylvania.

All five of these senators have indicated varying levels of concern with the president’s emergency declaration, issued Feb. 15, to reroute billions of dollars intended for military construction projects toward Trump’s southern border wall instead. Tillis, who is up for reelection next year, has already stated his outright opposition on constitutional grounds and is one of four Republican senators who plan to vote in support of a disapproval resolution of the declaration. The vote is expected Thursday.

But Tillis indicated after meeting with Pence that his position could change if a deal is reached on the National Emergencies Act. He described negotiations with the administration as a “work in progress.”

Many Senate Republicans have started to align behind Lee’s proposal, which would amend the National Emergencies Act of 1976 to say an emergency declaration would automatically expire after 30 days unless both chambers of Congress vote to approve it.

But the White House, in private, has been skeptical of the effort so far and is proposing some changes to it, according to one of the people familiar with the discussions who spoke on the condition of anonymity to discuss private deliberations. One possible way to amend it more to the White House’s liking is to make that 30-day period in Lee’s proposal longer.

The House already passed a disapproval resolution to nullify Trump’s emergency declaration. According to lawmakers and aides involved, even if Senate passage of the disapproval resolution seems assured, the White House would like to limit GOP defections to keep the vote well below the two-thirds majority that would be needed to override a Trump veto.