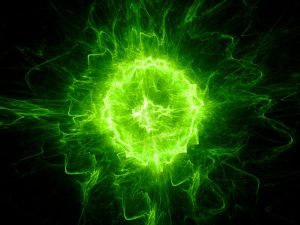 Light shows can be mesmerizing. There are big ones, like fireworks shows; but even the little ones, like fireflies, have a way of casting a captivating spell on their observers. Little more than twenty-four hours passed from the moment that Adam was created when Hashem infused him with the intelligence to create a man-made light show: fire. (Just think about the last Lag BaOmer bonfire you attended and you’ll understand why I am referring to fire as a light show.)

Now, with the advent of microwave technology, Hashem has given man the intelligence to create a new light show. Diminutive in size, but gigantic in its ability to fascinate and ignite imagination. And it emanates from something that one would have thought to be one of the least likely objects to be able to create such a light show: grapes. Yes, that’s right, grapes! Apparently, home videos of plasma-spitting grapes in microwaves have been circulating for decades, but it was only recently that scientists finally decided to “get to the bottom” of why this happens (read: observe what is going on in a more clear, precise manner. The why they can never figure out).

As reported by LiveScience and PhysicsWorld, Pablo Bianucci, an associate professor in the Department of Physics at Concordia University in Montreal, recently led an experiment wherein he and his colleagues used a modified microwave — the door was engineered to keep the radiation in, but was transparent enough to allow their 1000-frames-per-second thermal imaging camera to capture the show — to determine what exactly is going on with this grape-plasma phenomenon. And they didn’t just test grapes. They tested hydrogel beads and water-filled quail eggs too.

What they discovered is that grapes (and a number of other berrylike objects) are essentially mini water-spheres that are just the right size and composition to act as electromagnetic hot spots. The size and conditions of the grape are almost a perfect fit for the 2.4 GHz irradiating wavelength. Or, put more simply, if you imagine the energy coming out of the microwave and being zapped into the food as tiny little strings, the grape is just the right size and composition to allow those energy strings to fit almost entirely inside the cavity of the grape — like a snugly-fit glove on a hand (the scientists call them Mie resonances, but I like my name better). Because the grape is able to “trap” the electromagnetic waves, it gets intensely energized. Instead of the grape getting heated from the outside in (which is how many foods wind up heating in microwaves, to a great extent), it gets heated from the inside out.

However, that intense energization is not enough to create the light show; it is only when you cut a grape in half but leave it connected by the skin, or place two grapes next to one another so that they are touching, that the plasma party begins. The reason for this, Bianucci explains, is that when the two halves or wholes are touching, each one of them has its own intensely energized core, and the radiation begins to “hop” from one side to another. The result is a really significant hot spot — a much stronger electromagnetic field smack in the middle — that becomes like a fountain of fire, spitting and crackling out its now-ionized sodium and potassium molecules in the form of the brilliant plasma.

Now, scientists are busy discussing how this discovery could possibly bring about major advances in the field of resolution imaging and enhanced spectroscopy, but I couldn’t help but get really excited (not excited to the point of producing fiery plasma, but excited nonetheless) about the way this grape-plasma phenomenon is an amazing mashal for a well-known teaching of Chazal. Chazal tell us that even one person who learns Torah by himself will be given tremendous reward (Avos 3:6). Yet they also make it clear that if one has the opportunity to study Torah together with another person and opts to go at it solo, then the result will be very far from the desired goal (Brachos 63b). It is imperative, Chazal make abundantly clear, that wherever possible, a person should take advantage of the opportunity to study Torah with a chavrusa, a group and a Rebbi. The result is exponentially greater.

And the grape-plasma phenomenon helps us to grasp why that is. Yes, it is true that every Jew is the perfect “size and composition” for the wisdom and holiness of Torah to fit right in and generate an intense energy. But so long as he is a loner, that energy will not be able to realize its full potential. Our Torah covenant with Hashem, Harav Yaakov Weinberg, zt”l, once explained, was not to serve Him as individuals, but primarily as a unified people. A cohesive whole. We need to be in contact and united with others, with the greater whole of the Jewish nation, so that all of the Torah energy fields that each one of us is generating are able to connect with one another, synthesize and synergize into the greatest light show of all: one brilliant, cohesive fire of Torah and closeness with Hashem.

Readers are cautioned not to try the grape plasma experiment on their own.