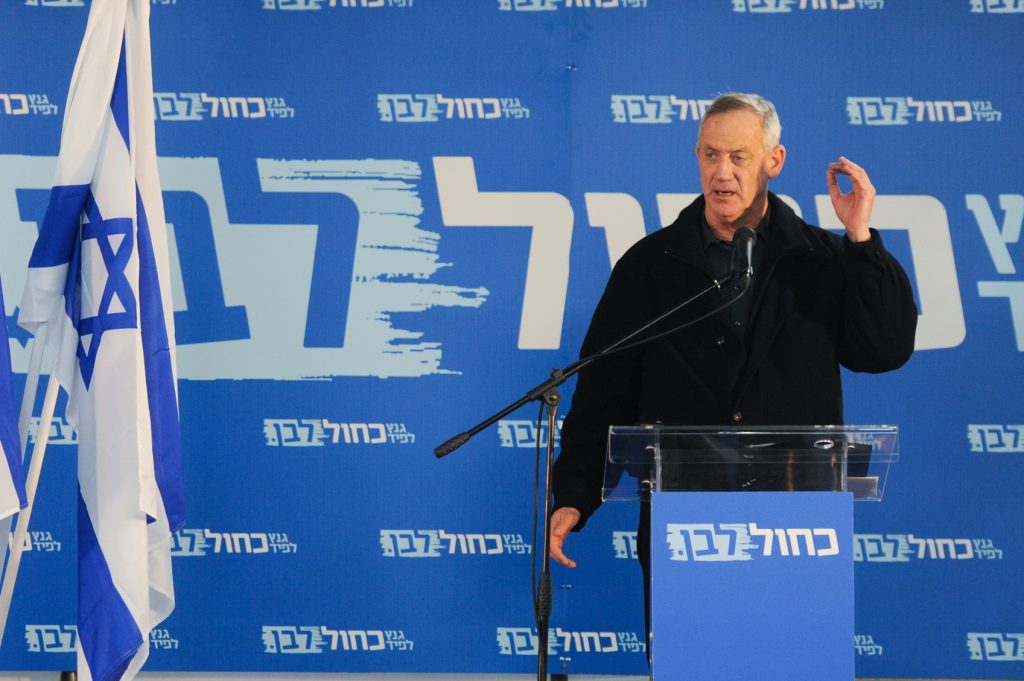 Blue and White party chairman Benny Gantz answered European diplomats with careful ambiguity regarding his position on a two-state solution to the Palestinian conflict in a meeting on Tuesday.

Gantz told the European Union ambassadors that both Israelis and Palestinians “are here to stay,” and that arrangements have to be made to accommodate both, a participant in the meeting told The Times of Israel.

But he did not go so far as to endorse a Palestinian state, which the E.U. favors. In a recent statement, Gantz said that the major Jewish communities in Yehudah and Shomron would remain part of Israel in any peace agreement, but allowed for the possibility of unilateral territorial withdrawals.

Gantz acknowledged that his policy toward Iran and its proxies would be much the same as that of Israeli Prime Minister Binyamin Netanyahu, saying they are “on the same page.”

“We won’t allow Iran to become a regional power, we will continue supporting the sidelining of its negative impact and of its efforts to undermine regional stability, and we will prevent it from developing nuclear military capabilities,” Gantz said.

“Israel cannot allow a nuclear Iran. If we can use diplomacy we will do so, but I won’t rule out other options.”

“Hamas is a gang holding two million people hostage,” he said. “Do you think if they have a maritime port, all they import will be orange juice? That they want economic development? The responsibility for the future of Gaza is in the hands of Hamas, not Israel.”

The reaction of the Europeans to Gantz, whose party currently leads Likud in the polls, was restrained.

Austria’s ambassador Martin Weiss described the discussion as “interesting” and that he was impressed by Gantz, whom he described as “cool and collected.”

One ambassador said the hour-long meeting gave them a sense of who Gantz is without much specificity on policy.

“Even if you don’t get many details, and who expects that four weeks before the elections, we did get a feeling of the man,” the ambassador said. “After talking to us for about an hour, he spoke about his family, his mother and his children – so you get a sense of who he is. And that is important.”

In contrast to Netanyahu’s frequent lambasting of the E.U., Gantz held back whatever criticism he may have. Instead, he stressed the overall strength of the relationship with Europe and displayed a knowledge of trading data.

“There was no criticism of bad Old Europe,” one ambassador remarked. “The meeting was friendly and respectful.”