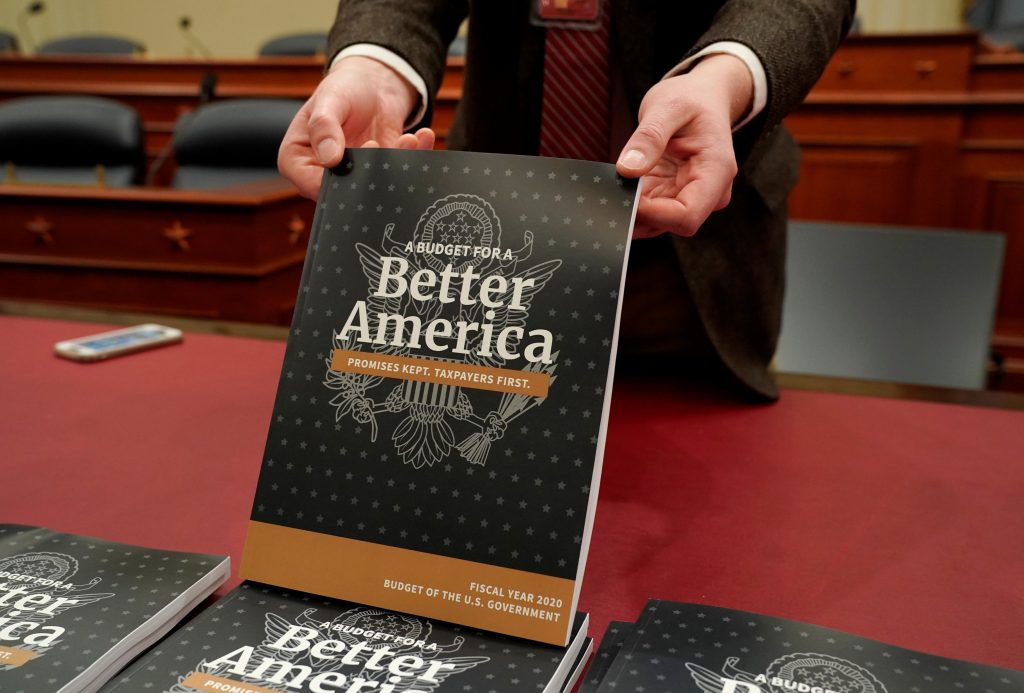 President Donald Trump proposed a $4.7 trillion budget plan Monday that stands as a sharp challenge to Congress and the Democrats trying to unseat him, the first act in a multi-front struggle over the role of government that’s set to consume Washington for the next 18 months.

The budget proposal dramatically raises the possibility of another government shutdown in October, with the inclusion of an additional $8.6 billion to build sections of a wall along the U. S.-Mexico border. President Trump’s ask for yet more wall money – beyond the spending he is seeking under a “national emergency” declaration at the border – infuriated Democrats.

The budget also calls for a significant increase in military spending, causing problems with some Republicans who are uneasy about how it is allocated. If lawmakers and Trump don’t reach a spending agreement by the end of September, many government operations will ground to a halt.

President Trump’s “Budget for a Better America” also includes dozens of spending cuts and policy overhauls that frame the early stages of the debate for the 2020 election. For example, Trump calls for cutting $845 billion from Medicare, the popular health-care program for the elderly that in the past he had largely said he would protect.

His budget would also propose a major overhaul of Medicaid, the health-care program for low-income Americans run jointly with states, by turning more power over to states. This would cut spending by $241 billion over 10 years.

Other agencies, particularly the Environmental Protection Agency, State Department, Transportation Department, and Interior Department, would see their budgets severely reduced. The Commerce Department budget would increase in preparation for the 2020 Census – but Democrats said the Census money was insufficient.

“President Trump has somehow managed to produce a budget request even more untethered from reality than his past two,” said House Appropriations Committee Chairwoman Nita Lowey, D-N.Y. “With such misguided priorities, the Trump budget has no chance of garnering the necessary bipartisan support to become law.”

“The president’s annual budget proposal is the first step in the federal budget process and will allow us to consider how his priorities align with the priorities of Congress,” said Senate Budget Committee Chairman Mike Enzi, R-Wyo. “I look forward to working with my colleagues and the president to curb federal overspending and help bring our deficits and debt under control.”

Over the next 10 years the budget would spend $56 trillion.

More broadly, Trump’s budget would impose mandatory work requirements for millions of people who receive welfare assistance while dramatically increasing the defense budget to $750 billion next year, a 5 percent increase from 2019.

Trump and other Republicans have said the federal budget is full of waste and bloat, arguing many federal agencies could still function with less taxpayer money. And though they have proposed budget cuts before, only to be rejected by Congress, the president’s top advisers want to dig in on the cuts this year, convinced Americans will support them.

Still, according to President Trump’s budget, the spending cuts would do little to reduce what is shaping up to be a colossal deficit in the next several years. The budget would spend much more money than it brings in through revenue, and that gap is called the deficit.

These deficits will add to the existing $22 trillion debt and put further strain on the budget. For example, the White House now projects the government will spend $482 billion on interest payments for the debt next year, more than the entire budget for Medicaid, which provides health-care benefits for millions of people.

Republicans have long called for taking steps that shrink – or even eliminate – the deficit, and putting forward a plan that would create $4.3 trillion in new debt over four years could give Democrats fresh targets on the campaign trail.

There is a crowded field of Democrats seeking to win their party’s primary to challenge Trump next November. While Trump has called for boosting the military, cutting taxes, and cutting the budgets of domestic agencies and social welfare programs, many of the Democrats have proposed something much different.

Several have called for raising taxes on the wealthiest Americans, expanding access to Medicare, and providing more benefits that help pay for college.

White House officials believe Trump’s economic agenda has proven very successful so far, leading to job growth, higher wages, and economic growth. But critics have alleged that he achieved this in part through huge levels of fiscal stimulus, including tax cuts and spending increases, that have widened the deficit and adding several trillion dollars to the government’s debt.

Administration officials say the southern border wall funding request would allow them to complete 722 miles of barriers along the southern border, the full amount they have identified as necessary – thereby making good on Trump’s core campaign promise, although he long claimed Mexico would pay for the wall.

The budget does reflect the changing nature of Trump’s agenda since taking office.

He has continued to try to pump more money into the military and border security programs, and the budget provides funding for the creation of a “Space Force,” and a U.S. Space Command, ideas Trump has personally pushed even while running into some resistance from military leaders and congressional Republicans.

Senate Appropriations Chairman Richard Shelby, R-Ala., said last week that he’s skeptical about the need to create a new branch of the military to deal with space.

And despite Trump’s decision to slash spending for most Cabinet agencies, his budget makes room for priorities embraced by his daughter Ivanka Trump. It includes a provision supporting state paid family leave programs, and allocates money for her recently launched Women’s Global Development and Prosperity Initiative, an effort to help women in the workforce succeed as entrepreneurs.

While his Democratic rivals for the White House next year ramp up their attacks on his policy agenda, Democrats in Congress are planning to challenge him in the coming months on his budget plan. In addition to the Sept. 30, 2019 deadline to reach a spending agreement, lawmakers believe they will also need to reach an agreement to raise the debt ceiling around that time.

The debt ceiling is a borrowing cap established by Congress, and it prohibits the Treasury Department from issuing more debt. The government is bumping up against the debt limit now, and the Treasury Department has begun emergency steps to buy more time so Congress can eventually vote to raise it. Several lawmakers have said they expect the debt ceiling to be raised as part of a broader budget deal this summer or fall.

But if budget talks bog down later this year amid a fight over border wall funding, it could force lawmakers to rethink this timeline and their entire approach.