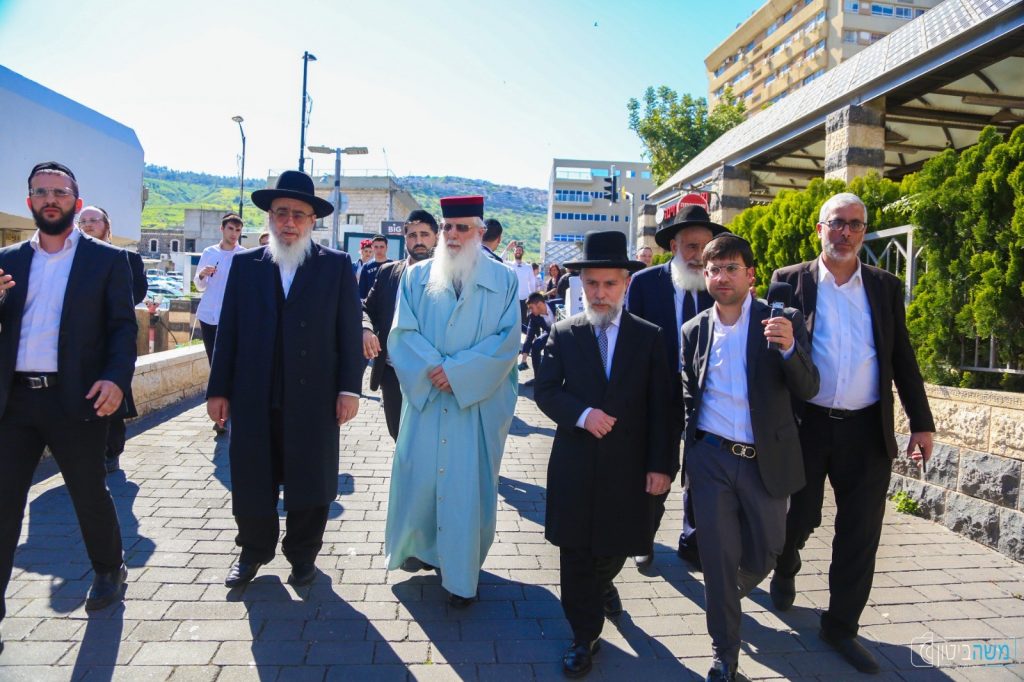 Five store owners in Teveria who until now were open on Shabbos have begun to observe Shabbos, and another 3,000 locals promised to strengthen their shemiras Shabbos, during the Rabbanim’s Shemiras Shabbos tour in the city organized by Hidabroot.

The Rabbanim visited many stores during their Friday visit, and every store owner who closes his store on Shabbos received an elegant certificate, signed by Gedolei Yisrael.

In addition to those who already close their stores every Shabbos, there were five store owners, who, during the visit, agreed to accept on themselves shemiras Shabbos and to close their stores. They received special certificates, and the Rabbanim wrote down their names for brachos from Gedolei Yisrael.

During the tour, the locals broke out in dance with the Rabbanim, singing “Ki Eshmera Shabbat Kel yishmereini, When I keep Shabbos Hashem will protect me,” as many shed tears of emotion.

The tour was broadcast live, and over 3,000 Teveria locals called up promising to strengthen their shemiras Shabbos.

Harav Cohen said at the end of the visit: “We must thank Hashem for the merit to sanctify Shabbos in the holy city of Teveria.

“It was moving to see the businessmen on the city’s promenade, for whom this chizuk was most needed. Some of them spoke about the pressure being exerted on them by the municipality to open on Shabbos, and now they received the strength to continue their shemiras Shabbos.

“The most joyful part was to hear a number of store owners who until now had been open on Shabbos, and have now accepted on themselves to be closed on Shabbos.

Hidabroot conducted an unprecedented publicity campaign in the city to increase respect for Shabbos, including billboards in central locations with the message “Shabbat of Shalom arrives in Teveria” and details of the shiurei Torah to be delivered on Shabbos.

In addition, tens of thousands of Shemiras Shabbos kits were distributed in the city, and thousands of street posters were hung, inviting the public to over 30 shiurei Torah that were delivered by Hidabroot maggidei shiur during the Shabbos.

Rabbi Cohen emphasized that the chizuk in shemiras Shabbos was an opening shot for the organization’s broad outreach activities in the city. He suggested that the shomrei Shabbos residents serve as “Shabbos ambassadors,” and bring more Jews closer to the world of Torah and to keeping Shabbos.

He added that in light of the tremendous success of the Shabbos in Teveria, Hidabroot will formulate a comprehensive plan to expand the activity to other cities where chizuk is needed to preserve shemiras Shabbos.