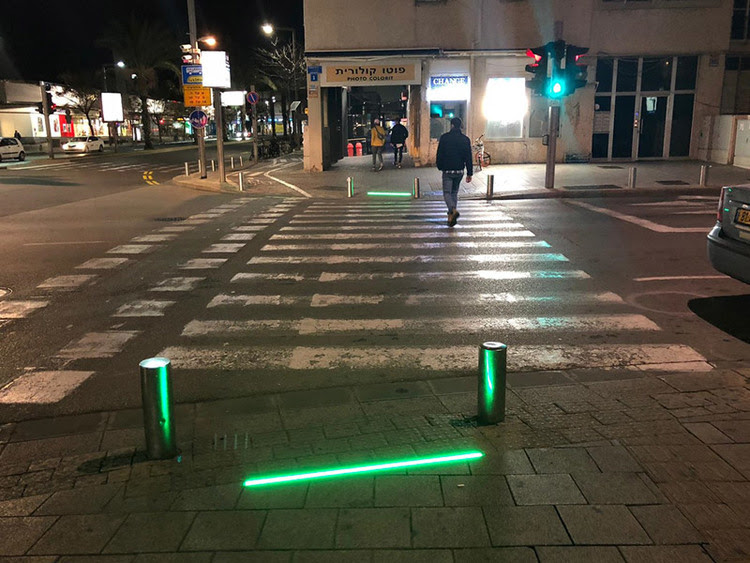 The city of Tel Aviv is experimenting with pavement lights that will be coordinated with traffic lights for the safety of texting pedestrians who are otherwise oblivious to the hazards of crossing the street.

“The Tel Aviv-Yafo Municipality installed the country’s first LED light strips at a pedestrian crossing. Strips of LEDs connected to existing traffic lights have been installed at the pavement edge and change colors at the same time as their eye-level counterparts. The floor lighting is designed to warn texting pedestrians, who walk without paying attention to their surroundings as they are focus on their mobile phones,” the city said in a statement.

The first set of pavement lights have been located on either side of the intersection of Ibn Gabirol and David Bloch Street, opposite the Tel Aviv-Yafo Municipality.

If successful, the city says it will expand the program.

Tel Aviv isn’t the first city to try out the idea. Similar devices and warning signs have been installed in cities in several European countries, Singapore and Australia over the past few years.

The change comes in recognition of the dangers that accompany the use of mobile devices. According to a U.S. Governors Highway Safety Association report last year, one key factor behind the marked increase in pedestrian casualties across the country was “the dramatic growth in smartphone use.”

Some municipal authorities take a less tolerant view of the phenomenon. In Honolulu and the Chinese city of Wenzhou, for example, pedestrians caught watching their phones while crossing the street face fines of up to $99 and ¥10 (about $1.50) respectively.