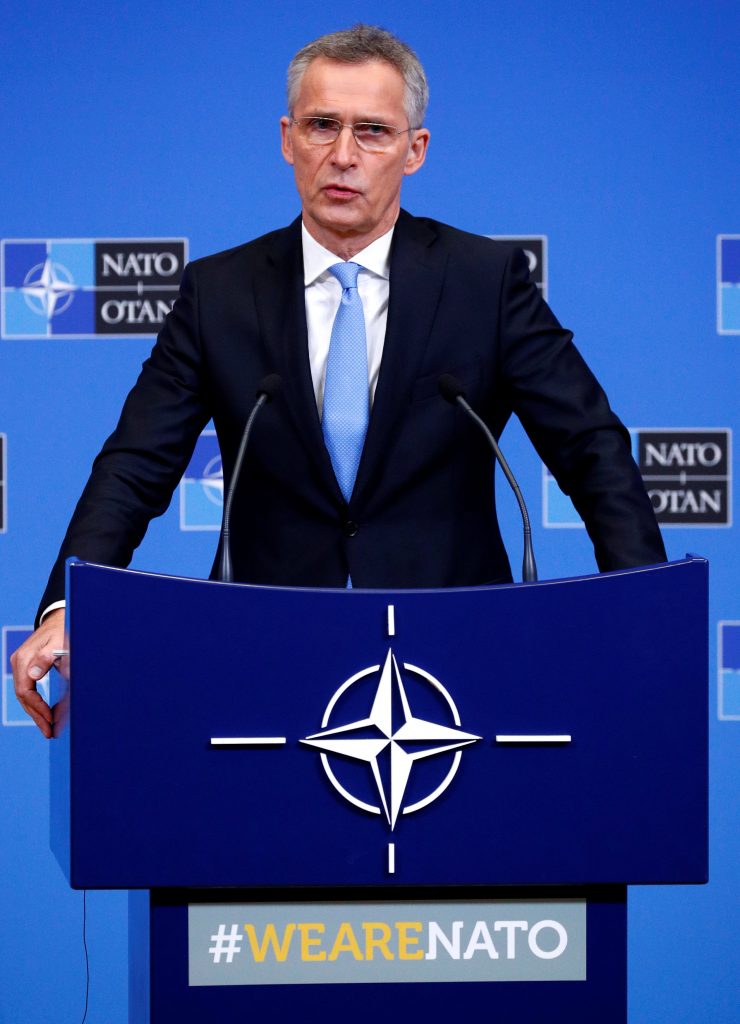 McConnell and Pelosi had held quiet talks about the idea of an invitation to Jens Stoltenberg as they eye ways to honor NATO as it celebrates its 70th anniversary in April and underscore the U.S. commitment to the group’s values and importance in securing global order, according to three people familiar with the discussions who were not authorized to speak publicly.

The invitation to Stoltenberg comes as President Donald Trump’s nationalistic foreign policy has rattled U.S. allies and NATO members – and as he has pushed them to pay more for U.S. military protection and framed the alliance in transactional terms.

In particular, President Trump has told his aides in recent weeks that he has devised an eye-popping new formula for U.S. allies, including NATO countries, although he has not implemented it.

Under his proposal, countries would pay the full cost of stationing American troops on their territory, plus 50 percent more, according to U.S. and foreign officials familiar with the idea, which could have allies contributing five times what they provide.

President Trump calls the formula “cost plus 50,” and it has struck fear in the hearts of U.S. allies who view it as extortionate.

Republicans such as Rep. Liz Cheney, R-Wyo., a member of GOP leadership and a hawk, have criticized the suggestion. “It would be absolutely devastating,” Cheney said Sunday on NBC’s “Meet the Press.”

“It’s going to be very important for us to make sure that people understand the danger that will do to our relationships and to our fundamental security,” Cheney said. “Our security, we’ve been able to protect it because of our alliances and because we have been able to work with countries. We should not look at this that we need to charge them rent for the privilege of having our forces there.”

President Trump is personally friendly with Stoltenberg and has praised him, making frequent comments about the former Norwegian prime minister’s efforts to increase members’ financial contributions for U.S. military operations. And even as many European leaders cringe at President Trump, Stoltenberg has strained to give him credit for shaking up negotiations over NATO finances and the U.S. military’s support.

“Why was that last year?” Trump asked.

“Because of your leadership, because of your carried message,” Stoltenberg told him. President Trump then quipped that reporters “won’t write that, but that’s okay.”

McConnell has been a defender of NATO and has split with Trump over the president’s skepticism of the alliance, beginning with then-candidate Trump’s assertion during his 2016 presidential campaign that he wouldn’t automatically come to the defense of NATO alliances if they were attacked.

The majority leader has also aligned himself with former defense secretary Jim Mattis when he abruptly resigned in December, urging President Trump to nominate a successor who shared Mattis’s support for global alliances.

The Democratic-controlled House, led by Pelosi, passed legislation in January affirming its support for NATO. The Senate passed a similar measure last July ahead of President Trump’s trip to the annual NATO summit in Brussels.

In addition, Pelosi led a congressional delegation to Brussels in mid-February, where she and her colleagues met with NATO leaders, including Stoltenberg.

During the visit, Pelosi said she was asked repeatedly by NATO and European officials about whether the United States was having second thoughts about its membership given reports that President Trump repeatedly floated withdrawing from the alliance. She promised them the U.S. was not considering an exit, arguing that President Trump controlled only one branch of the U.S. government and that NATO had bipartisan support despite the president’s remarks.

“Over 50 members of Congress were there – House and Senate, Democrats and Republicans – reasserting our commitment to the transatlantic relationship between the U.S. and Europe, as well as our commitment to NATO to strengthen it,” Pelosi said following the trip. “People seemed very happy to see such bipartisanship, House and Senate, with a very positive message of the importance of that region to us.”

While President Trump has repeatedly groused about NATO members’ financial contributions, his administration has worked to balance out those statements with overtures and reassurances from others. Trump broke with past U.S. presidents by omitting a pledge to common defense from his first address to NATO leaders in 2017.

Speaking last month in Poland, Vice President Mike Pence highlighted the administration’s commitment to the NATO alliance and its core mission of a united front against Russia on Wednesday, with a caveat that American interests will always come first.

“The United States of America stands with Poland in the most successful mutual-defense alliance in the history of the world – an alliance that each of you serves to uphold and defend – the North Atlantic Treaty Organization,” Pence said. “Under President Trump, the United States will always put the security and prosperity of America first. But as the president has made clear – and as all of you prove every single day – America first does not mean America alone.”