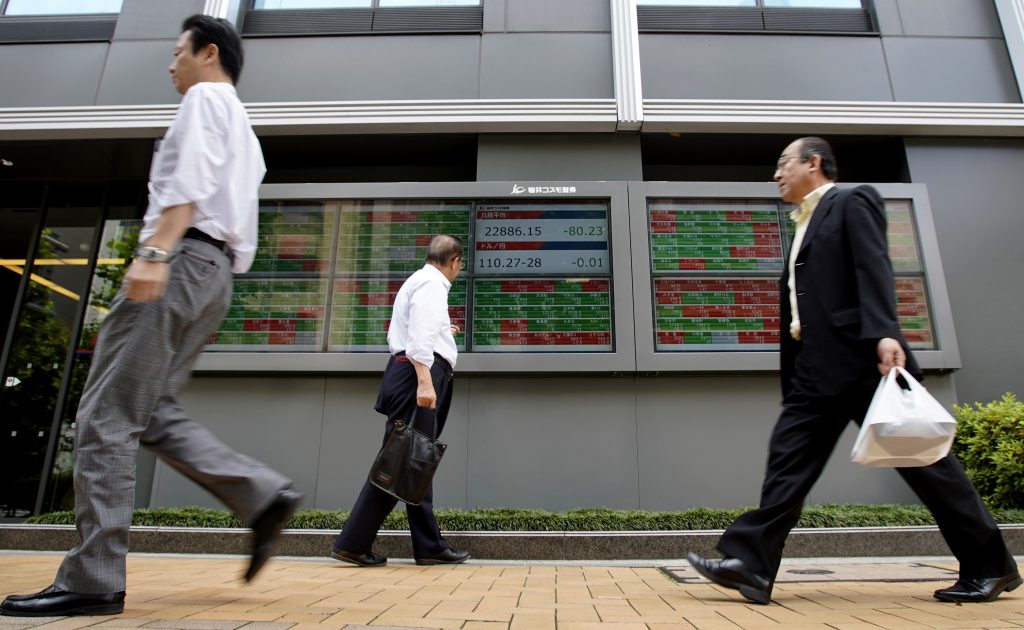 Asian shares inched up on Monday as Chinese markets rebounded on hopes of more policy support for the slowing economy, but surprisingly weak U.S. employment data raised doubts about the strength of the global economy and limited gains.

China’s blue-chip CSI300 index gained 1.3 percent after Friday’s 4.0-percent fall, which was triggered after CITIC Securities issued a rare “sell” rating on a major insurer and by a clampdown on grey-market, margin financing.

Chinese data released over the weekend was slightly weaker than expected, though hopes for more policy easing are likely to cushion any blows.

New bank loans in China fell a bit more than expected in February from a record the previous month, while money supply growth also missed forecasts.

India’s NSE index rose 1.0 percent, and hit near six-month highs after a general election was set to start on April 11, raising hopes that Prime Minister Narendra Modi is likely to benefit from tensions with Pakistan.

Wall Street’s main indexes posted their biggest weekly decline since the market tumbled at the end of 2018 last week, falling for the fifth consecutive day on Friday on the shocking payrolls data.

The U.S. economy created only 20,000 jobs in February, the weakest reading since September 2017. As a result, bond yields dropped, with the 10-year Treasuries yield hitting a two-month low of 2.607 percent. It last stood at 2.638 percent.

The two-year yield also hit a two-month low of 2.438 percent, edging near the current Fed funds rate around 2.40 percent.

Fed funds futures are pricing in a more than 20-percent chance of a rate cut this year.

“The headline reading was so weak that the market could have reacted more aggressively. I would say markets reacted relatively calmly because there were elements that suggest weakness is temporary,” said Tomoaki Shishido, fixed income strategist at Nomura Securities.

While job growth was weak, average hourly earnings rose 11 cents, or 0.4 percent, raising the annual increase to 3.4 percent, the biggest gain since April 2009.

Retail sales figures for January due at 1230 GMT are a key focus, given that the December reading was surprisingly weak.

Fed Chair Jerome Powell said on Friday that the central bank will be careful not to shock financial markets as it stabilizes its bond portfolio, saying that it does not see problems in the U.S. economy that warrant an immediate change in its policy.

He also said the new normal for the Fed’s total liabilities may be in the ballpark of 16.5 percent of GDP. Many market players now expect the Fed to unveil a plan to end its balance sheet runoff as early as next week.

Investors are cautiously optimistic that Washington and Beijing will hammer out a deal to eliminate tariffs. A senior Chinese official said on Saturday China and the United States are still working day and night to achieve a trade deal.

Yet doubts are creeping in as there is no clarity on when the leaders from the two countries can meet to seal any deals.

In the currency market, the euro stood little changed at $1.1238, keeping some distance from Thursday’s $1.11765 hit after the European Central Bank’s surprisingly dovish stance. It was its lowest since late June 2017.

It had fallen to a three-week low of $1.2945 earlier on Monday on nervousness ahead of a crucial week in the UK’s troubled political debate over EU membership, with Parliament expected to reject Prime Minister Theresa May’s deal in a vote on Tuesday.

If that happens, lawmakers will vote the next day on whether to leave without a deal on March 29. If they reject that, then on Thursday they are due to vote on a “limited” delay.

Oil prices rose on comments from Saudi oil minister Khalid al-Falih that an end to OPEC-led supply cuts was unlikely before June and on a report of falling U.S. drilling activity.