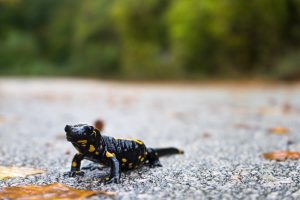 Volunteers in the Hudson Valley are preparing to document the annual breeding migrations of frogs and salamanders in a project led by the Department of Environmental Conservation.

DEC Commissioner Basil Seggos is encouraging drivers across New York to watch out for amphibians crossing roads as the temperature rises and the ground thaws.

The breeding migration of salamanders and frogs typically begins in mid-March and large numbers may cross roads in wetland areas on rainy nights with temperatures in the 40s.