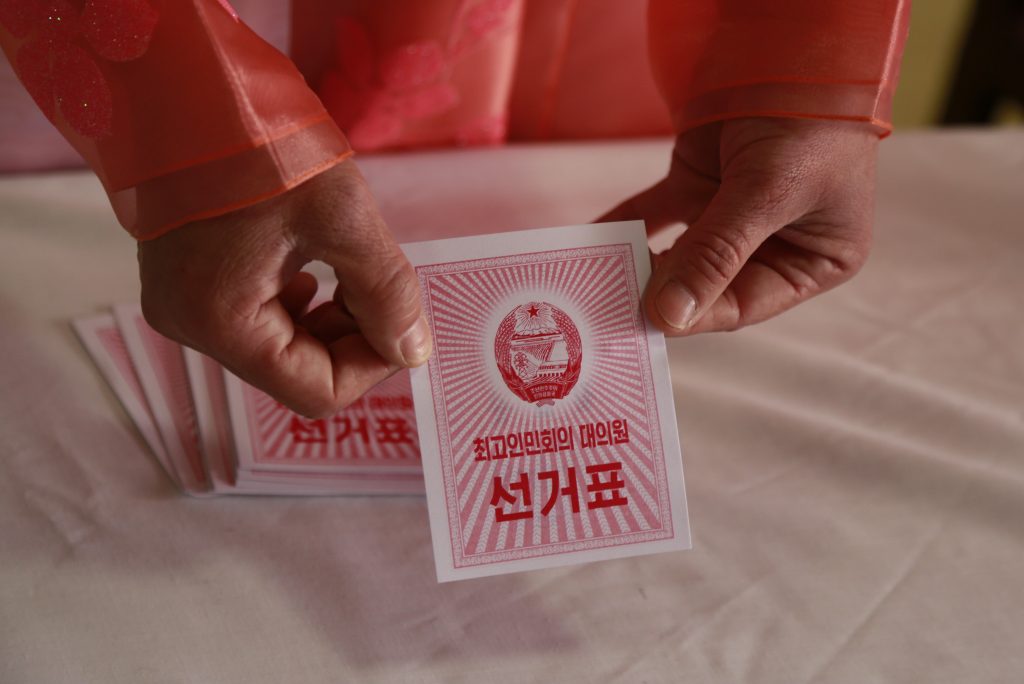 Millions of North Korean voters, including leader Kim Jong Un, went to the polls on Sunday to elect a new lineup of roughly 700 members for the next session of the national legislature, though the vote was more of an endorsement than a competitive contest.

Voters were presented with just one state-sanctioned candidate per seat and cast their ballots not to select but rather to show their approval or, at least theoretically, disapproval of that candidate.

The elections, last held in 2014, are for the entire Supreme People’s Assembly, which on paper is the highest organ of power in North Korea. Its delegates come from all over the country and all walks of life. The candidates are selected by the ruling Korean Workers’ Party and a couple of other smaller coalition parties that have seats in the assembly.

Kim, fresh off his trip to Hanoi for his second summit with President Donald Trump, is a member of the assembly, though his power rests in his complete control over the ruling party, government and military. State media showed footage of him casting his vote at a polling center at Pyongyang’s Kim Chaek University of Technology.

As was the custom in the Soviet Union and other communist countries, turnout is generally reported at 99 percent or higher. Voting is generally regarded as a duty and responsibility. Simply staying at home is not an option.

Under North Korean law, citizens can vote from the age of 17.

Voting begins at around 10 a.m. depending on the location and continues until late evening. Voters show election officials their ID cards to receive their ballot with the sole candidate’s name on it, which they cast in a private booth. If they approve, they simply put the ballot in the box. If they don’t approve, they cross the name out and put it in the same box.

But one official told The AP that basically never happens.

“No one votes against the candidate,” said Jin Ki Chol, the chairman of an election committee supervising a polling station at a cable factory in central Pyongyang.

Election days have a festive mood. Bands play music as voters wait in line, and there is group dancing for those who have already finished.

“The election will strikingly manifest the fixed will of our people to firmly trust and uphold the last Supreme Leader Kim Jong Un despite storm and stress,” the ruling party’s official daily said in a commentary Sunday.

The number of deputies in the assembly is based on population — each represents from 30,000-35,000 people.

Officials at two polling stations visited by The AP said they were not sure of the exact number this year, or when the results would be announced. Five years ago, 687 deputies were elected and the results, despite being a foregone conclusion, were announced two days after the vote.

The elections are decidedly not intended to foster policy debates among the general populace or for the voters to change the nation’s course from the bottom up.

But for the authorities, they provide a veneer of democracy and a means of monitoring the whereabouts and loyalties of citizens. Being chosen for the assembly is a big honor, so the elections are also an important means for the regime to reward up-and-coming cadres and replace incumbents who have already served their usefulness.

Like the elections, the legislature is quite different from what is normally seen in democracies.

The deputies to the assembly generally meet just once or sometimes twice a year, usually in March or April, to approve policies already hashed out by the ruling party, which is headed by Kim. A much smaller group — the presidium of the assembly — meets more often and is more closely involved in the actual functions of the government.

“As a deputy my main job is to take care of problems that come up with my constituents, like water problems or food,” said Jo Kil Nyo, a candidate who was put up for re-election. “If I can’t resolve something, I take it to the assembly.”