Business AUTO REVIEW: 2020 Soul Is the Best of the Cute ‘Utes’
Business 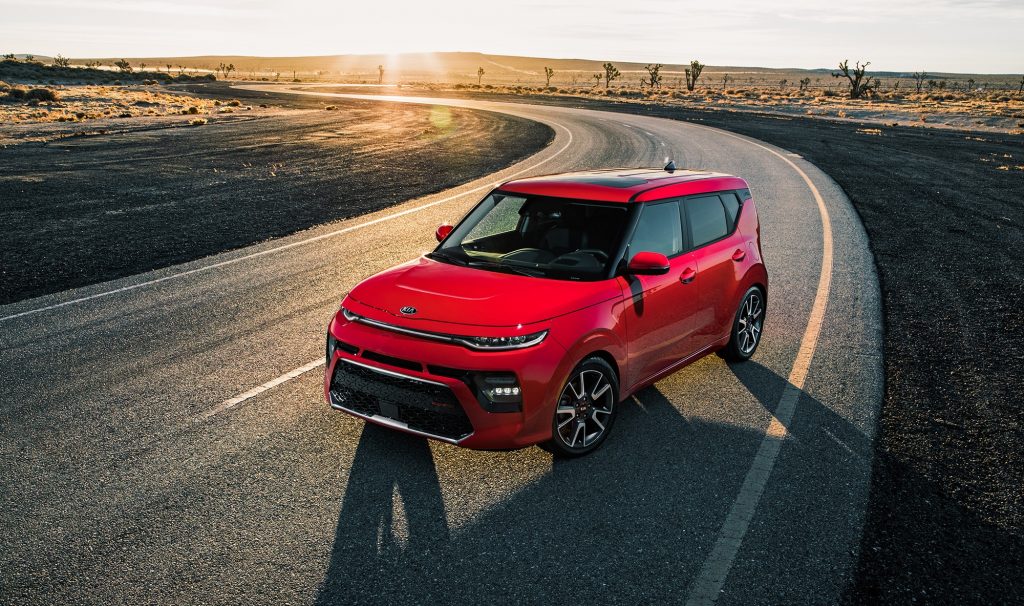 We’re told by automakers that millennials would rather cycle, scooter, or take the bus than own a car.

The reality is far different: they can’t afford a car — new or used. Once they can, millennials opt for something fun, something that enhances their life. It must have room for friends, family and lifestyle debris. It must be able to travel to who knows where to do who knows what.

And not only must it have an audio system loud enough to inflict hearing loss, it must also be reliable, easy on gas, cheap to insure and visually compelling. And it helps if it looks vaguely like a crossover SUV that’s been left in the dryer too long. In essence, a cute ute.

The Japanese-market Toyota bB, sold stateside as the 2003-2006 Scion xB, established this class, joined shortly thereafter by the ugly and ungainly 2003-2011 Honda Element, the distinctly odd 2009-2014 Nissan Cube, the over-caffeinated 2011-2017 Nissan Juke and — of course — the ever-funky Kia Soul, introduced in 2010 in advertising featuring human-sized hip-hop hamsters, a fairly disturbing thought once you think about it.

Marketed as unambiguous boxes of hipness, these reasonably priced vehicles resembled mobile toasters designed with an unexpected impudence. But as the sale rack at H&M proves, fast fashion possesses the lifespan of a lightning bug in September. Of the boxes mentioned, only the Kia Soul remains, now competing against a host of less compelling and far more conventional entry-level adversaries, including the Nissan Kicks, Honda HR-V, Ford Eco-Sport, Toyota CH-R, Jeep Renegade, Mazda CX-3 and Chevrolet Trax among others.

But the Kia Soul endures.

It’s the vehicle that endowed Kia with a personality that its identical corporate cousin lacks. Credit design honcho Peter Schreyer and his staff for making Kia something more than brand for those with thin wallets. Sure, you might flip burgers for a living, but you don’t want to be constantly reminded of the fact.

And the 2020 Soul is the best of the mainstream cute ute breed.

While the second-generation Soul, introduced for 2014, didn’t stray far from the corporate Habitrail, the 2020 model plays the same melody in a different key. Its looks are fresh, yet it retains the attitude of previous models without slavishly mimicking them. Its overall stance and shape remain the same, taking its inspiration from a boar with a backpack, according to Kia’s PR minions. This means a rounded box with slab sides and a snub nose, accentuated by new renditions of Kia’s trademark tiger-nose grille. Squinty lighting now crowns the front end.

Out back, the styling still features the appearance of a colored panel floating in the tailgate, except it’s now framed by wider wraparound taillights. The only sour note in its styling is the bit of black plastic on the rear roof pillar that lends the illusion of a “floating roof.” This odd idea has become a modern-day styling cliche, a generic bit of laziness that adds nothing to this car’s styling moxie. Yet overall, the 2020 Soul finally eschews its cheeky but cheap looks, managing to look costlier than it really is.

The new wardrobe lends it a larger look. And while its wheelbase grows 1.2 inches, and overall length expands 2.2 inches, width remains unchanged. This allows for a spacious cabin, with a commanding seating position, particularly in the rear seat. As before, headroom is impressive — so if you have a bouffant hairdo, this is your ride. There’s also a generous 24.2 cubic foot cargo hold that expands to 62.1 cubic feet with the rear seats folded.

The Soul’s interior ambience is about what you’d expect for the price. There are soft touch points just where you’d want them. As before, interior accent lighting can be set to pulse with the audio system’s music, although now the lighting has been added to the door handles and speaker grilles. Sweet.

A 7.0-inch infotainment touchscreen is standard and includes Bluetooth, Android Auto and Apple CarPlay. Spendier EX and GT models have a 10.3-inch display providing space for up to 10 apps. Tucked ahead of the transmission shifter is a small space with 12-volt outlets and USB ports. You can add Qi wireless charging to it, making it the perfect place to recharge wireless devices. Kia also offers a head-up display that projects crucial information, such as speed, onto a pop-up panel that pops out on top of the instrument cluster.

That said, deciding on a model has become more complicated now that Kia offers the Soul in double the number of trim levels for 2020, including LX, S, GT-Line, X-Line, EX and GT-Line Turbo.

Except for the GT-Line Turbo, an Atkinson-cycle 2.0-liter four-cylinder engine with 147 horsepower and 132 pound-feet of torque is standard. It’s mated to a continuously variable automatic transmission, although a six-speed dual clutch transmission is available on base LX models. Top-shelf GT-Line Turbos get a turbocharged 1.6-liter four-cylinder and seven-speed dual-clutch automatic transmission that generates 201 horsepower and 195 pound-feet of torque. Front-wheel drive is standard; all-wheel drive is not offered.

Most buyers will be satisfied with the performance of the base 2.0-liter engine, which furnishes enough power, only becoming a little winded on hills — although the transmission makes up for it. The transmission shifts unobtrusively, and never allows the engine to rev too high, like many continuously variable transmissions. It will also imitate a conventional six-speed automatic, although this seems more gimmicky than helpful. Enthusiasts should consider the GT-Line Turbo. Its extra horsepower and dual-clutch gearbox delivers more fun, even if it suffers from a bit of turbo lag.

Regardless of which model you choose, you’ll find that it’s not ultimate power that makes the Soul so impressive, it’s the vehicle’s nuance and poise. Easy to drive smoothly, it remains poised without undue body motions, thanks to excellent bump absorption and body lean that’s held in check while cornering. The numb steering is nicely weighted and precise, and brakes are light in feel but progressive in action. Even with the base powertrain, there’s little to no road or tire noise, let alone engine noise.

There are luxury crossovers that don’t behave this well. It’s a superlative performance, one that was once unthinkable in a Kia. Credit R&D chief Albert Biermann, who formerly ran BMW’s M performance division. Biermann, who oversaw this car’s engineering, has brought his touch to a number of Kia products, including the new Stinger and K900.

Its performance is a transformative trait, one that makes the Kia Soul more than a one-trick hamster. It’s a superb entry-level subcompact crossover, one with the features and athleticism that belie its price. And as a design statement, it smartly stands apart at a price that won’t break the bank.