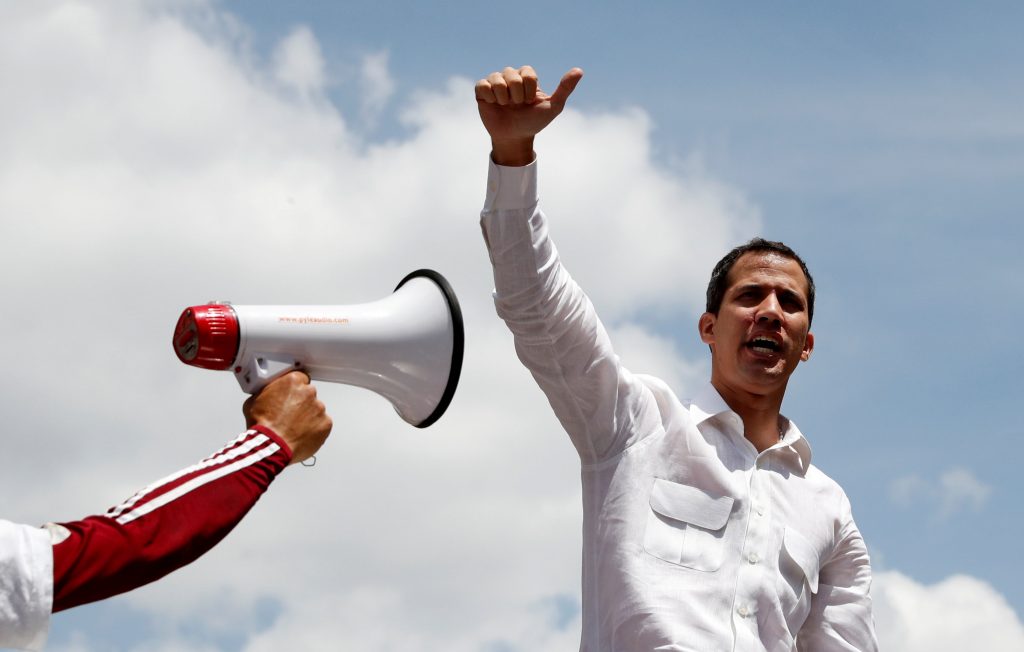 Venezuelan opposition leader Juan Guaido on Saturday called on citizens across the country to travel to the capital, Caracas, for a protest against socialist President Nicolas Maduro, as the country’s worst blackout in decades dragged on for a third day.

Addressing supporters while standing atop a bridge in Caracas, Guaido – the leader of the opposition-run congress who invoked the constitution to assume an interim presidency in January – said Maduro’s government “has no way to solve the electricity crisis that they themselves created.”

“All of Venezuela, to Caracas!” Guaido yelled while standing atop a bridge in southwestern Caracas, without saying when the planned protest would be held. “The days ahead will be difficult, thanks to the regime.”

Activists had earlier scuffled with police and troops ahead of the rally, meant to pressure Maduro amid the blackout, which the governing Socialist Party called an act of U.S.-sponsored sabotage but opposition critics derided as the result of two decades of mismanagement and corruption.

Dozens of demonstrators attempted to walk along an avenue in Caracas but were moved onto the sidewalk by police in riot gear, leading them to shout at the officers and push on their riot shields. One woman was sprayed with pepper spray, according to a local broadcaster.

Much of the country remained without power on Saturday morning, including the presidential palace of Miraflores, which was running on backup power generators, according to Reuters witnesses.

The Socialist Party has called for a competing march to protest what it calls imperialism by the United States, which has levied crippling oil sanctions on Maduro’s government in efforts to cut off its sources of funding.

Several hundred people gathered in central Caracas for a march to denounce U.S. pressure on Venezuela, which the president says is the cause of the country’s economic situation.

The power flickered on and off in parts of Caracas on Saturday morning. Six of the country’s 23 states still lacked power as of Saturday afternoon, Socialist Party Vice President Diosdado Cabello said on state media.

Julio Castro, a doctor who heads a non-government organization called Doctors For Health, said via Twitter that a total of 13 people had died amid the blackout, including nine deaths in emergency rooms.

Venezuela, already suffering from hyperinflation and shortages of basic goods, has been mired in a major political crisis since Guaido assumed the interim presidency in January, calling Maduro a usurper following the 2018 election, which Maduro won but was widely considered fraudulent.

Maduro says Guaido is a puppet of Washington and dismisses his claim to the presidency as an effort by the administration of President Donald Trump to control Venezuela’s oil wealth.

Former mayor and exiled opposition activist Antonio Ledezma on Saturday called on Guaido to seek United Nations intervention in Venezuela by invoking a principle known as “responsibility to protect.”

The U.N. doctrine, sometimes referred to as R2P, was created to prevent mass killings such as those of Rwanda and Bosnia and places the onus on the international community to protect populations from crimes against humanity and ethnic cleansing.

Trump has said that a “military option” is on the table with regard to Venezuela.

But Guaido has avoided discussion of any foreign troops in Venezuela, and Latin American neighbors have emphatically opposed a U.S. intervention as a way of addressing the situation.