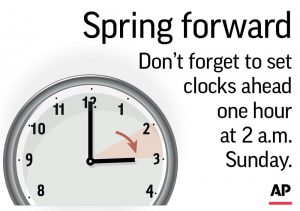 The trade-off: gaining more evening light in the months ahead.

The government expanded daylight saving time in 2005 in an effort to save energy. It now begins on the second Sunday in March and continues until the first Sunday in November.

Meanwhile, a committee at the European Parliament last week approved scrapping the twice-yearly clock change in the European Union – but with a two-year delay to 2021.

Last year, European Commission President Jean-Claude Juncker kicked off the debate with his proposal to halt the decades-old practice of daylight savings time in 2019, garnering support from about 3.8 million Europeans.

A majority of lawmakers on the European Parliament’s transport and tourism committee backed the Commission’s proposal.

The plenary will now have to approve the proposal, after which lawmakers will have to thrash out a common position with EU countries.