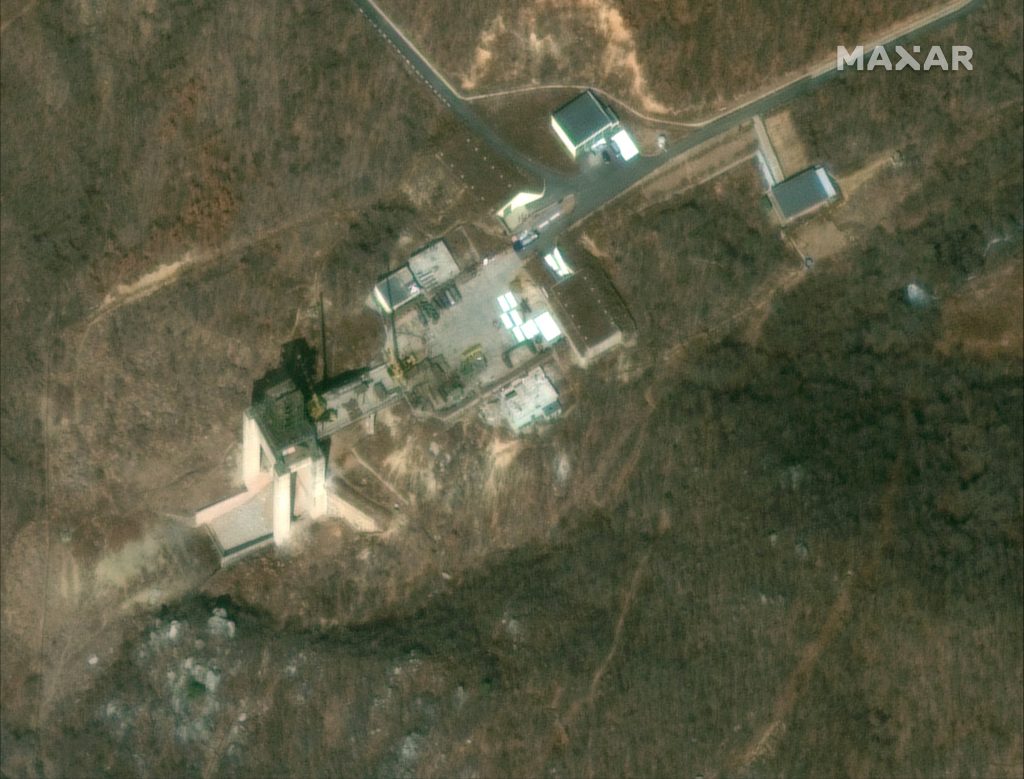 South Korea’s military said Thursday it is carefully monitoring North Korean nuclear and missile facilities after the country’s spy agency told lawmakers that new activity was detected at a research center where the North is believed to build long-range missiles targeting the U.S. mainland.

Defense Ministry spokeswoman Choi Hyun-soo said the U.S. and South Korean militaries are closely coordinating intelligence over the developments at the North’s missile research center in Sanumdong on the outskirts of the capital, Pyongyang, and also at a separate long-range rocket site. She did not elaborate on what the developments were.

A lawmaker who attended a closed-door intelligence briefing told The Associated Press that National Intelligence Service director Suh Hoon said his agency had monitored increased vehicle movement at the Sanumdong facility. Suh said in the briefing Tuesday that vehicles were transporting supplies, but avoided specific answers when lawmakers pressed him on what they were for, the lawmaker said. The lawmaker requested anonymity because the information was sensitive.

Suh also told lawmakers that North Korea is restoring facilities at a rocket launch site in Tongchang-ri that it partially dismantled last year as part of disarmament steps, an assessment supported by private U.S. reports based on satellite imagery. While the NIS believes North Korea has not produced plutonium for nuclear weapons in months, signs of uranium use have been seen at an enrichment facility at North Korea’s main nuclear complex in Yongbyon, the lawmaker said. The International Atomic Energy Agency provided a similar estimation in a recent report.

The revelations follow the collapse of talks in Vietnam last week between North Korean leader Kim Jong Un and President Donald Trump over what the Americans said were excessive North Korean demands for sanctions relief in exchange for a limited offer to partially shutter the Yongbyon site.

It wasn’t immediately clear how the findings might affect nuclear negotiations. The United States and North Korea accused each other of causing the breakdown of the talks in Vietnam, but both sides left the door open for future negotiations.

Some analysts said North Korea is apparently trying to convey displeasure over the summit’s failure by creating an impression that it could resume missile or rocket tests. That would put pressure on Washington and Seoul, which has acted as a mediator, to make a deal, they said.

Kim said in a New Year’s address that he was committed to his high-stakes summitry with Trump, but also warned he may need to pursue a “new way” if the United States continues to insist on unilateral demands and sanctions. After the Vietnam summit collapsed, North Korean diplomat Choe Sun Hui told reporters that Kim “might lose his willingness” to continue nuclear negotiations.

Moon Seong Mook, an analyst for the Seoul-based Korea Research Institute for National Strategy, said it’s unlikely that North Korea will resume major missile tests or satellite launches anytime soon because that would risk destroying its fragile negotiations with Washington and could bring even harsher sanctions on its crippled economy.

He said North Korea will also want to see if South Korea will support its position more strongly. Undeterred by the breakdown of the talks in Vietnam, South Korea has continued to urge the United States to ease sanctions on North Korea to allow a resumption of inter-Korean economic projects and encourage more disarmament steps from the North.

When asked about the reports about work at the Tongchang-ri site, Trump told reporters at the White House he would be “very, very disappointed in Chairman Kim” if that were happening. He also said it was “a very early report” and that “we’ll see what happens. We’ll take a look. It will ultimately get solved.”

Experts say the Sanumdong facility is where North Korea assembles its intercontinental ballistic missiles. The North conducted three flight tests of developmental ICBMs in 2017 that demonstrated their potential ability to reach the continental United States.

Following his last ICBM test in November 2017, Kim declared that his nuclear force was complete. But experts say North Korea still needs to master a few remaining technologies, such as ensuring that the warhead survives the harsh conditions of atmospheric re-entry, to have functioning ICBMs.

In early 2018, Kim expressed his intention to deal away his weapons arsenal in return for security and economic benefits. The North initiated diplomacy with Washington and Seoul and has since unilaterally suspended nuclear and missile tests and dismantled its underground nuclear testing site without the presence of outside experts.

It also dismantled parts of the Tongchang-ri rocket launch facility. North Korea had carried out satellite launches at the site in recent years, resulting in U.N. sanctions over claims that they were disguised tests of banned missile technology.

After a September summit with South Korean President Moon Jae-in in Pyongyang, Kim agreed to “permanently shut down” the Tongchang-ri engine test ground and rocket launch pad with the participation of foreign experts.

Trump said Kim told him in Vietnam that North Korea will continue to suspend nuclear and missile tests while negotiations are underway, and South Korea and the U.S. announced Sunday that they are eliminating massive springtime military drills and replacing them with smaller exercises in an effort to support the talks.