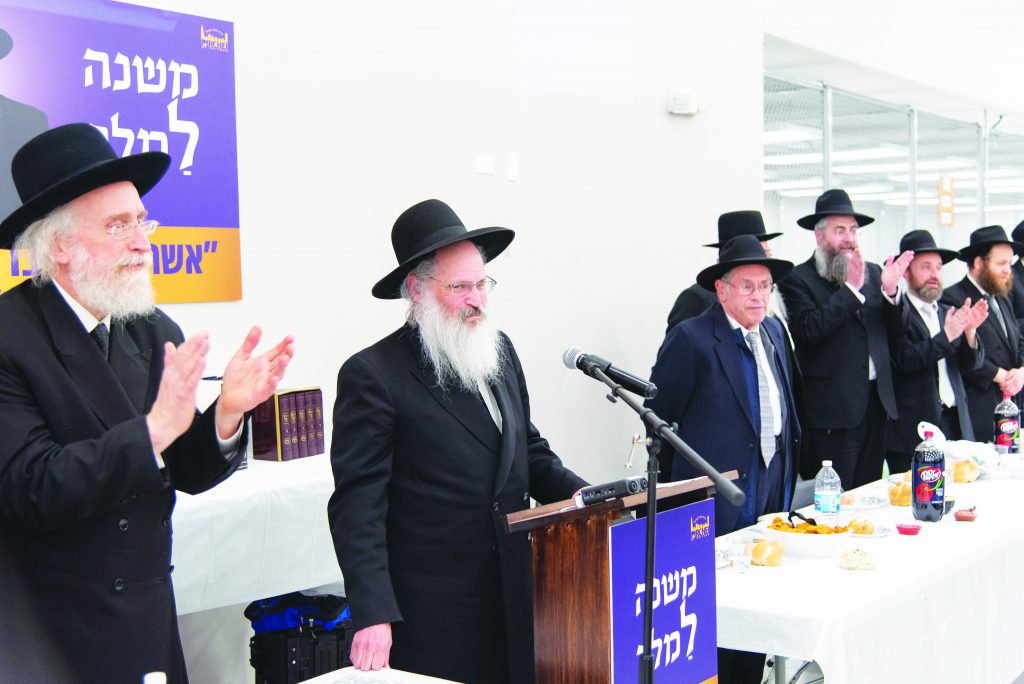 In his tzavaah, Harav Avrohom Chaim Levin, zt”l, Rosh Yeshivah of Telshe Chicago, asked that during the first year after his petirah, his talmidim and others learn mishnayos, l’iluy nishmaso.

While many took this as a humble request, the boys of Pirchei Agudath Israel of Chicago felt it was their chov kadosh, holy obligation.

They all knew that the Rosh Yeshivah had been the driving force in the establishment of a Pirchei in Chicago. They all knew that after recruiting Reb Nochum Leib ‘Nochi’ — “Mr. Pirchei” Stein — to start the first Pirchei groups in Chicago about 57 years ago, the Rosh Yeshivah was always involved in seeing that Pirchei would continue to grow and provide the boys of Chicago with as much Torah-true free-time programming as possible.

So, with this knowledge of how much the Rosh Yeshivah cared for them, the talmidim decided that they should show how much they cared for him. As a result, many of the talmidim in the city’s yeshivos ketanos and day schools committed to learn a certain amount of mishnayos, l’iluy nishmaso, knowing that their individual efforts would result in a city-wide siyum on the entire Shishah Sidrei Mishnah.

As soon as the program was launched, right before midwinter vacation, Rabbi Dovid Rifkind and Rabbi Elisha Klausner, Pirchei co-directors, went to work, distributing masechtos to the talmidim in grades six to eight, and even printing English translation copies to help those bachurim who committed to learn the more difficult masechtos.

All of this work and subsequent learning paid off, and the Siyum Mishnayos became a reality. On Sunday evening, February 24, the Dayan of Agudas Yisroel, Harav Shmuel Fuerst, many of the city’s Rabbanim and mechanchim, hundreds of talmidim and many proud fathers gathered to mark this important Torah milestone and demonstration of kvod haTorah.

The emcee of the event, Rabbi Zev Liberson, a Rebbi at Yeshiva Ohr Baruch and a close talmid of the Rosh Yeshivah, opened the evening by thanking the many people whose hard work on the logistics of the siyum made everything possible. He also extended a special thank you to Rabbi and Mrs. Yaakov Rajchenbach for their generous sponsorship of the siyum.

The program began as Tzvi Levin, a grandson of the Rosh Yeshivah, said the Hadran on Shishah Sidrei Mishnah. Kaddish was said by Harav Shmuel Yehuda Levin, current Rosh Yeshivah.

Upon conclusion of Kaddish, the hall was filled with shouts of mazel tov, followed by spirited and joyful dancing to the music of the Azamrah orchestra, led by Reb Shimmy Atlas, as a dance circle filled up the entire hall.

Rav Shmuel Yehuda Levin expressed his heartfelt feelings of hakaras hatov to all the participants, pointing out that every yeshivah ketanah in the city was represented at the siyum in a true, rarely seen, demonstration of ahavas Yisrael and kvod haTorah.

He also emphasized how his father, zt”l, truly loved all of the boys of Chicago and told the crowd how his father taught his own children and his thousands of talmidim over the years that a person’s tafkid is to help his tzibbur in whichever way and whenever possible.

He blessed the talmidim that they would learn this life’s lesson from the Rosh Yeshivah and they too would continue growing as bnei Torah and helping their respective kehillos grow as well.

Following Rav Levin’s remarks, the gathering was shown a specially prepared video of the late Rosh Yeshivah’s life. The program concluded as sefarim were raffled off to the boys, in recognition of their great effort.

In addition, a special picture of Rav Levin, zt”l, was given to all the mishnayos learners. It was truly a maamad of special kedushah and achdus.