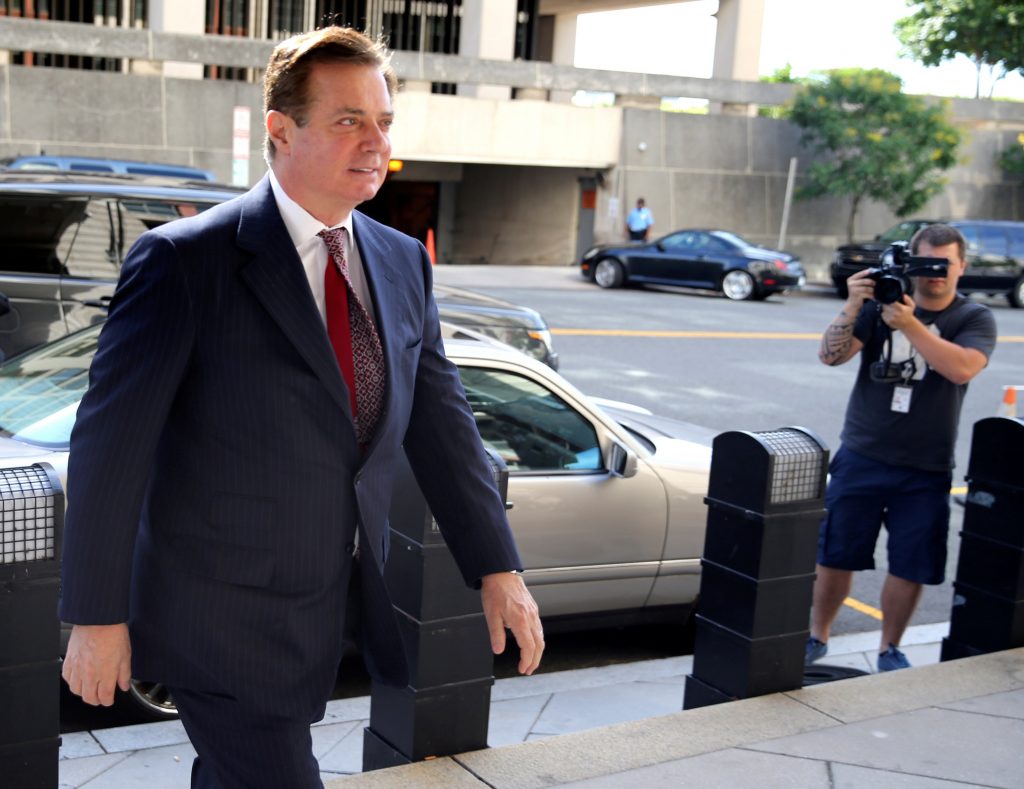 U.S. District Judge T.S. Ellis imposed the sentence of 47 months in prison on Manafort, 69, during the hearing in Alexandria, Virginia. Manafort, a veteran Republican political consultant, was found guilty last August by a jury of five counts of tax fraud, two counts of bank fraud and one count of failing to disclose foreign bank accounts.

Ellis also noted during the hearing that Manafort “is not before the court for any allegations that he, or anyone at his direction, colluded with the Russian government to influence the 2016 election.”

Manafort asked Ellis for mercy and thanked him for conducting a fair trial. He did not express remorse for his actions but talked about how the case has been difficult for him and his family. Manafort, who opted not to testify during his trial, told the court that “to say I have been humiliated and ashamed would be a gross understatement.” He described his life as “professionally and financially in shambles.”

Manafort, with noticeably grayer hair than just months ago, was brought into the courtroom in a wheelchair holding a cane, wearing a green prison jumpsuit emblazoned with the words “Alexandria inmate” on the back. It was a far cry from Manafort’s usual dapper appearance and stylish garb. He has been jailed leading up to his sentencing.

Manafort was convicted after prosecutors accused him of hiding from the U.S. government millions of dollars he earned as a consultant for Ukraine’s former pro-Russia government. After pro-Kremlin Ukrainian President Viktor Yanukovych’s ouster, prosecutors said, Manafort lied to banks to secure loans and maintain an opulent lifestyle with luxurious homes, designer suits and even a $15,000 ostrich-skin jacket.

His defense team argued he should get a lighter sentence because he had agreed to cooperate with the prosecution after he was convicted – though another judge found he breached that deal by repeatedly lying to prosecutors – and because his bid to secure a $5.5 million bank loan on fraudulent premises did not actually succeed. Ellis rejected those efforts.

Manafort faces sentencing in a separate case next Wednesday in Washington on two conspiracy charges to which he pleaded guilty last September.

While he faces a statutory maximum of 10 years in the Washington case, U.S. District Judge Amy Berman Jackson potentially could stack that on top of the sentence imposed in the Virginia case, rather than allowing the sentences to run concurrently.

Manafort is the only one of the 34 people and three companies charged by Mueller to have gone to trial. Several others including former campaign aides Rick Gates and George Papadopoulos, former national security adviser Michael Flynn and former Trump personal lawyer Michael Cohen have pleaded guilty, while longtime Trump adviser Roger Stone has pleaded not guilty.

Gates, a key witness against Manafort, has yet to be sentenced due to his ongoing cooperation with prosecutors.

Trump, who has called Mueller’s investigation a politically motivated “witch hunt,” has not ruled out granting a presidential pardon to Manafort, saying in November that “I wouldn’t take it off the table.”

Jackson on Feb. 13 ruled that Manafort had breached his agreement to cooperate with Mueller’s office by lying to prosecutors about three matters pertinent to the Russia probe including his interactions with a business partner they have said has ties to Russian intelligence.

Mueller is preparing to submit to U.S. Attorney General William Barr a report on his investigation into whether Trump’s campaign conspired with Russia and whether Trump has unlawfully sought to obstruct the probe. Trump has denied collusion and obstruction and Russia has denied election interference.

The crimes for Manafort was convicted did not directly relate to the 2016 election.

The sentencing capped a stunning downfall for Manafort, a prominent figure in Republican Party circles for decades who also worked as a consultant to such international figures as former Angolan rebel leader Jonas Savimbi, former Philippine President Ferdinand Marcos and Yanukovych.

Defense lawyers had asked Ellis to sentence Manafort to between 4-1/4 and 5-1/4 years in prison, writing in their sentencing memo that Mueller’s “attempt to vilify Mr. Manafort as a lifelong and irredeemable felon is beyond the pale and grossly overstates the facts before this court.”

Ellis had faced criticism by some in the legal community for comments he made during the trial that were widely interpreted as biased against the prosecution.

Ellis repeatedly interrupted prosecutors, told them to stop using the word “oligarch” to describe people associated with Manafort because it made him seem “despicable,” and objected to pictures of Manafort’s luxury items they planned to show jurors.

“It isn’t a crime to have a lot of money and be profligate in your spending,” Ellis told prosecutors during the trial.